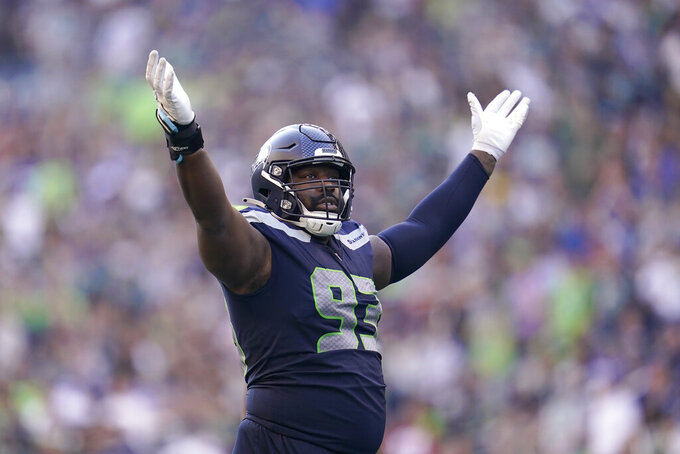 Seattle Seahawks defensive end Shelby Harris (93) gestures toward fans during the second half of an NFL football game against the Arizona Cardinals in Seattle, Sunday, Oct. 16, 2022. (AP Photo/Abbie Parr)

RENTON, Wash. (AP) — Shelby Harris was in a footrace, which usually is not what the Seattle Seahawks want one of their burly defensive linemen to be doing.

In this case, though, that moment of Harris chasing down New York Giants QB Daniel Jones and stopping him from reaching the first down was a perfect example of the effort that’s led an drastic turnaround for the Seahawks defense.

“It’s just selling out for the man next to you, a willingness to do anything that is asked of you,” Harris said. “I think that is the epitome of the whole team, everybody is willing to sell out for the person next to him, to buy in, and do what is needed to come home with a win.”

There’s a lot of good stories developing in Seattle with a team that’s among the biggest surprises nearing the midpoint of the regular season.

And near the top of that list is a defense that couldn’t stop anyone early in the season becoming one of the better units in the league over the past three weeks.

“We were all thinking that we had to get this rolling,” Seattle coach Pete Carroll said. “We all just kind of put our heads together, stayed together, stayed connected, and now we are on the end of it, and we are trying to really build something big.”

Less than a month ago, the Seahawks were among the worst defenses in the NFL as they struggled with an offseason change to a 3-4 alignment. They had allowed 84 points in a two-game span against Detroit and New Orleans and had just watched the Saints rush for 235 yards in a deflating loss.

Seattle found itself near the bottom of most major statistically categories on defense.

“I was obviously frustrated and pissed off to say the least, but on the other side of it, I’ve been through a lot harder things in my personal life,” Seattle defensive coordinator Clint Hurtt said.

“Going through some tough issues in football, we just have to keep coaching our way through it, keep on battling, and continue to show the support of the players of, ‘Hey, I’m with you, we are all in this thing together, and collectively, we will get this thing done.’”

It appears the Seahawks have gotten it done, at least for the past three weeks. Seattle has allowed just 45 total points in the past three games combined, and have managed to shut down the Cardinals, Chargers and Giants in different ways.

Last week against the Giants was potentially the most impressive of the three performances as New York entered with the second-best rushing offense in the league and was held to 78 yards rushing. The Giants only touchdown came following a Seattle turnover inside its 5-yard-line.

“New Orleans had a lot to do with it because for us up front, we feel like that was a game that got away from us. It was a game that all of us should have played better,” Harris said. “It was a matter of enough is enough.”

Well, the Seahawks did, specifically on the defensive line. Seattle adjusted after the New Orleans debacle and allowed its defensive linemen to be more aggressive, especially against the run. Rather than trying to read the play and occupy offensive linemen, the job has now become to be as disruptive as possible.

Seattle has also played more nickel of late with an extra defensive back — rookie Coby Bryant — on the field. That seems to have helped as well. The arrival of veteran Bruce Irvin and the continued strong play of Seattle’s secondary has contributed as well.

By some advanced metrics, the Seahawks are near the top of the league during this three-game stretch. Football Outsiders DVOA rating has Seattle’s defense first over the past three weeks after being 30th in the league the first five weeks of the season.

The Seahawks get another chance to test the validity of the changes they've made facing the Cardinals again on Sunday.

“I’ve been telling guys before, we had the same situation back in 2020, 2021 and started off kind of sloppy, but we ended up getting stuff together,” safety Ryan Neal said. “We came back to work, understood the importance of what we got to do.”

NOTES: QB Geno Smith was the NFC offensive player of the month, while rookie RB Kenneth Walker III and CB Tariq Woolen were NFL offensive and defensive rookies of the month all for the month of October. It’s the first time since the league started awarding rookie of the month in 1996 that players from the same team were honored in the same month.