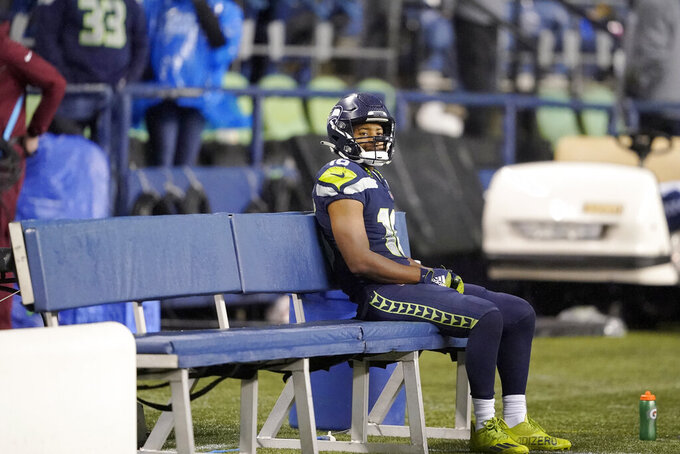 Seattle Seahawks' Tyler Lockett sits on the bench after his team lost to the New Orleans Saints in an NFL football game, Monday, Oct. 25, 2021, in Seattle. (AP Photo/Ted S. Warren)

The Seattle Seahawks are learning that life without quarterback Russell Wilson is rough, especially when making a series of blunders.

“I’ve been here a long time and if we didn’t have Russell, I probably wouldn’t have been here a long time because of all the magic he has created over the years,” Seattle coach Pete Carroll said. “He has numbers and stats and fourth quarter this and that’s one of the winningest quarterbacks in the history of the NFL. And it will be really fun when he comes back and plays football again for us this year.”

But whether Wilson will be returning to play any relevant games for Seattle this season is the big unknown after the Seahawks’ 13-10 loss to the New Orleans Saints on Monday night.

This loss was almost entirely self-inflicted as Seattle (2-5) dropped its third straight. Alvin Kamara and Jameis Winston made some plays offensively, and Demario Davis was a terror on the defensive side for New Orleans.

But Seattle may look back on this loss with significant regret, playing their second full game without Wilson, who could return sometime in November.

“People will look at our record and maybe have a different mindset about us,” Seattle running back Alex Collins said. “But we know we’re just one step closer to finishing and executing and getting those W’s.”

The Seahawks have lost three straight for the first time since 2011, when they finished 7-9 and missed the playoffs for one of two seasons in Carroll’s tenure. The last time Seattle started a season with three straight losses at home: 1992.

The mistakes made by Seattle on Monday were staggering and only crystalized that with Wilson out the Seahawks don't appear good enough to overcome so many miscues.

Wilson's replacement, Geno Smith, took several sacks in situations where he had to get the ball out of his hands. Jason Myers missed a pair of field goal attempts, one of which became decidedly longer because of a sack taken by Smith.

Marquise Blair was flagged for a personal foul on a third-down sack on New Orleans’ final drive when it appeared Seattle would get the ball back. Later in the drive, with a kicker in his first NFL game and lined up for a 43-yard field goal attempt, veteran Al Woods stunningly jumped offside, giving New Orleans a first down and eventually leading to an extra 90 seconds being burned from the clock.

With Wilson healthy, maybe Seattle can overcome those errors in a close, one possession game. Without him, it was too much to withstand.

“(Wilson’s) a special guy. Whenever you get, give him the ball back with some time left on the clock something’s going to happen,” Wagner said. “For me, I don’t need to be reminded. I know what he’s capable of doing. But I also know that Geno’s capable of executing and I have faith in him.”

It’s now three straight weeks that’s Smith had a opportunity in the final seconds to give Seattle the chance at a tie or victory. He threw an interception late against the Los Angeles Rams after Wilson was hurt. He fumbled in overtime last week to set up Pittsburgh’s game-winning field goal. And against the Saints, Smith took a pair of sacks that left Seattle in a desperation fourth-and-28 situation that came up empty.

All those mistakes aren’t entirely on Smith, but it also reinforces how good Wilson’s been in those situations in the past.

“No one’s happy about it. It’s another close game for us, we had a chance right there at the end. It’s tough,” Smith said. “But one thing I know about these guys is no one’s going to quit. No one is going to point a finger. We’re all gonna pick up what we need to pick up, and we’re all going to get better.”