Seahawks confident ugly numbers on defense will turn around 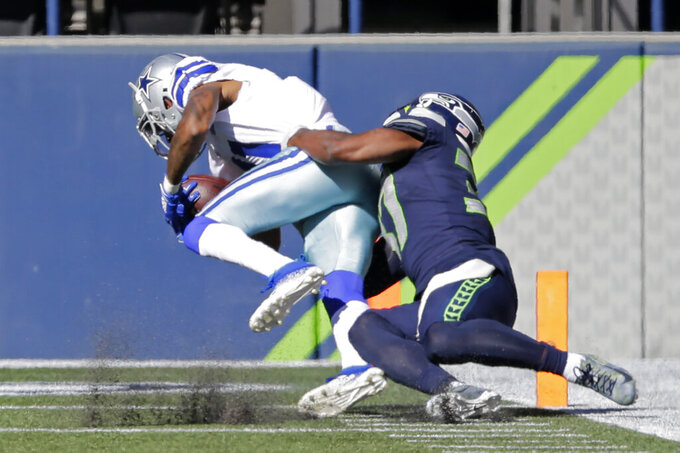 RENTON, Wash. (AP) — Pete Carroll is confident a change is coming. So are Bobby Wagner, Ken Norton Jr. and others.

The Seattle Seahawks defense can’t be this bad and give up this many yards and points all season long, right?

The numbers are so unlike Seattle that they jump off the page. The defense that once allowed just 2,752 yards passing for the entire 2013 season has allowed nearly half that total through three weeks.

The frustration is growing, even with the Seahawks off to a 3-0 start. They’re aware they're undefeated because of Russell Wilson and Seattle’s offense. And while Wilson has been great — he was named NFC player of the month Thursday — they know it’s unfair to expect so many points every week.

“Sometimes we look like we haven’t been practicing a whole lot on the back end,” Carroll said. “We have been. We just have to do better and I really can’t imagine we’re not going to do this a whole lot better here in the coming weeks.”

Certainly time and situation have played a major role in why the numbers are so abnormal for the defense. For as great as he’s been, Wilson and the Seahawks offense are perhaps scoring too quickly. Seattle is averaging 1 minute, 54 seconds per offensive drive, tied for third shortest in the league. Last year, Seattle averaged 2:40. The year before, it was 2:46.

Building big leads has also been a huge factor. Seattle led Atlanta by 19 in the fourth quarter. The Seahawks led New England by 11 late in the third quarter. Last week against Dallas, the Seahawks had a 15-point third quarter lead.

So clearly teams are having to play catch up. Coupled with Seattle’s ability to slow down the running game, passing has become the obvious path.

But this successful? Against Seattle?

One thing that could be playing into this is the way the Seahawks have wanted to use new strong safety Jamal Adams. Adams is such a dynamic talent and so versatile that Seattle has seemed intent on having him doing a little of everything, whether it’s playing coverage or blitzing the quarterback. According to Pro Football Reference, Adams has been used on the blitz 31 times in three games.

But he’s had issues in pass coverage — notably against New England — and using him to bolster the weak pass rush has created more space in the defensive backfield, especially when that pass rush isn’t successful.

Adams and Quinton Dunbar are newcomers this season, and it’s the first full season for free safety Quandre Diggs after being acquired midway through the 2019 season. But Adams and Dunbar may miss Sunday's game at Miami due to injuries, and that may limit how exotic Seattle can be on defense.

“Over the years you create certain nonverbal communications or you get used to working with a certain person and you guys might play a certain play one way,” Wagner said. “Then somebody comes in and you have to either explain how you guys are playing that play or adjustments. Sometimes that happens in the game and you’re trying to adjust on the fly. The whole thing as far as the pass game, we just have to do better.”

Norton, Seattle’s defensive coordinator, is trying to stay as optimistic as possible while noting that there needs to be individual responsibility and accountability to cut down on the big plays being allowed.

"You’ve got to take care of your personal role first before you start looking around,” Norton said. “I think once we continue to take that responsibility about doing your job, I think that things will change.”