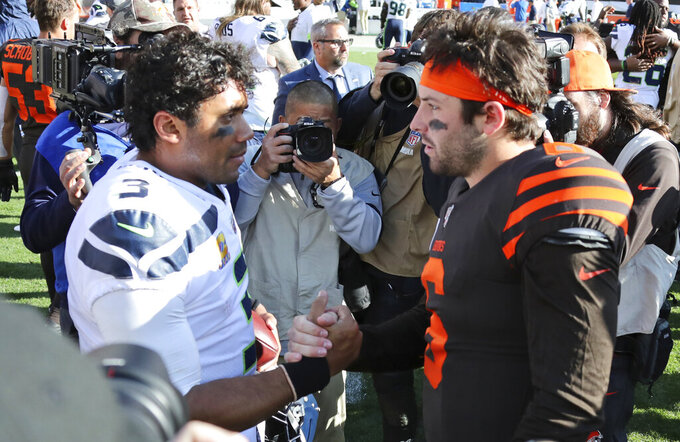 Seahawks tight end Will Dissly, whose 2018 season ended after four games when he tore his right patellar tendon, was seriously hurt again, suffering an Achilles injury in Seattle's 32-28 victory over the Cleveland Browns on Sunday.

Dissly, who went down untouched in the second quarter, had been a reliable target for Russell Wilson during the Seahawks' first five games, with 23 receptions for 262 yards and four touchdowns. He did not record a catch on Sunday.

"It's serious. It's a big loss," coach Pete Carroll said. "He's been playing great football. It's a really devastating injury for him."

Browns quarterback Baker Mayfield was escorted to the locker room with a hip injury but returned to the game. Cleveland defensive tackle Daniel Ekuale sustained a head injury in the closing minutes.

The Philadelphia Eagles lost left tackle Jason Peters to a left knee injury in their loss to the Minnesota Vikings. Peters returned briefly after getting hurt in the second quarter before leaving for good. Linebacker Nigel Bradham didn't return after hurting an ankle in the second quarter. The Vikings' left tackle, Riley Reiff, was also hurt, suffering an ankle injury.

Jaguars receiver Marqise Lee, who missed all of last season after tearing three ligaments in his left knee, injured his right foot/ankle in the third quarter of Jacksonville's loss to New Orleans and had to be helped to the locker room. Jaguars cornerback D.J. Hayden left in the fourth and was evaluated for a concussion.

Bengals cornerback Dre Kirkpatrick was carted off the field in the first quarter and did not return as Cincinnati remained winless with a loss to the Ravens. Guard John Miller left in the second quarter with a groin injury and did not return.

In the Redskins' victory over the Dolphins, Washington running back Chris Thompson left in the third quarter with a foot injury, and tight end Jerome Cunningham injured a knee in the fourth quarter.

In London, Tampa Bay safety Jordan Whitehead had an apparent shoulder injury in the fourth quarter of the Buccaneers' loss to the Carolina Panthers.

Wide receiver Emmanuel Sanders sat out the second half of the Denver Broncos' shutout win over the Titans with a knee injury. Tennessee lost linebacker Jayon Brown to a groin injury on its second defensive snap.

Rams left guard Joe Noteboom was carted to the locker room with a right knee injury in Los Angeles' loss to San Francisco. Safety John Johnson exited in the second half for the Rams, who also did not have running back Todd Gurley because of a thigh bruise.

By Cliff Brunt 47 minutes ago
By Juan A. Lozano an hour ago
5 hrs ago
By Arnie Stapleton 13 hrs ago
22 hrs ago