Seahawks enter camp with questions about the defensive line 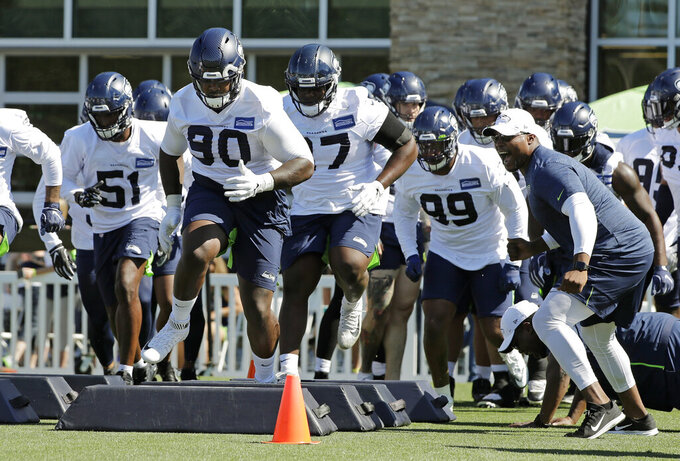 RENTON, Wash. (AP) — For a second straight year, the Seahawks enter training camp with questions about their defensive line.

The issue a year ago was how the team was going to generate a pass rush following the departures of Michael Bennett and Cliff Avril. Frank Clark and Jarran Reed combined to fill that void by racking up a combined 23.5 sacks. In the process, Reed became just the third defensive tackle in franchise history to post double-digit sacks, after Cortez Kennedy and John Randle.

Now Clark is in Kansas City following an offseason trade, and Reed is set to miss the first six games of the season after being suspended for a violation of the NFL's personal conduct policy because of an alleged domestic violence incident in April 2017.

"Whenever we lose somebody, you know, it's the next guy up and that's what this situation will call for," coach Pete Carroll said. "He'll work with us all through camp and all that and then he'll have to leave. But in the meantime, it's a competitive opportunity for other guys who we are going to watch unfold."

Key free agent acquisition Ezekiel Ansah isn't expected to practice until the latter stages of training camp as he continues to rehab from shoulder surgery.

"His shoulder is healed, it's solid," Carroll said. "They did all of the retesting again, just in the last couple days, to ensure that. He's got a little bit of soreness in the lifting coming back, but really nothing to hold him back. It's just a matter of keep getting stronger and making sure it's really secure before we go."

Ansah had 14.5 sacks in 2015 and 12 sacks in 2017 for the Lions. Seattle signed him in May. The need for pass rush help was glaring prior to Ansah's addition and is again in the spotlight because of Reed's suspension.

The Seahawks will need younger players such as Quinton Jefferson, Rasheem Green, Jacob Martin and first-round pick L.J. Collier to step up and fill the void.

"It's a big loss but then again it's a big opportunity for our other guys, even myself," Jefferson said. "I've got a lot more on my plate out there and I'm expected to do a lot more. It's fun. Guys are going to have to step up. It should still be a fun year. I don't expect any drop-off because I'm confident in the guys we're going to have out there.

Notes: Linebacker Bobby Wagner was again a spectator on day two of camp as he seeks a contract extension. After wearing a sweat suit the first day, Wagner wore his helmet and jersey Friday but didn't take part in drills. . Tight end Will Dissly caught passes during individual work early in practice as he is eased back in. He tore a patella tendon in October.