Seahawks have solved pass rush question with Reed and Clark 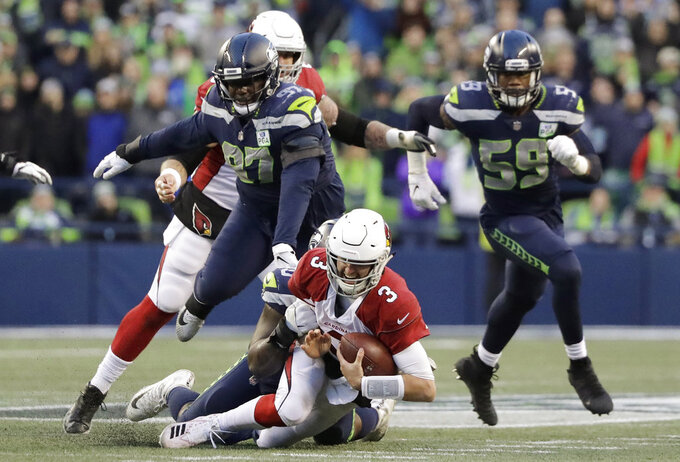 RENTON, Wash. (AP) — Frank Clark and Jarran Reed knew one of the biggest questions about the Seattle Seahawks before the season began surrounded them.

The loss of Michael Bennett and Cliff Avril on the defensive line left massive concerns about whether the Seahawks had the personnel to be effective rushing the passer and creating enough havoc for opposing offenses.

As the only proven returners to Seattle's pass rush group, Clark and Reed needed to be productive to a level neither had before.

The pair responded with two of the best seasons ever by Seahawks pass rushers and helped Seattle back to the postseason. Clark finished with 14 sacks, the most by a Seattle player since Patrick Kerney had 14½ in 2007. Reed added 10½ sacks, just the third defensive tackle in franchise history to reach double-digits in sacks in a single season.

The pair combined for the most sacks by any set of Seattle teammates in a single season since Mike McCrary and Michael Sinclair had 26½ combined in 1996.

"For (Reed) to get 10½ (sacks) this year, I think my high before this year was 10½. Just seeing my boy, him being able to take on the challenge under the duress of us not having all that we had, it's just great to see," Clark said. "It just shows us young guys what our ceiling really is."

The pressure on Clark this season has been significant. He was the one proven pass rusher the Seahawks had coming off the edge and was going into the final year of his rookie contract. Clark had 19 sacks in the previous two seasons, but that was playing in a rotation with Bennett and Avril, often all three rushing together in passing situations.

This was the year for Clark to prove he could handle being the focus. And his response likely made him a ton of money in 2019, either playing on the franchise tag in Seattle or signing a lucrative long-term deal either with the Seahawks or as a free agent. The franchise tag number for defensive ends is likely to be more than $18 million next season.

"I'm not sure if you guys see him on Sundays but that dude is different. I've never seen someone so explosive, so twitchy, just how he moves is different," Seattle rookie defensive end Jacob Martin said of Clark. "That dude is an amazing athlete."

Reed and Clark were one of three combos from the same team to finish with double-digit sacks, joining the Kansas City combo of Chris Jones and Dee Ford, and Denver's Von Miller and Bradley Chubb. But Clark and Reed is the only combo that includes a primary defensive tackle and why the emergence of Reed as a pass rusher this season has been so important.

"You could tell the first day we started the offseason program he wanted to be on third down. He wanted to be a dominant player that plays all three downs and he wasn't shy about it and he was willing to work for it," Seattle defensive coordinator Ken Norton Jr. said of Reed.

Reed had just three sacks through his first two seasons and only 12 quarterback hits. He doubled his QB hits this season to go along with the 10½ sacks, showing that even when he wasn't getting to the quarterback he was doing his part providing the needed push from the inside.

He is one of three defensive tackles in franchise history with at least 10 sacks in a season joining Hall of Famers Cortez Kennedy and John Randle. Kennedy did it only once in his career when he had 14 in 1992 while being named the NFL Defensive Player of the Year. Randle had 11 sacks in 2001, his first of three years with Seattle.

"I'm not surprised. I knew I had it in me all along," Reed said. "Everybody is just seeing it. It was new to everybody."