Seahawks have top 10 draft pick for first time since 2010 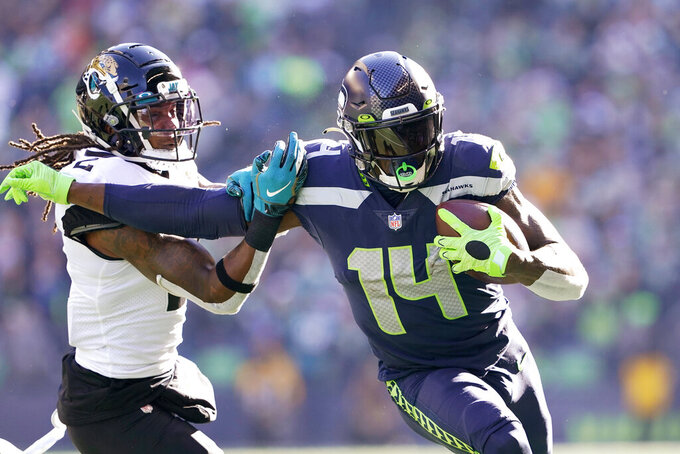 FILE - Seattle Seahawks' DK Metcalf (14) pushes off of Jacksonville Jaguars' Rayshawn Jenkins as he runs with the ball during the first half of an NFL football game, Sunday, Oct. 31, 2021, in Seattle. The Seahawks are embarking on the most important draft in a decade. (AP Photo/Ted S. Warren, File)

LAST SEASON: The Seahawks endured their worst record in long tenure of Pete Carroll finishing at 7-10 and missing the playoffs for only the second time since 2012. Quarterback Russell Wilson suffered a finger injury that caused him to miss three-plus games. Wilson rushed his return from surgery and wasn’t the same for several weeks before an impressive late push. Running back Rashaad Penny was a revelation late in the season and was the most productive rusher in the league over the final month in one of the few bright spots. Tyler Lockett set a career high in yards receiving and DK Metcalf a career best in touchdown receptions, but Seattle’s offense was frustratingly inconsistent for much of the season. Safety Quandre Diggs was a Pro Bowl selection while Bobby Wagner and Jordyn Brooks were among the league leaders in tackles. But Seattle’s defense ranked 28th in the league overall and 31st at stopping the pass. Seattle fired defensive coordinator Ken Norton Jr. after the season, promoted Clint Hurtt to defensive coordinator and hired Sean Desai as assistant head coach of the defense.

OUTLOOK: The Seahawks are embarking on the most important draft in a decade since the 2012 draft that landed the franchise Wilson, Wagner and DE Bruce Irvin in the first three rounds. Trading Wilson and releasing Wagner was the conclusion to the most successful chapter in franchise history. But if Seattle is to write another chapter of success during Carroll’s tenure it has to land impact players in this draft. Both offensive tackles spots are unfilled. Another inside linebacker is needed to play alongside Brooks. Starting cornerback D.J. Reed signed with the Jets in free agency. And hanging over all those needs is whether Seattle believes the heir apparent to Wilson is available in this draft or if the quarterback class of 2023 may be more attractive for the Seahawks.