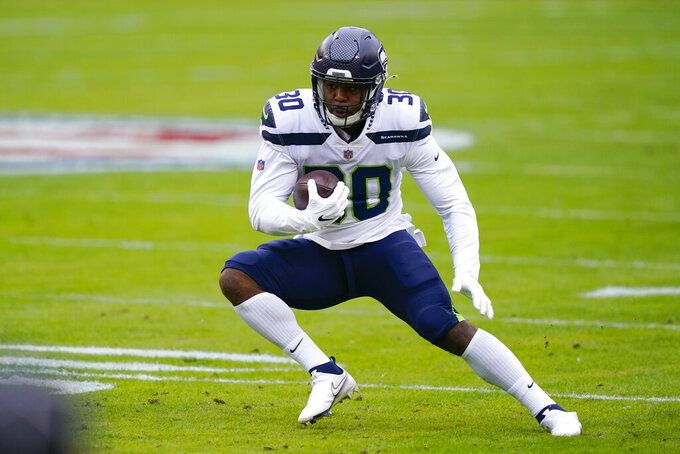 Seattle Seahawks running back Carlos Hyde (30) runs with the ball during the first half of an NFL football game against the Washington Football Team, Sunday, Dec. 20, 2020, in Landover, Md. (AP Photo/Susan Walsh) 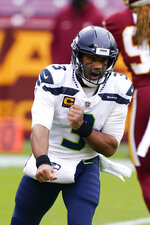 LANDOVER, Md. (AP) — Russell Wilson asked Carlos Dunlap to make a play to get the Seattle Seahawks into the playoffs, and the veteran defensive end was all too eager to deliver.

Dunlap shook off a lingering foot injury and sacked Washington's Dwayne Haskins to shore up a 20-15 victory Sunday that clinched a playoff spot. It's Seattle's ninth berth in 11 seasons under coach Pete Carroll but Dunlap's first crack at the postseason since 2015 and safety Jamal Adams' first in his NFL career.

“I know you guys are used to Seattle always going to the playoffs — I’m not used to this,” said Adams, who extended his single-season sacks record for a defensive back. Adams couldn't contain his excitement after another game he played with two broken fingers. “I’m just excited. It feels good, man. This is what you dream of.”

Carroll called it a “sweet win," brushing off a rough fourth quarter to celebrate another accomplishment. Russell Wilson threw for a touchdown, Carlos Hyde ran 50 yards for a score, and the Seahawks (10-4) picked off Haskins twice to build a big lead before holding on with a big defensive stop in the final minutes.

It was only fitting Dunlap had the big sack on third-and-15 with just over a minute left, given his lengthy playoff drought.

Washington (6-8) still has that opportunity in the NFC East, even though its winning streak was snapped at four with Alex Smith out because of a calf injury. Haskins finished 38 of 55 for 295 yards, a TD pass and the two interceptions.

“There were some plays I’d want back, for sure,” Haskins said. “It was definitely a hard fought game.”

Wilson threw for 121 yards and a 10-yard TD pass to Jacob Hollister and ran for 52 on six carries. Hyde's 50-yard TD run was Seattle's longest rushing play of the season.

Adams’ sack of Haskins in the first quarter gave him 9 1/2, adding to his single-season record for a defensive back since the NFL began tracking the stat in 1982. Adams also became the first DB in that time to have a sack in four consecutive games.

Adams went to the locker room for a finger injury in the third quarter but didn't miss a series. He said he has been playing with two broken fingers for a couple of weeks, insisting the injury doesn't slow him down.

When coach Ron Rivera benched Haskins after a 1-3 start to the season, he felt the offense was in better hands with an experienced QB. Haskins did well enough in relief of Smith last week, but his inexperience was on display against Seattle.

"I feel like he tried to do the best that he could after turnovers," receiver Terry McLaurin said. "We have to make some of those bang-bang plays to help the quarterback."

Beyond the interceptions, the 2019 first-round pick struggled with situational awareness for much of the day. Rivera said Smith would start next week if healthy.

Seahawks: Rookie running back DeeJay Dallas was carted off after injuring his right ankle on kickoff coverage. Carroll said X-rays were negative and Dallas had a sprained ankle. ... Seattle played much of the game without two starters on the offensive line after left guard Mike Iupati departed with a neck injury. Right tackle Brandon Shell was inactive with an ankle injury.

Washington: Linebacker Shaun Dion Hamilton left with an elbow injury. ... Right tackle Morgan Moses missed time in the second half with a leg injury. ... Along with Smith's absence, standout rookie running back Antonio Gibson missed a second consecutive game because of a toe injury, and linebacker Cole Holcomb was out with a concussion.

The Seahawks host the Los Angeles Rams next Sunday with first place in the NFC West at stake, while Washington hosts Rivera's old team, the Carolina Panthers.