Seahawks' Janikowski out after hurting thigh on 57-yard miss 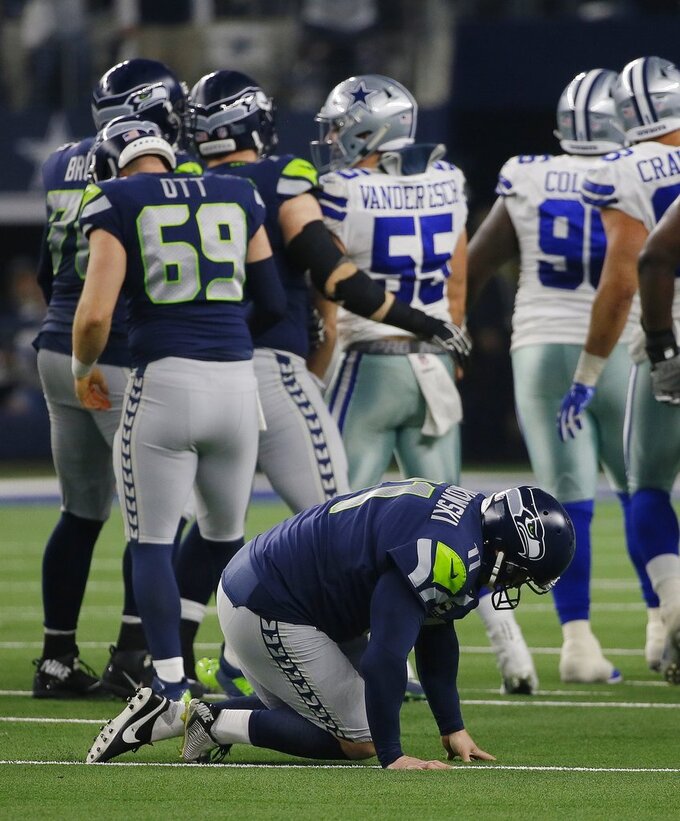 Seattle Seahawks place kicker Sebastian Janikowski (11) falls to the ground after suffering an unknown injury to his left leg attempting a long field goal attempt against the Dallas Cowboys in the first half of the NFC wild-card NFL football game in Arlington, Texas, Saturday, Jan. 5, 2019. (AP Photo/Roger Steinman)

ARLINGTON, Texas (AP) — Seattle kicker Sebastian Janikowski is out of a wild-card playoff game against the Dallas Cowboys after injuring his thigh while missing a 57-yard field-goal try on the final play of the first half.

The 40-year-old Janikowski grabbed the back of his left leg and yelled as the kick sailed wide right Saturday night. He limped to the locker room.

Rookie punter Michael Dickson tried some short field goals during halftime, with mixed results. The Seahawks have also pondered using Dickson for drop-kicks in field-goal situations. He had several drop-kicks during the season, as recently as Week 16 when Janikowski left with an injury but returned to the game.

The Seahawks went for it on fourth-and-5 from the Dallas 39 in their first possible field-goal situation of the second half, converting on Russell Wilson's 22-yard pass to Doug Baldwin. After Wilson ran 4 yards for a touchdown, Mike Davis scored on a 2-point conversion run for a short-lived 14-10 Seattle lead.