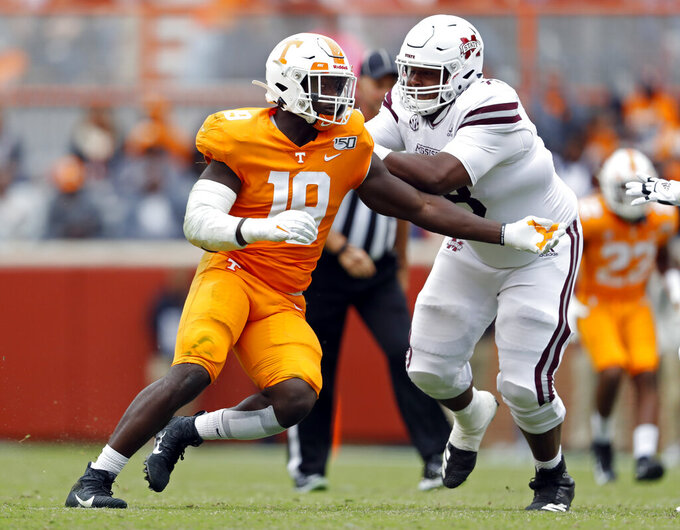 FILE - In this Oct. 12, 2019, file photo, Tennessee linebacker Darrell Taylor (19) plays against Mississippi State in the second half of an NCAA college football game in Knoxville, Tenn. Taylor was selected by the Seattle Seahawks in the second round of the NFL football draft Friday, April 24, 2020. (AP Photo/Wade Payne, File)

SEATTLE (AP) — Before the coronavirus pandemic shut down most of the NFL's pre-draft process, the Seattle Seahawks were able to get a couple of prospects to visit the Pacific Northwest for an evaluation.

Tennessee pass rusher Darrell Taylor was one of those few. Clearly, the Seahawks were impressed, to the point of trading up to get him.

“He was just a very impressive young man with an edge, and he’s got a chip and he’s mad that he didn’t have a better season,” general manager John Schneider said.

Seattle may have waited until the second round, but the team addressed its biggest need entering the draft by selecting Taylor on Friday night.

It was the first of two selections Seattle made, along with LSU offensive lineman Damien Lewis, on a night where it pulled off a couple of trades.

The Seahawks traded with the New York Jets to move up 11 spots and select Taylor. The Seahawks gave the Jets the No. 59 overall pick in the second round and Seattle's only third-round pick at No. 101 overall. Seattle then added Lewis early in the third round following a trade with Carolina that gave Seattle an additional fifth-round pick on Saturday.

Taylor is 6-foot-4 and 267 pounds and fits the mold of the type of pass rusher Seattle wants coming off the edge. Taylor was second in the SEC last season with 8 1/2 sacks. For his career, Taylor had 19.5 sacks overall, good for 10th-most in school history.

Coach Pete Carroll said Taylor has traits similar to those of past edge rushers who have thrived in the Seahawks’ system, such as Chris Clemons, Cliff Avril and Frank Clark.

“We thought he was the absolute in the pocket guy for us and so that was an easy evaluation in that regard," Carroll said. “We’re very happy to get him and we know he’s gonna have a chance to contribute early.”

Taylor said he played last season with a stress fracture in his lower leg. He had surgery in late January to have a titanium rod inserted in his leg and said he expects to be fully healthy whenever the season begins.

Taylor said he believes he can be better using his hands against blockers but was excited about the chance to work with Seattle's defensive coaches and see how they can help elevate his game.

“They will help me be the best pass rusher in the NFL that we will see this rookie season," Taylor said. "I bring a lot to the table. I can run, I can cover. I can do whatever you ask, whether you want a linebacker or a defensive end.”

Seattle added veterans Bruce Irvin and Benson Mayowa in free agency but landing a pass rusher was a huge priority for the Seahawks during the draft. Seattle is still hoping to retain Jadeveon Clowney, but Schneider said this week that the team has needed to move forward with its plans while it waits for Clowney's decision.

Lewis started all 28 games during his two seasons at LSU after transferring from a junior college. Lewis was a second-team All-SEC selection during his senior season and his strength as a run blocker clearly fits with Seattle's desire to keep focusing on the run game.

Lewis said he was playing “Madden ‘20” the other day as the Seahawks when one of his best friends predicted he’d be picked by Seattle. He is 6-foot-2, 329 pounds and his versatility may have been another enticement for Seattle. Lewis has played both guard positions and did some work at center during the Senior Bowl.

Depending on how quickly he picks up the system, Lewis could be in competition with D.J. Fluker for the right guard spot. At the very least, Lewis could be an heir apparent at the spot.

“I’m ready to get down there, go compete and make an impact on day one,” Lewis said. “Get to learn the system, get to know everybody, come in and bring something special to the team.”