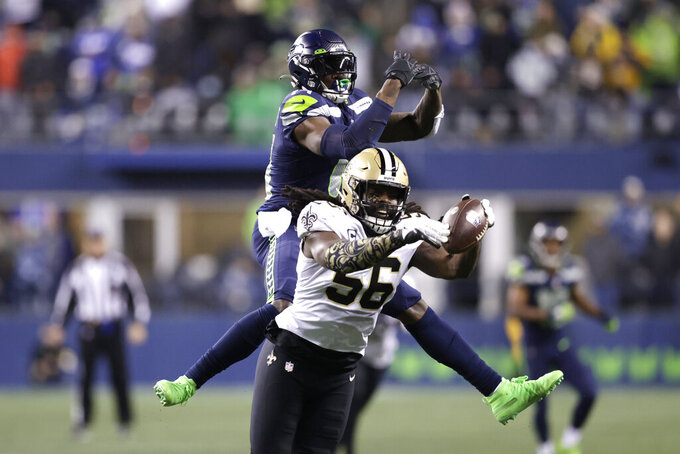 New Orleans Saints' Demario Davis (56) breaks up a pass intended for Seattle Seahawks' DK Metcalf in the final minute of the second half of an NFL football game, Monday, Oct. 25, 2021, in Seattle. (AP Photo/John Froschauer)

RENTON, Wash. (AP) — The previous time Pete Carroll and the Seattle Seahawks found themselves sitting at 2-5, the expectations were different.

That was 10 years ago when the Seahawks were in transition and still laying the foundation of their eventual rise. It was before the arrival of Russell Wilson as their franchise quarterback, before the drafting of Bobby Wagner as their defensive anchor.

That is why the Seahawks' 2-5 start to this season, punctuated by Monday’s 13-10 loss to New Orleans, is so concerning and is beginning to feel like a backslide out of contention and into mediocrity.

“It’s not a great feeling,” Wagner said. “It’s not a position that we thought we were going to be in, and it’s just back to the drawing board for me.”

It was an ugly defeat, highlighted by a lethargic offense, poor decision-making from quarterback Geno Smith taking too many sacks, two missed field-goal attempts and some baffling defensive penalties.

The Seahawks were supposed to still be contenders this season, but have looked outclassed and lost with Wilson sidelined by a finger injury. They’ve lost three straight and are quickly running out of time to salvage something from this season.

“We’re not giving up on ourselves,” Seattle linebacker Jordyn Brooks said. “People outside these walls may be pointing the finger and giving up on us, but we’re going to stick together. We’re going to figure it out.”

After getting ripped earlier in the season, Seattle’s defense deserves a little credit for being better the past two weeks at not giving up so much yardage and time of possession. The Saints had just 304 yards, a season low allowed by the Seahawks. The Saints held the ball for nearly 33 minutes, but a significant chunk of that possession time came after costly penalties by the Seahawks that kept New Orleans drives going.

It’s baby steps for a defense that was shredded earlier in the season, but perhaps a sign that continued improvement can be made.

Of course, the Seahawks are without their franchise quarterback, but Shane Waldron was supposed to bring ingenuity and creativity to Seattle’s offensive schemes. So far, they’ve seemed rather pedestrian and that was before Wilson was injured. Take away Week 1 against Indianapolis and the flare Waldron was supposed to bring from his time in Los Angeles has seemed fleeting. The Seahawks have topped 350 yards only once in the past four games and the 219 total yards against the Saints was the lowest for Seattle since a late December 2017 win at Dallas when it had just 136 total yards.

The interior of Seattle’s defensive front, led by Poona Ford, Bryan Mone and Al Woods did an exceptional job of keeping Alvin Kamara from dominating the ground game. Even though he was difficult to stop as a pass catcher, Kamara was held to 51 yards rushing and 2.55 yards per carry. Woods did have one big error, though, jumping offside on a Saints field-goal attempt in the fourth quarter that extended the drive.

Kicker Jason Myers was automatic during the 2020 season and eventually had a franchise record of 37 straight made field goals. That streak was snapped in Week 3 against Minnesota and over the past five games Myers has been average at best. Myers is 5 for 9 over those five games, including two misses on Monday night. Myers missed from 53 yards toward the open end of the stadium which is a more difficult direction to kick. But his 44-yard miss in the first half in the opposite direction was a more costly miss in the grand scheme of how the game played out.

Safety Marquise Blair suffered another major injury to his right knee late in the loss to the Saints. Blair fractured the patella in his right knee, Carroll said on his radio show Tuesday morning. He suffered a torn ACL in the knee early in the 2020 season. ... Guard Damien Lewis (shoulder) and pass rusher Darrell Taylor (neck) were both inactive against New Orleans, but Carroll hopes they’ll be able to play against Jacksonville.

29 — The previous time Seattle opened the season with three straight home losses was 29 years ago. In 1992, Seattle lost its first five at home before beating Denver in overtime in Week 13.

If there is such a thing as a must win for a 2-5 team, it comes this Sunday when Seattle hosts Jacksonville. A loss and the season might as well implode. A win at least gives the Seahawks a modicum of momentum going into their bye week and the chance that Wilson’s return could be on the horizon.