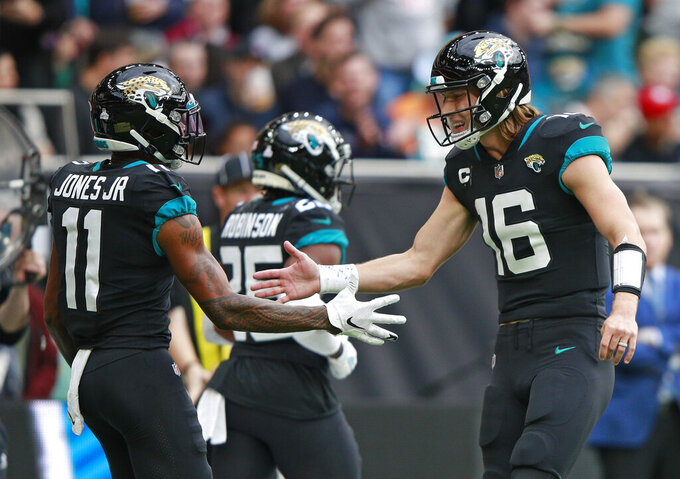 OPENING LINE: Seahawks by 3 1-2, according to FanDuel SportsBook

TURNOVER DIFFERENTIAL: Jaguars minus-10; Seahawks plus-3.

JAGUARS PLAYER TO WATCH: CB Shaquill Griffin. The former Seahawks cornerback let Seattle in free agency last offseason. Griffin doesn’t have an interception yet, but has played every snap Jacksonville and allowed an 89.1 passer rating against, the lowest mark of his career to this point of a season. He’ll face a steep challenge matching up with former teammates DK Metcalf and Tyler Lockett.

SEAHAWKS PLAYER TO WATCH: QB Geno Smith. With Seattle having its bye following this game, there is a slight chance Russell Wilson could be ready to return from injured reserve following the bye. If Wilson is ready to go, the matchup with the Jags could be the last chance for Smith to show his capability as a starting quarterback. So far, the results haven’t been great. He was excellent late in a loss to the Rams after Wilson was hurt, but made significant mistakes in the losses to Pittsburgh and New Orleans.

KEY MATCHUP: Old Seahawks vs. Current Seahawks. Jacksonville’s roster and coaching staff is littered with former Seattle connections, from Griffin, TE Jacob Hollister and backup RB Carlos Hyde on the field to special teams coordinator Nick Sorensen, passing game coordinator Brian Schottenheimer, and offensive coordinator Darrell Bevell. Five of the six were with the Seahawks a season ago. Can their knowledge of system and players give the Jaguars any sort of an advantage?

KEY INJURIES: Jacksonville should be mostly healthy coming off its bye week. ... Seattle should get back pass rusher Darrell Taylor (neck) and offensive lineman Damien Lewis (shoulder) after both missed last week’s game with injuries.

SERIES NOTES: This will be the ninth all-time meeting. Seattle has won the past two matchups at home back in 2009 and 2013, but the Jaguars won the last one in 2017 in Jacksonville. The Jags scored 27 second-half points and Leonard Fournette rushed for 101 yards and a score in the victory.

STATS AND STUFF: Jaguars RB James Robinson has scored a touchdown in four straight games. He needs 10 yards from scrimmage to go over 2,000 for his career, and would be the second fastest in franchise history to reach that mark behind only Fred Taylor. ... QB Trevor Lawrence became the first rookie QB to win an NFL game played in London in the Jaguars’ last game vs. Miami. Lawrence threw for 319 yards and a TD in the win. ... The Jaguars haven’t won consecutive games since Weeks 7 and 8 of the 2019 season. ... The Seahawks are 2-5 for the first time since midway through the 2011 season when they were 2-6. ... Seattle has started a season 0-3 at home for the first time since 1992. ... Metcalf’s 84-yard TD catch last week vs. the Saints was the third longest in franchise history.

FANTASY TIP: Lockett has disappeared from the Seattle offense since Week 2. Lockett had just two catches in each of the past two games, hasn’t topped 57 yards receiving in the past four, and hasn’t found the end zone since Week 2. Probably smart to stay away until Wilson returns.