Seahawks may turn to committee approach at nickel back 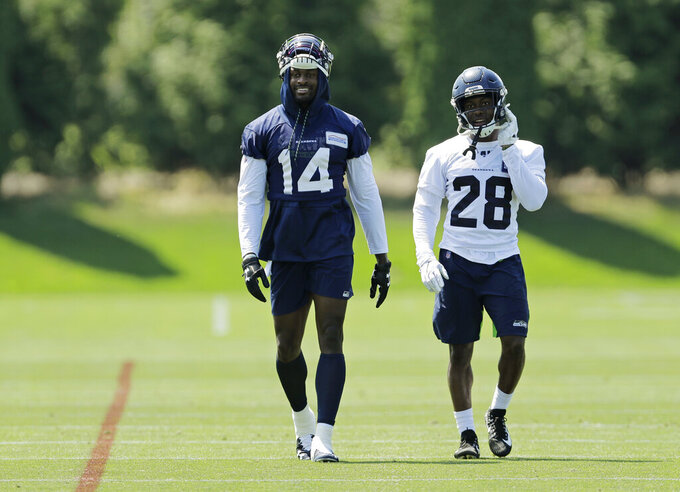 RENTON, Wash. (AP) — The Seahawks may turn to a corner-by-committee strategy to replace Justin Coleman as their nickel back this season.

Coleman signed a four-year deal with the Detroit Lions in free agency after serving as Seattle's slot cornerback for the last two seasons. He had played more than two-thirds of the team's defensive snaps in 2018 as the Seahawks used more five and six defensive back packages.

Now the Seahawks don't have a single clear option to take over the role. Instead, they have four different cornerbacks vying for the job heading into the second preseason game. Akeem King, Kalan Reed, Jamar Taylor and fourth-round pick Ugo Amadi have all had a chance to show what they can do during training camp.

Carroll indicated the job could be filled by having interchangeable pieces on a weekly basis instead of one guy in the spot full-time.

King was used occasionally in the role last season against bigger slot receivers. He was called upon to match up with Kansas City Chiefs tight end Travis Kelce in Week 16. But while King may be the right fit to match up against Kelce or bigger receivers such as Larry Fitzgerald, Reed, Taylor or Amadi may be better at covering shiftier players like Tyreek Hill or Taylor Gabriel.

King and Amadi appear to be locks for the roster while Taylor, a six-year veteran, and Reed try to show they deserve spots as well.

"I think it's harder for the coaches to find reps," Taylor said. "I think it's hard for those guys to figure out how they want to do it. For us, it's friendly competition. I know I'm the oldest of the group so I'm always trying to help those guys figure things out. If I'm here and I'm playing, great. If I'm not, then I know I left it better than I found it and those guys will be ready to roll."

Reed has been working with the first-team defense in practice recently and could get the nod again in the team's second preseason game against Minnesota on Sunday. He was the first off the bench when Seattle went to five defensive backs against the Denver Broncos on Thursday. He spent a chunk of last season on the team's practice squad before being promoted to the active roster late in the year.

"Just sitting out last year I was ready to hit somebody so it was exciting," said Reed, who did not dress for a game last season. "Your time is going to come so you've just got to ready when your number is called. Game day was fun finally getting a chance to strap it up again and hit someone on another team."