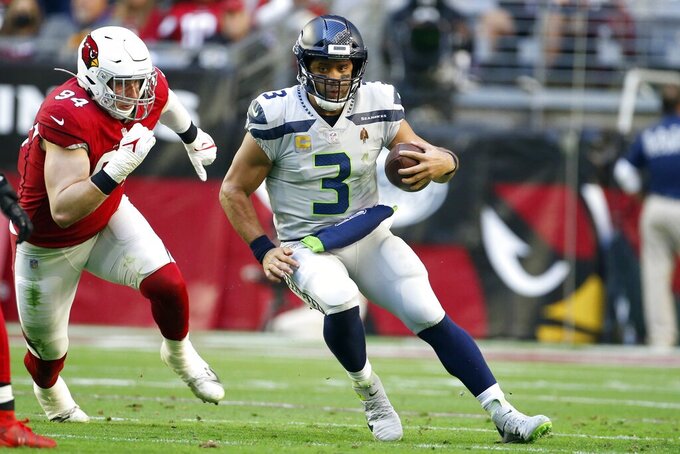 GLENDALE, Ariz. (AP) — Seattle's locker room was deafeningly loud in the aftermath of Sunday's impressive win, with the bass from some speakers rattling the concrete walls in the midst of constant cheers and laughter.

The Seahawks aren't going to the playoffs. They definitely still have their pride.

Russell Wilson threw three touchdown passes, Rashaad Penny ran for 190 yards and a touchdown, and the Seahawks spoiled a shot at the NFC West title for the Arizona Cardinals by beating them 38-30 on Sunday.

“I don’t think they're going to schedule a parade in Seattle,” Seahawks coach Pete Carroll said, grinning. “But right now, we don't really care about that. It was about putting it together, playing like we're capable, so that we can see the future.

“That was really, really fun.”

It was a back-and-forth game supplemented by a healthy dose of scoreboard watching. The Cardinals (11-6) were still in the running for the NFC West title with a win, especially since the 49ers beat the Rams.

In the end, the scoreboard's results were moot. The Cardinals couldn't take care of business against the Seahawks and will settle for the No. 5 seed after starting the season with a 7-0 record.

Arizona is 4-6 since that hot start, including losing four of its last five. The Cardinals will play at the Rams in the wild-card round.

Coach Kliff Kingsbury cited the usual reasons for the team's struggles during the late-season fade, especially a handful of ill-timed penalties. He also said there was no time to pout.

“Everybody is zero and zero and our guys understand that,” Kingsbury said. “We are disappointed today, but we got to get it out of our system quick and come back because anything can happen once you make the postseason.”

Seattle finishes 7-10 and won’t be in the postseason for just the second time in the past 10 years. Wilson, playing potentially his final game with the Seahawks, finished with 238 yards passing.

Seattle closed 4-2 record being eliminated from playoff contention for most of that stretch.

“Everybody was out there giving their all,” Tyler Lockett said.

The Cardinals trailed 17-10 at halftime but James Conner scored two touchdowns in the third quarter — one on a 20-yard pass from Murray and another on a 1-yard run. The second touchdown was set up by Jalen Thompson's interception that he returned to the Seahawks 1-yard line.

The Seahawks responded late in the third quarter when a wide-open Freddie Swain caught a 25-yard touchdown pass to tie it. The Cardinals went three-and-out on their ensuing drive and punter Andy Lee fumbled on fourth down, giving the Seahawks possession at the Arizona 10.

Seattle's Travis Homer caused the fumble, putting pressure on Lee, which caused him to drop the ball. Wilson scrambled for a 4-yard touchdown three plays later for a 31-24 lead.

Meanwhile, the scoreboard watching was equally as intense.

The Rams jumped to a 17-0 lead in the first half but the 49ers rallied to force overtime before winning. That game was tied at 17 right about the time Conner dived into the end zone for his 20-yard score that tied this game 17-17. Conner, the Pro Bowl selection who has scored 18 touchdowns this season, was back in the lineup after missing two games with a heel injury.

But the bad news started to pile up for the Cardinals in the final minutes. Not only did they lose, Conner took a hard hit to the ribs in the fourth quarter that knocked him out of the game.

The Cardinals' defense scored a touchdown on the second play of the game when Chandler Jones sacked Wilson and forced a fumble. Zach Allen picked it up and ran 16 yards for a 7-0 lead just 12 seconds in.

Jones' strip-sack of Wilson was no surprise considering the opponent. The 31-year-old edge rusher has played some of his best football against the Seahawks with 17 1/2 career sacks in 12 games.

Cardinals receiver A.J. Green caught his 700th career pass with a 6-yard catch in the first quarter. Green joins teammate DeAndre Hopkins, Antonio Brown and Julio Jones as the only active receivers with more than 700 career catches and 10,000 career yards.

Seahawks: Star LB Bobby Wagner (knee) was among five players on the inactive list. ... S Quandre Diggs was carted off the field in the fourth quarter with a leg injury. Carroll said the safety dislocated his ankle and broke a bone in his leg. Lockett — who described Diggs as his best friend — said he was staying in Phoenix on Sunday night to make sure Diggs had support.

Cardinals: Seven players were on the inactive list, including RB Chase Edmonds (ribs/toe), WR Rondale Moore (ankle), CB Marco Wilson (shoulder) and DL Jordan Phillips (knee). ... CB Kevin Peterson was evaluated for a concussion. ... RT Kelvin Beachum (back) left the game in the second half. ... RB Jonathan Ward (knee) also left in the fourth quarter. Eno Benjamin was the team's only healthy option at running back by the end of the game.

Seahawks: The season is over. Wilson's future with the franchise will be the offseason's big topic.

Cardinals: Time to prepare for the playoffs for the first time in six seasons. Arizona's not trending in the correct direction, losing four of its past five games as it heads to Los Angeles for the wild-card round.