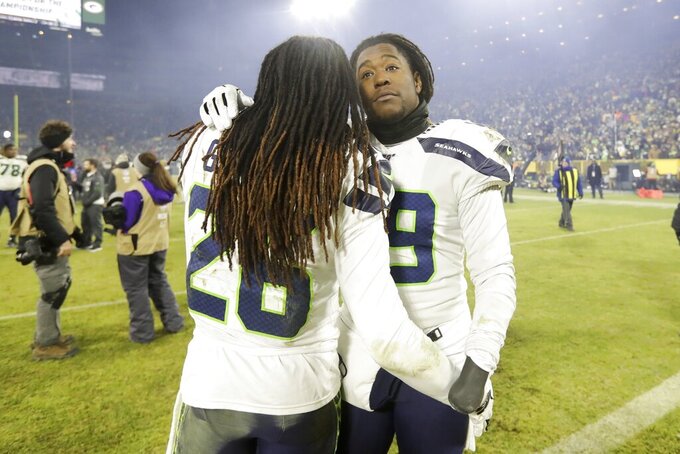 GREEN BAY, Wis. (AP) — The Seattle Seahawks were routinely Super Bowl contenders just a few years ago thanks in large part to their dominant defense.

That's no longer the case.

Seattle's defense bent and then broke Sunday, surrendering 344 total yards and committing costly penalties in a season-ending 28-23 loss to the Green Bay Packers in the NFC divisional round. It was yet another rough outing for a defensive unit that struggled to stop anyone all season.

“I would say, feel the loss,” linebacker Bobby Wagner said of his message to the younger players. “Feel what that feels like, and use that to motivate you in the offseason. Whether it’s your workouts, whether it's the offseason training, studying, things of that nature. Because if we use it how we're supposed to use it and we grow, next season should be a really good season. Kind of feels like 2012 again."

The pieces that led the Seahawks to back-to-back Super Bowl appearances in 2014 and 2015 are mostly gone. Wagner and K.J. Wright are both still here. But Richard Sherman is with the 49ers, Earl Thomas is a member of the Ravens and Kam Chancellor is retired. Malcolm Smith, who was the Super Bowl MVP for the Seahawks in 2014, and Michael Bennett are both in Dallas.

Wright sat at his locker, which was next to Wagner's, after the loss for several minutes with his head in his hands. The nine-year veteran, all with Seattle, had seven total tackles Sunday.

“Losing’s always hard,” he said. "Whenever the season ends you just know this is the last time these 53 guys will be together, and it always hard for me to just move on. The older I get, the more challenging it gets.”

Wagner's 137 postseason tackles are the most in the NFL since 2012. Wagner led the league with 159 tackles this regular season. But Wright, Wagner and the Seattle defense haven't been the same without a shutdown secondary.

Davante Adams did whatever he wanted Sunday, torching the Seattle defense for a franchise playoff-record 160 yards and two touchdowns on eight catches.

Aaron Jones added two scores, including one with Jadeveon Clowney on the sideline with an injury to his midsection. The Seahawks did manage two sacks on Aaron Rodgers, who passed Dan Marino for eighth on the all-time list of career postseason passing yards, but failed to force a single turnover and couldn't get off the field when it needed to.

The Packers' offense, which struggled to find consistency all season, was 9 of 14 on third down and 3 for 3 in the red zone.

“A-Rod did a good job of getting the ball out pretty fast," Wagner said of Rodgers. "It was hard for us to get to him. When we did get to him, he was finding a way to get out of the pocket and kind of extend the play. So we definitely felt that was a big part of the game.”

The Seahawks finished 2019 with the 26th-ranked defense in the NFL. Seattle had the 27th-ranked passing defense and was 22nd against the run.

Seattle has now lost nine straight at Lambeau Field and is 1-9 all-time in the Packers' home stadium.

By Tom Withers just now
By Tom Canavan 4 minutes ago
By The Associated Press 22 minutes ago
By Dennis Waszak Jr. an hour ago
By Arnie Stapleton 8 hrs ago