Seattle opts for experience over projects in draft class 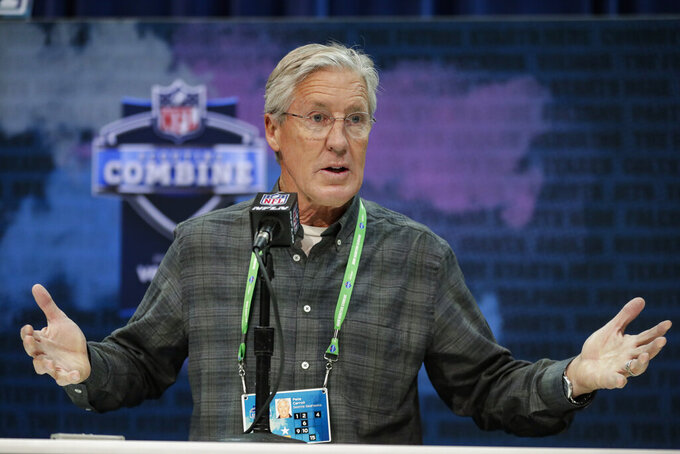 SEATTLE (AP) — The Seattle Seahawks were not in search of projects in this year's NFL draft. That might have to do with the changes to this offseason made necessary by the coronavirus pandemic.

Known for gambling on players with potential to develop, the Seahawks appeared to seek a bit more certainty this time around, focusing less on the quantity of selections and more on players who can be successful contributors without major makeovers.

They believe first-rounder Jordyn Brooks can contribute at linebacker right away. They think pass-rushder Darrell Taylor can address their biggest weakness from last season. They believe Damien Lewis is the right guard of the future and could start this year.

Even some of the five players taken in Saturday's later rounds have a chance to be contributors as rookies.

“Absolutely. I mean, not necessarily an emphasis from a conference standpoint, but an emphasis to try to find people that we’re going to be able to click with our coaches and vibe with our locker room and be able to do that in a very very quick manner,” Seattle general manager John Schneider said.

Seattle made eight selections, tied for the fewest by Schneider and coach Pete Carroll during their tenures. Getting to that number required a late trade, sending a 2021 sixth-round pick to Miami to move back into the seventh round.

All eight of Seattle’s picks came from Power Five programs, and none appears to be a major developmental project.

“We’re really in the mode of adaptation, through everything,” Carroll said. “Look at what we just did. Everything is kind of fluid, and on the move and you've got to be flexible.”

For all the success Seattle has enjoyed on the final day of the draft, the fourth round has brought some busts, particularly with wide receivers. This year, the Seahawks went with a tight end and a pass-catching running back in Round 4: Colby Parkinson of Stanford and DeeJay Dallas of Miami, respectively.

Parkinson may struggle as a blocker early in his career but at 6-foot-7 is a huge target for Russell Wilson. Parkinson had 48 catches last season and in 2018 had seven touchdowns on 29 catches.

Dallas may be the more intriguing option. He was recruited to Miami as a wide receiver before moving to running back and leading the Hurricanes in rushing last season. He’s also considered an exceptional pass blocker and would appear to be an ideal option for the Seahawks on third downs.

“My favorite part of third-down situations is protecting the quarterback,” Dallas said.

Syracuse defensive end Alton Robinson already has a feel for what Seattle expects from its pass rushers. Robinson did his pre-combine training in Bellevue, Washington, at the same gym where Bobby Wagner, K.J. Wright and several other players work out in the offseason.

One of the people Robinson got to know was former Seattle defensive end Cliff Avril.

Robinson also addressed his arrest in high school on a burglary charge that cost him a scholarship to Texas A&M.

“The situation, I’m sure you can find it, it was very embarrassing,” Robinson said. “I embarrassed myself, and my high school, my family and everything like that. I definitely learned from it.”

Seattle used its final two picks on pass catchers with unique traits. Florida wide receiver Freddie Swain's ability to make the roster may largely depend on how much he can help in the return game. Swain had 38 catches and seven touchdowns last season for the Gators, but averaged 10.2 yards per return on punts in 2018, including one touchdown.

The trade with Miami allowed the Seahawks to take another big target for Wilson, LSU's Stephen Sullivan. The 6-foot-5, 250-pounder played mostly wide receiver but moved to tight end for part of his senior season. Stephen would be the one project Seattle drafted with the uncertainty of how best to use him between tight end or wide receiver.

“This is one of my favorites because this is a guy that you to look at and really have to project what he's going to be like and we were willing to do that,” Carroll said.