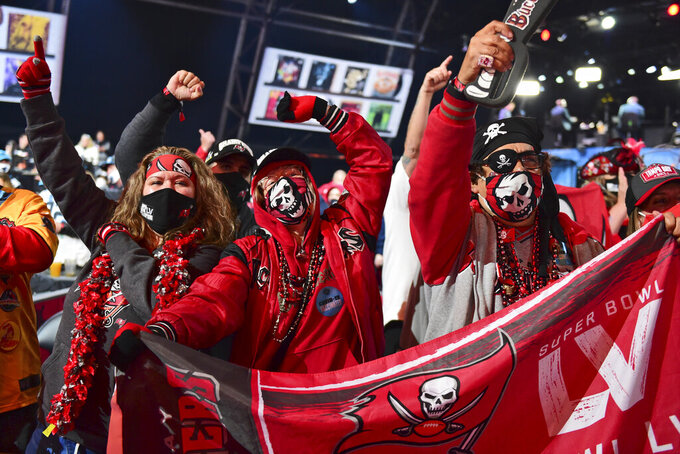 Not much changed on the second night of the NFL draft. Do the letters SEC and QB seem familiar?

The SEC remained the conference of choice with 29 players selected overall, including 17 on Friday night.

Quarterbacks went in clusters, too. Not like 1-2-3 as happened in the opening round with Clemson's Trevor Lawrence to Jacksonville, BYU's Zach Wilson to the New York Jets, and North Dakota State's Trey Lance to San Francisco.

Still, the second round concluded with Florida’s Kyle Trask going to Tampa Bay perhaps as the heir to Tom Brady in a decade or so. Then Texas A&M’s Kellen Mond was chosen in the second spot of the third round by Minnesota and Stanford’s Davis Mills went in the next slot to Houston.

“I’m definitely looking forward to it,” Trask said of Brady. “He’s definitely one of my favorite quarterbacks growing up. So to have that opportunity to learn from one of the greats is a great opportunity for me. I can’t wait to get this ball rolling for sure.”

Naturally, Alabama was a major destination within the Southeastern Conference. The national champions had a record-equaling six players taken in the opening round. Two more went among the first six picks of Round 2: offensive lineman Landon Dickerson and defensive tackle Christian Barmore, the MVP of the national title game in January on that side of the ball.

Georgia cornerback Tyson Campbell to Jacksonville and Mississippi wide receiver Elijah Moore to the Jets were the top two selections Friday night. Guess what conference they played in.

Campbell, a three-year starter, saw Bulldogs teammate Eric Stokes chosen in the first round by Green Bay. Campbell led Georgia with five pass breakups in 10 starts last season. He also had 29 tackles, including 2½ for loss, and an interception.

He has no qualms about switching to safety if asked.

“I’m versatile and I could learn a new position,” Campbell said. “I trust my feet, trust my hips. I feel like I can run with anybody.”

Moore's breakout season lifted him to All-America status — and now to a potential regular target for Wilson. The explosive Moore set a school record with 86 catches for 1,193 yards in 2020.

Not everyone went to SEC schools at the outset of the second round. North Carolina running back Javonte Williams is headed to Denver after the Broncos traded up to the third spot with Atlanta.

Miami went for safety Jevon Holland of Oregon. Then it was back to the SEC — and the Tide.

Dickerson can go at guard or center for Philadelphia, which desperately needs to revamp its O-line. He was injured for the national championship game, yet went onto the field for the final snap of Alabama's romp over Ohio State.

“You can call it leadership or however you want,” he said. “I care for every single guy I play with. I love being a part of a team, especially a football team. Everybody at this level has a mindset that not only do they want to be the best athlete, player they can be, but we also want to create the best team, a winning team.”

Barmore was the first player at his position taken this year, by the Patriots, who traded up with Cincinnati. Barmore, of course, played with New England's first-rounder, quarterback Mac Jones, at Tuscaloosa.

“It was my favorite team growing up,” said Barmore. “They’re winners. I love winners.”

The Bears, who made waves Thursday night when they traded up to get Ohio State quarterback Justin Fields, also moved up to seventh in the second round to get a protector: Oklahoma State tackle Teven Jenkins. That was the first player drafted from the Big 12, at 39th overall.

Another Big 12 guy, Trevon Moehrig of TCU, went 43rd overall to Las Vegas and was the first safety taken.

Such powerhouses as Auburn, Texas A&M, which finished fourth in the final AP poll, and Wisconsin did not have anyone selected through 64 picks. But A&M quarterback Kellen Mond went second in the third round to Minnesota.

“I think one of the biggest things I learned, whether you’re a starter or a backup or anybody, is to treat everything like a national championship or a Super Bowl rep,” Mond said. “So that’s the type of mindset that I have, whether it’s workouts or going into practice. Just wanting to do everything to the best of my ability and just be prefect, and just pretty much wanting to grasp all types of information ...”

Three teams made their initial picks in the second round — and they went consecutively. Seattle took wide receiver D’Wayne Eskridge of Western Michigan, the Rams grabbed Louisville wideout Tutu Atwell, and the Chiefs got Missouri linebacker Nick Bolton.

Houston was the final franchise to join the action, taking Mills 67th overall amid all the turmoil surrounding Deshaun Watson.