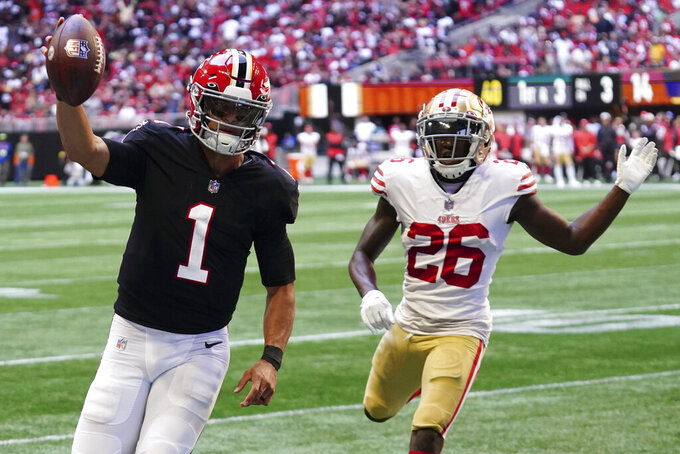 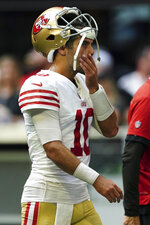 SANTA CLARA, Calif. (AP) — The second-half offensive woes that have plagued the San Francisco 49ers early this season proved costly when the banged-up defense couldn't bail them out.

The Niners came up empty on all five drives in the second half on Sunday, leading to a 28-14 loss to the Atlanta Falcons that leaves them at .500 six games into the season.

San Francisco (3-3) has scored six points after halftime in losses to Chicago, Denver and Atlanta.

“I’d say the most common thread, I think is when we struggle on third down,” coach Kyle Shanahan said Monday. "I feel we struggle to get points and I think that happened definitely in this game and that definitely happened versus Denver, so that could be some more common things. We’re moving the ball decent, but we’re not getting enough points and we have to finish out and capitalize on some of these opportunities and we have to start putting more points on the board.”

The issues on Sunday went from dropped passes, a lack of a running game to penalties and some struggles from Garoppolo.

On the opening drive of the third quarter, Ray-Ray McCloud dropped a deep shot from Garoppolo, turning a scoring opportunity into a three-and-out.

Tight end Charlie Woerner dropped a deep pass over the middle on the next drive to lead to another punt.

Garoppolo then threw an interception on the next drive and San Francisco came up empty on a perplexing, clock-eating drive of more than eight minutes in the fourth quarter with the Niners trailing by 14 points.

Pass rush. The Niners managed two more sacks despite Atlanta throwing just 14 passes, extending their streak with at least one sack to 36 games, including the playoffs. That's the longest active streak and fifth longest in the NFL since 2010. Drake Jackson and Charles Omenihu each had a sack to give the Niners four players with at least three on the season to go with Nick Bosa and Samsom Ebukam.

Third-down defense. The banged-up Niners defense that was missing seven starters for much of the game struggled to get off the field on third down. Atlanta converted nine of 14 tries (64.3%) for the second highest mark since Shanahan arrived in San Francisco in 2017. The Falcons needed an average of just 4.8 yards on third down, the seventh fewest against San Francisco in the past six seasons.

WR Brandon Aiyuk. After averaging 3.4 catches and 47.4 yards receiving in the first five games, Aiyuk had a very productive day. He caught eight passes for 83 yards and had the first two-TD catch game of his three-year career.

C Jake Brendel. The Niners center had three penalties on one drive in the fourth quarter with the most costly being a holding penalty that negated a 39-yard pass play to Aiyuk. With Daniel Brunskill back healthy, the Niners could consider making a change at center if Brendel's play doesn't pick up.

CB Charvarius Ward (groin) and RT Mike McGlinchey (calf) are day to day. ... S Talanoa Hufanga is in concussion protocol. He was cleared to return to the game, but had symptoms Monday and entered the protocol. ... LT Trent Williams (ankle) and DE Nick Bosa (groin) have a chance to return this week. ... DT Arik Armstead (foot) and Jimmie Ward (hand) are unlikely to be available Sunday.

0-26 — The Niners remained winless under Shanahan when trailing by more than four points after the end of the third quarter. The other teams without a win in that scenario since Shanahan arrived in San Francisco are Washington (0-38), Detroit (0-38) and Cleveland (0-34-1).

The 49ers host Kansas City in a rematch of the Super Bowl following the 2019 season that the Chiefs won 31-20.