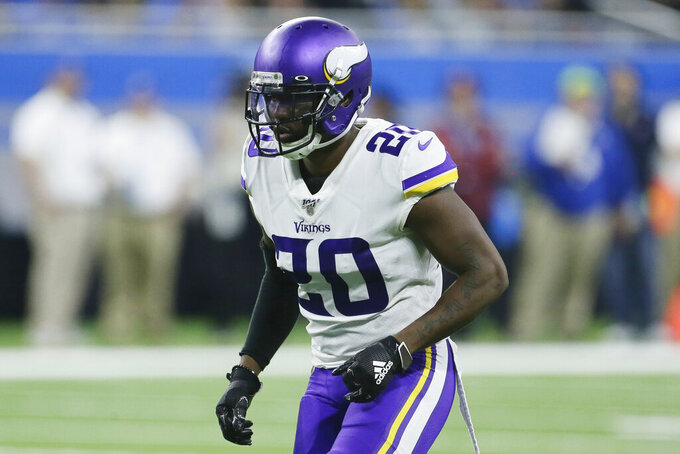 FILE - Minnesota Vikings cornerback Mackensie Alexander waits on the snap during the second half of an NFL football game against the Detroit Lions in Detroit, in this Sunday, Oct. 20, 2019, file photo. The Vikings have added more seasoning to their secondary by agreeing to contract terms with cornerback Mackensie Alexander and safety Xavier Woods. (AP Photo/Duane Burleson, File)

The Vikings finalized the deals on Monday, when Alexander quickly reacquainted himself with the team that drafted him in the second round in 2016 out of Clemson.

He left as a free agent last year for Cincinnati, where he started 10 games in the nickel role for the Bengals. He was eager to resume the tough-love direction from coach Mike Zimmer, who was as hard on Alexander as anyone he's had with the Vikings.

“I miss it, of course. It’s why I’m back. You want to be coached like that, somebody who’s going to stay on you," said Alexander, who was one of the few regulars who played in the last 2019 regular-season game that had no bearing on Minnesota's seeding for the playoffs. He injured his knee that day and missed the postseason.

“Like any other player you want to go out and compete. We're doing well, we’re heading to the playoffs, and you get injured. Things happen like that," Alexander said on a video conference call with reporters. "There’s not really much to say.”

The Vikings mostly used Jeff Gladney, one of their 2020 first-round draft picks, in the slot when they had five defensive backs on the field last season. By bringing in Alexander and eight-time Pro Bowl pick Patrick Peterson, the Vikings have lessened the pressure on Gladney and Cameron Dantzler, who showed signs of promise in their first year but were often overwhelmed as rookies.

Both Alexander and Woods, on separate media sessions, went out of their way to mention Zimmer, Peterson and safety Harrison Smith as their primary drivers for signing with the Vikings.

“We’ve got, in my opinion, two future Hall of Famers already in the secondary. Me being there is just a little bit of a bonus, but with those two guys it’s going to help out tremendously,” said Alexander, whose best season with Minnesota was in 2018 when he had 10 pass breakups, seven tackles for loss and four sacks.

While the lack of a pass rush was a glaring problem, the secondary was more vulnerable last year than ever since Zimmer was hired as head coach in 2014. The Vikings finished 2020 without a single cornerback who had played in more than 28 career games. The additions of Peterson and Alexander will make it tougher for Mike Hughes to stay on the team. Their 2018 first-round draft pick has been limited by injuries his entire time in the NFL, with neck trouble setting him back in each of the past two seasons.

Woods played his first four seasons for Dallas after being drafted in the sixth round in 2017 out of Louisiana Tech. In 2015, his college position coach was Karl Scott, who was hired by the Vikings this winter as their defensive backs coach. Woods became a full-time starter in his second year and has 18 passes defensed, five interceptions and three forced fumbles in his career. The Cowboys struggled in 2020 to defend the pass.

“I feel like I didn’t have a good season at all. Not to my standards. I’ve reviewed it and now know what I need to work on to not be in that situation again and play like that again,” Woods said.

He'll fill the spot vacated by Anthony Harris, who signed with Philadelphia. Smith, the five-time Pro Bowler, has manned the other safety spot for nine seasons.

“Just as much as I was preparing for Minnesota’s offense, I was watching Harrison,” Woods said, recalling his film review before the Cowboys-Vikings game last year. “That was one of the main reasons why I wanted to be here, to be able to learn from him."