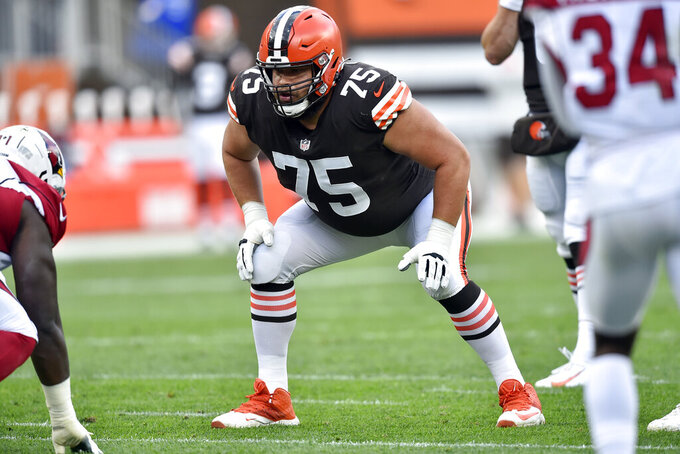 FILE - Cleveland Browns offensive guard Joel Bitonio (75) gets set at the line of scrimmage during an NFL football game against the Arizona Cardinals on Oct. 17, 2021, in Cleveland. The Browns made another huge investment into their offensive line, signing the three-time Pro Bowl left guard to a three-year, $48 million contract extension on Wednesday, Nov. 10, 2021. (AP Photo/David Richard, File)

CLEVELAND (AP) — Just before the Browns started practice Wednesday a Brink's truck pulled up to the front door of the team's facility.

Money has been flowing freely of late.

Bitonio's deal, which runs through the 2025 season, came one day after Cleveland signed right guard Wyatt Teller to a four-year, $56.8 million extension.

“They deserve that,” said quarterback Baker Mayfield. “They protect me. They protect all of our guys, they’re team-first guys.”

The timing of the cash pickup may have been a coincidence, but the Browns dropping $104 million on two athletic linemen is by design.

“They deserve every penny,” said linebacker Anthony Walker Jr., who faced Teller and Bitonio as an opponent with Indianapolis and is thankful to now be a teammate. “You see those guys dominate every week.”

The 30-year-old Bitonio was under contract through 2022 — he signed a six-year, $51 million deal in 2017 — but the Browns wanted to secure one of their leaders, best players and have him finish his career with Cleveland.

Bitonio was drafted by the Browns in the second round in 2014. As the team's longest-tenured player, he's endured it all — coaching and front-office changes, quarterback swaps and losing, including an 0-16 season in 2017.

Cleveland's become a second home for the California native and his family, and now that the Browns are a contender, he wants to stay.

“It’s pretty special,” he said of the possibility of playing his entire career with Cleveland. "You look around the league and there are great players who have played for three, four teams. It’s a tough business to stick with one team because you have so many different coaches and things that happen.

“It is truly an honor to hopefully finish my career here. I don’t know anything else. I do think we have something special building here.”

Bitonio said his agent approached the Browns about an extension this summer. He didn't want to know of the status during the season and was only told on Sunday night after Cleveland's big win in Cincinnati that a deal was close to being finalized.

Beyond being a solid all-around talent, Bitonio has been durable, not missing a single snap since the start of the 2017 season.

He helps anchor one of the NFL’s best offensive lines, which has been responsible for Cleveland having such a strong rushing game. In Teller and Bitonio, the Browns are able to run a variety of blocking schemes up front that makes them tougher to defend.

Bitonio said the team's commitment to he and Teller shows how the Browns want to play.

“It points to our identity," he said. “We want to be a team that wins in the trenches up front — both offensive line and defensive line.”

Bitonio did have one setback last season as he tested positive with COVID-19 and had to sit out the Browns' wild-card win at Pittsburgh.

But he's gotten better each year, and Browns general manager Andrew Berry went as far as predicting Bitonio would one day be enshrined in the Pro Football Hall of Fame.

“Joel Bitonio is everything you’d ever want in a football player,” Browns coach Kevin Stefanski said. “We always know exactly what we are going to get from Joel every rep, every practice, every game.”