'See ya next year' Burrow tweets after scary knee injury 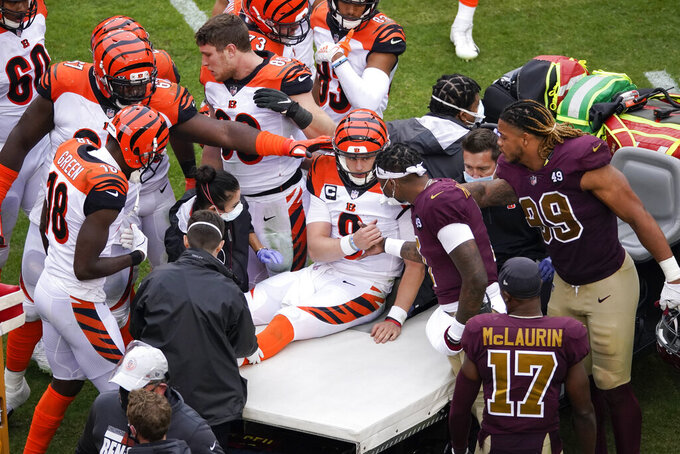 Cincinnati Bengals quarterback Joe Burrow (9) shakes hands with Washington Football Team quarterback Dwayne Haskins (7) as Burrows is carted away off the field during the second half of an NFL football game, Sunday, Nov. 22, 2020, in Landover. Burrows left the game with a left knee injury. (AP Photo/Al Drago)

Joe Burrow was looking forward to 2021 even as his rookie season was apparently ended by a scary knee injury.

“Thanks for all the love. Can’t get rid of me that easy. See ya next year,” the Cincinnati Bengals franchise quarterback tweeted after he was carted off the field early in the third quarter of a 20-9 loss at Washington on Sunday.

Burrow was hit high and low by Washington linemen Montez Sweat and Jonathan Allen after throwing a pass, and the QB’s left leg bent the wrong way. Burrow couldn’t put any weight on it as he was helped onto a cart.

“That’s an injury right there to a team leader that can take the wind out of your sails,” Bengals coach Zac Taylor said. “It’s not fun. He was making improvements every week, and we were getting the offense headed in a direction that we thought was exciting.”

In a season in which the Bengals wanted to get the 2019 Heisman Trophy winner and national champion as many snaps as possible, Burrow was 264 of 404 for 2,688 yards and 13 touchdowns in 10 games.

Burrow had been sacked 32 times this season, but this injury happened after he got rid of the ball.

“Seeing that sucks, especially when you know the person,” said Washington receiver Terry McLaurin, who played with Burrow at Ohio State before the QB transferred to LSU. “One thing I do know about Joe, he’s a resilient guy. I’m praying for him. He’s a guy that when he gets knocked down, he comes back stronger.”

— Patriots running back Rex Burkhead sustained a knee injury against the Texans and had to be helped off the field. He was later taken to the locker room on a cart. Texans receivers Kenny Stills (leg) and Randall Cobb (foot) were injured.

— Browns safety Ronnie Harrison, a major bright spot of late, injured his knee on Philadelphia’s first series and didn’t return. He is scheduled to have an MRI. Eagles defensive tackle Fletcher Cox left with an apparent leg injury and cornerback Cre’Von LeBlanc rolled his ankle.

— Titans linebacker Jayon Brown left with an elbow injury and left tackle Ty Sambrailo left during the pivotal touchdown drive against the Ravens.

— Tight end Zach Gentry of the unbeaten Steelers sustained a significant knee injury and cornerback Joe Haden suffered a minor knee injury in a win against Jacksonville. Jaguars defensive end Josh Allen injured his left knee, but should be fine. Cornerbacks Tre Herndon (knee) and Chris Claybrooks (groin), and safety Daniel Thomas (arm) left in the second half, and coach Doug Marrone said Thomas will go on injured reserve. Left guard Andrew Norwell (arm) was ruled out in the third.

— Falcons linebacker Mykal Walker limped off favoring his left hamstring in a loss against the Saints. Linebacker Foyesade Oluokun was treated on the field and walked to the sideline. Receiver Julio Jones saw limited action because of hamstring tightness. Saints left guard Andrus Peat left with a concussion and Deonte Harris left with a stinger.

— The Packers lost center Corey Linsley (back) in the first quarter of their overtime loss at Indianapolis.

— Cowboys cornerback Anthony Brown (ribs) left the game in the fourth quarter of a victory against the Vikings.

— Broncos safety Trey Marshall injured a lower leg in a win against Miami. The Dolphins didn’t announce an injury to Tue Tagovailoa before game’s end, but the rookie walked gingerly to the sideline after being sacked for the sixth time. Ryan Fitzpatrick closed the game for the Dolphins.