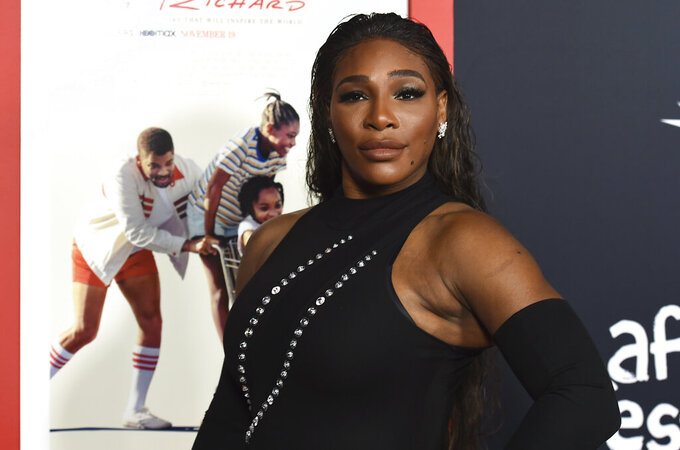 FILE - Executive producer Serena Williams arrives at the premiere of "King Richard" during the American Film Fest at the TCL Chinese Theatre on Sunday, Nov. 14, 2021, in Los Angeles. Williams is normally the one participating in a major championship matchup, but the six-time Wimbledon winner is looking forward to watching the Super Bowl along with her commercial. The tennis superstar stars in a Michelob ULTRA commercial along with several other athletes such as Peyton Manning, Jimmy Butler and Nneka Ogwumike for a competitive game of bowling. (Photo by Jordan Strauss/Invision/AP, File)

LOS ANGELES (AP) — Serena Williams is normally the one participating in a major championship matchup, but the seven-time Wimbledon winner will look forward to watching the Super Bowl along with her commercial.

“It’s always good to see other athletes just go out and do their thing on such a big stage,” she said in a recent interview. “I’ve been on the big stage so many times, it’s so cool to experience other athletes being on that stage.”

Along with watching the Bengals-Rams game, Williams will be on the lookout for her Super Bowl ad. The tennis great stars in a Michelob ULTRA commercial along with several other superstar athletes such as Peyton Manning, Jimmy Butler and Nneka Ogwumike for a competitive game of bowling.

Williams’ commercial is part of Michelob’s three-ad series. She wants it to express the meaning of joy.

“It’s critical for us to continue to have that,” said Williams, who starred in a Bumble commercial in 2019 and last year’s Michelob ULTRA ad, which preached joy.

“I believe a big factor in success is joy,” she continued. “I go back and look at the tournaments that I’ve invested — like the ones I’ve never lost a set in – I was so joyful.”

Williams, who is a Compton, California, native, said the Super Bowl will help the growth of Inglewood, where Sunday's game will be played.

“It’s so big for the community,” she said. “With the L.A. Rams in it, it’s just like ‘How does this happen?’ It’s going to be an intense game. I think it’s going to be one that will go down in history.”