Several Steelers hurt in loss to Browns before brawl 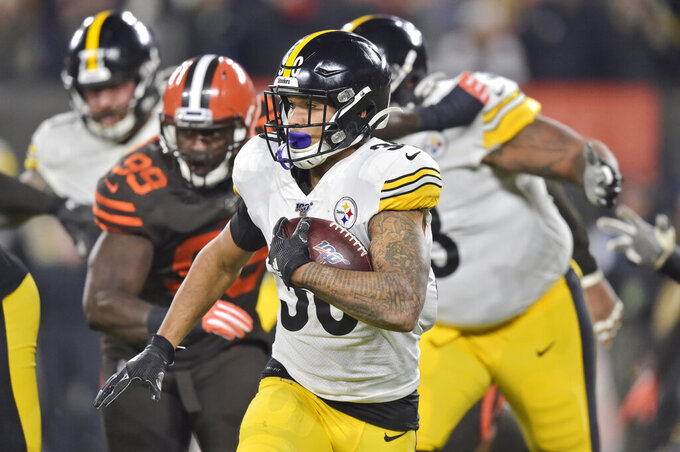 Pittsburgh Steelers running back James Conner (30) rushes against the Cleveland Browns during the first half of an NFL football game Thursday, Nov. 14, 2019, in Cleveland. (AP Photo/David Richard)

CLEVELAND (AP) — Before the ugly brawl, several Steelers took a pounding Thursday night against the Browns.

Smith-Schuster got drilled from the side by Browns cornerback Greedy Williams in the second quarter after attempting to catch a pass over the middle from Rudolph. Smith-Schuster was hit by Williams and sandwiched by two other defenders.

Smith-Schuster stayed down on the field for several moments — and several Cleveland players knelt near him — while he was examined by Pittsburgh’s medical staff. He got up and walked directly to the Steelers’ locker room for evaluation and treatment.

Several minutes later, the Steelers announced he would not return and has entered league protocol for head injuries.

Conner left in the second quarter after re-injuring his shoulder. He missed Pittsburgh’s past two games with the injury and was wearing extra-large shoulder pads for added protection.

Conner had 10 yards on five carries and one catch for six yards before getting hurt.

He leads the Steelers with 380 yards rushing and six total TDs. He and Smith-Schuster have become Pittsburgh’s top playmakers following the departures of star running back Le’Veon Bell and receiver Antonio Brown.

Following the game, Steelers coach Mike Tomlin offered no updates on the injuries as everyone was focused on the ugly incident with eight seconds left.

Despite the injuries, the Steelers were still within a touchdown in the fourth quarter before Rudolph threw one of his four interceptions and the Browns scored with 5:25 left.

The 22-year-old Smith-Schuster came in with a team-leading 36 receptions for 503 yards and three touchdowns.

In the third quarter, Johnson got rocked on a vicious hit by Browns safety Damarious Randall.

Johnson just missed catching a long pass down the sideline and never saw Randall, who lowered his head and delivered a late blow to Johnson’s head in front of Pittsburgh’s bench. Randall was ejected for unnecessary roughness.

Smith-Schuster is the youngest player in NFL history to reach 200 career receptions. He made his first Pro Bowl last season, when he caught 111 passes for 1,426 yards and seven TDs.