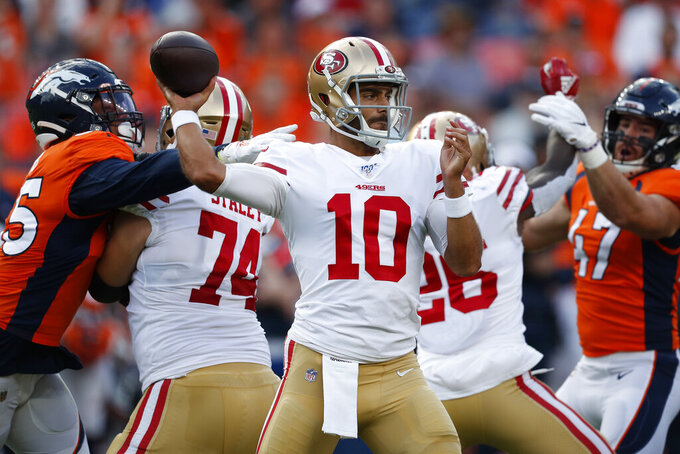 SANTA CLARA, Calif. (AP) — Quarterback Jimmy Garoppolo's return to game action for the San Francisco 49ers might have been a flop. But three rough series in an exhibition game aren't enough to cause concern for coach Kyle Shanahan.

Garoppolo completed just one of six passes for zero yards and threw an interception in the game at Denver on Monday night, his first action since suffering a season-ending injury to his left knee in September.

"To get concerned over 10 plays or however many it was, that's pretty irresponsible," Shanahan said Tuesday. "You try to evaluate those 10 plays."

Garoppolo's first pass was knocked down by defensive lineman Shelby Harris and his second one was intercepted by cornerback Isaac Yiadom when he was pressured by Bradley Chubb after a miscommunication by the offensive line.

"He got rid of it too early to avoid the hit and the route hadn't developed yet, so it didn't go far enough down the field," Shanahan said. "We need to do a better job in protection there by getting everyone on the same page and we need to do better at throwing that ball away, or if you can't, you have to take that sack."

Garoppolo didn't fare much better on the second series when his first pass was tipped again at the line. Cornerback De'Vante Bausby then broke up a third-down pass that was nearly an interception return for a touchdown.

Chris Harris Jr. pressured Garoppolo into an incompletion from his end zone on his first pass of the third series before Garoppolo finally completed a screen pass to running back Matt Breida, who was corralled for no gain on the final pass of Garoppolo's night.

That all came following a rough patch in practice that included interceptions on five straight passes in team drills during a session last Wednesday.

"We're around these guys a lot, so it's not like, it doesn't take a brain surgeon to realize that stuff is hard on people. I don't ever sense it from Jimmy," Shanahan said. "Jimmy comes in and he's the same guy every day. He's great in the meetings, he works, he listens. That doesn't change much. I know anytime that you get all that publicity for things that you're not happy with, that's going to affect a lot of people. You've got to go out there and play and you get your confidence back by playing. There's not a magical motivational speech or anything. Jimmy's got the ability to do it. We know he will do it."

The 49ers are counting on a healthy and effective Garoppolo this season after winning just 10 games in the first two years under Shanahan. Garoppolo showed plenty of promise after arriving in San Francisco in a trade with the Patriots midway through the 2017 season. He stepped in after a few weeks and won all five starts, earning a five-year, $137.5 million contract to stay off the free-agent market.

Garoppolo completed less than 60% of his passes in his three starts last season before getting hurt. His yards per attempt dropped, while his sack and interception rates went up.

Now he's trying to prove he can get back to the level he was at near the end of 2017, even if his first try came up short.

"What stinks is when you go out there and you just get a few opportunities and it doesn't go right and you're not in a position to play yourself out of it," Shanahan said. "Hopefully, he'll get to be in there longer versus Kansas City. I hope it's all good things, but most likely there will be some good, some bad and then we'll see how long he can stay in and grow from it."

NOTES: RB Jerick McKinnon (knee) is not expected to practice this week with only two sessions before Saturday's game but could be back on the field next week. ... C Weston Richburg (knee) could come off the PUP list next week and return to practice in time to play the season opener. ... G Mike Person (foot) is day to day. ... DE Dee Ford (knee) could return to practice this week. ... WR Shawn Poindexter injured his knee Monday and the Niners fear he tore his ACL. If that's the case, they plan to re-sign WR Chris Thompson, who was cut earlier this month.