Shanahan wants 49ers teammates to have QB Trey Lance's back 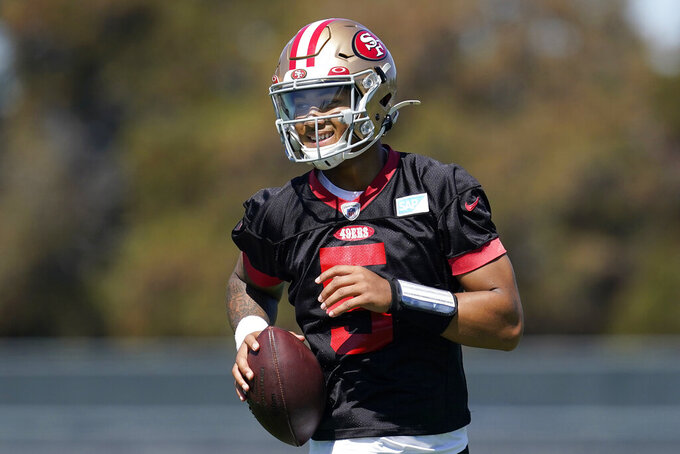 FILE - San Francisco 49ers quarterback Trey Lance takes part in drills at the NFL football team's practice facility in Santa Clara, Calif., Thursday, Sept. 1, 2022. Lance is ready for his first full season as starting quarterback for the San Francisco 49ers despite getting almost no game action the past two seasons and with former starter Jimmy Garoppolo back on the bench behind him. (AP Photo/Jeff Chiu, File)

SANTA CLARA, Calif. (AP) — Kyle Shanahan knows what the talk will be around the San Francisco 49ers if quarterback Trey Lance struggles in his first season as the starter with Jimmy Garoppolo waiting on the bench.

There will be calls from some fans for a change back to the QB who helped the Niners reach the NFC title game and Super Bowl in his two healthy seasons as a starter, and questions from the media about whether Lance is ready for the job.

“We all know how it’ll go,” Shanahan said Wednesday. “I also know if Jimmy wasn’t here and Trey did bad, how it would go. So we understand that. The fact that he has this successful quarterback behind him, that’s obvious how that narrative will be and understandably so.”

That outside pressure had no impact on the Niners' decision last week to bring Garoppolo back on a reduced contract as the backup.

But the coach still felt it was important enough before the news became public to gather a group of about 15 team leaders to explain the club's thinking in making the move. His message to the players was to make sure they support Lance through any rough patches.

“I think our players also know Jimmy went through some tough times, too, and they had his back,” Shanahan said. “Regardless of if they thought there was a better option, they had his back and people have to realize that. Players, I think need to realize that just like their position, it happens at the quarterback position, too. You’re not going to be perfect. ... You have to realize when you do struggle, those guys know it’s a lot harder to play well when no one has your back. You have to help guys through that. I think we got the guys who can do that.”

The Niners are going full speed ahead with Lance as the starter beginning with Sunday's opener at Chicago. This is the first time since 2019 that Lance will begin a season as a starter; his 2020 season at North Dakota State was wiped out by the pandemic and then his rookie year in the NFL was spent backing up Garoppolo.

Lance started two games last season when Garoppolo was hurt but has spent the entire lead-up to this season as the starter and is looking forward to a real game instead of practices and exhibitions.

“Kind of a breath of fresh air, for sure,” he said. “I’m excited to game plan for somebody, not just kind of running our training camp scripts and going against our defense. Get to kind of put plays in for certain situations and different things like that. So, it’s been an awesome experience.”

Lance was not picked as one of the 49ers' six captains for the season, with the players voting for Trent Williams, George Kittle, Nick Bosa, Arik Armstead, Fred Warner and Jimmie Ward.

Shanahan said Lance was seventh and Deebo Samuel was eighth in the voting but he wanted to limit the number of captains to six and said it wasn't unusual for a first-year starter not to get the honor.

Lance hopes to get to that point soon in his career but said it won't change how he approaches his job as a leader.

NOTES: Kittle missed practice after injuring his groin in practice Monday and his status for this week is uncertain. ... OL Daniel Brunskill (hamstring) also sat out. ... LB Dre Greenlaw (elbow) was limited.