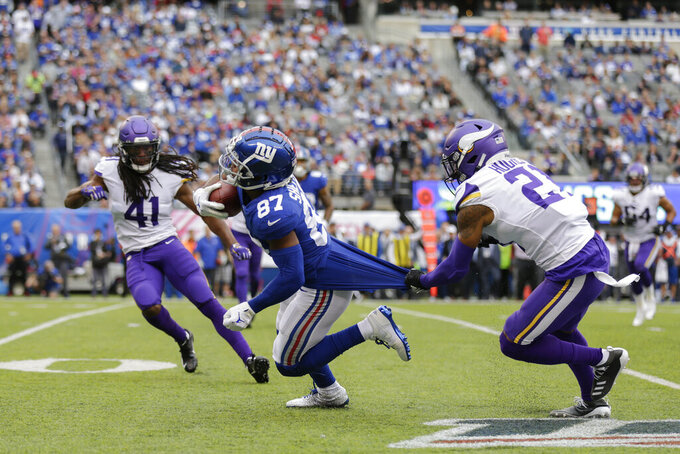 EAST RUTHERFORD, N.J. (AP) — The New York Giants are probably going to be without wide receiver Sterling Shepard for their Thursday night game against the New England Patriots.

Giants coach Pat Shurmur said Monday that Shepard is back in the concussion protocol for the second time this season after being hurt in Sunday's 28-10 loss to the Minnesota Vikings. Tight end and leading receiver Evan Engram (knee) and running back Wayne Gallman (concussion) also did not practice Monday.

The officials made Shepard leave Sunday's game late in the third quarter after he hit the ground hard trying to catch a long pass from Daniel Jones. He was evaluated for a concussion and returned.

Shurmur said Shepard showed up with symptoms of a concussion on Monday.

"He's in the protocol and we'll try to get him back," Shurmur said of Shepard, who also had a concussion in the season opener against Dallas and missed the next game against Buffalo. "He'll be back on the field when they say it's time."

Veteran Golden Tate, who was suspended for the first four games for using performance-enhancers, returned this past week. Rookie Darius Slayton also has played well and the roster includes veterans Cody Latimer and Cody Core.

The injuries have become a concern for the Giants (2-3).

Star running back Saquon Barkley has missed the past two games with a high sprain to his right ankle. Shurmur said the 2018 NFL Offensive Rookie of the Year was limited at practice Monday and is feeling better than last week. He gave no indication whether he will be ready for the Patriots (5-0).

If he cannot go, the Giants have only two other running backs on the roster, rookie Jon Hilliman and Eli Penny, who is more of a fullback.

Shurmur said there is a chance the Giants would add another running back for the game.

Linebacker Tae Davis, who missed the past two games with a concussion, practiced without restrictions Monday.