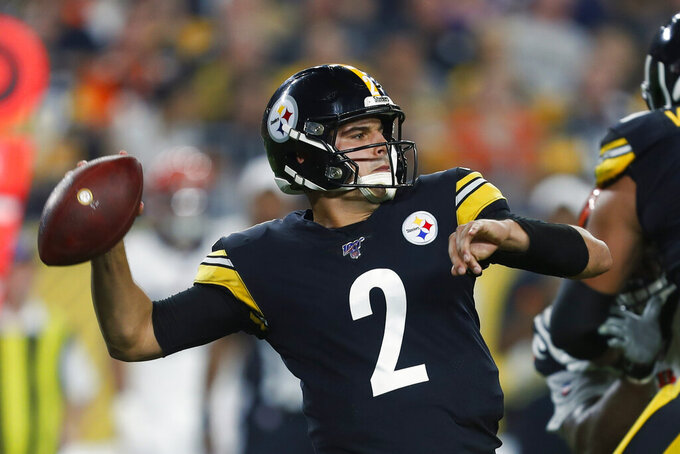 Pittsburgh Steelers quarterback Mason Rudolph (2) passes during the first half of an NFL football game against the Cincinnati Bengals in Pittsburgh, Monday, Sept. 30, 2019. (AP Photo/Tom Puskar)

PITTSBURGH (AP) — Mason Rudolph splattered his name all over the Oklahoma State record book by cocking his right arm back and seeing just how far he could let it fly. It led to lots of wins and lots of yards and, somehow, a fair amount of complaints.

“I mean, I love throwing the ball deep,” the Pittsburgh Steelers quarterback said Thursday. “I was criticized often for doing that too much in college.”

Two weeks into his career as an NFL starter, Rudolph appears to have the opposite problem.

The player given carte blanche to sling it where he wanted whenever he wanted for Oklahoma State is trying to take a more disciplined approach as a pro. He completed 24 of 28 passes for 229 yards and two touchdowns while picking up his first win as a starter against Cincinnati on Monday, the majority of his connections coming on check-downs to running backs Jaylen Samuels and James Conner.

It was efficient. It was effective. And well, it was kind of boring. It’s an issue Rudolph is more than happy to live with if the Steelers (1-3) can keep it going on Sunday against Baltimore (2-2).

“You guys can say we're not throwing it deep all you want but sometimes that's football,” Rudolph said.

More than half of Rudolph’s 24 completions against the Bengals went to Conner, Samuels or tight end Nick Vannett. With Cincinnati determined to prevent the big play, Rudolph looked underneath. He didn’t turn the ball over, something he’s done a solid job of avoiding since taking over for Ben Roethlisberger in the second half of a Week 2 loss to Seattle. He’s thrown two picks across 10 quarters, one of them coming on pass that hit Donte Moncrief’s facemask before fluttering into harm’s way.

Rudolph would love to take a shot. And he’s quick to point out he hit Diontae Johnson for a 39-yard touchdown against San Francisco and found him again for a 43-yard score against the Bengals. Yet he’s also not going to look deep just to do it. He’s learned quickly that the talent gap between Oklahoma State and most of its opponents doesn’t exist in the NFL. Better to make a quick read, throw it and move on to the next snap instead of hunting home runs all the time.

“We want to get the ball out,” Rudolph said. “We've got an unbelievable offensive line from a protection and run game standpoint. But they appreciate getting the ball out quick and keeping defenses on their heels and not letting the rush not really get dialed up and get back to me. So that's a facet of the game and there's times you've got to play action and take them down the field and we did both.”

Besides, as offensive coordinator Randy Fichtner points out, there’s no law against having a receiver take an innocent hitch pattern or crossing route and turning it into something far more significant.

“We always talk about catch short, run long where you've got to break tackles and make guys miss,” Fichtner said. “That's the way this league is. If you're on the field you're a playmaker, and you've got to make plays.”

Or at least be a threat to make a play. It’s a role that JuJu Smith-Schuster has fulfilled for long stretches. No longer a well-kept secret and with Antonio Brown no longer on the roster, defenses are keying on taking Smith-Schuster away. He finished with just three receptions for 15 yards against the Bengals, but his presence drew a double team that freed up Johnson to get loose down the field in the third quarter against Cincinnati as the Steelers slowly pulled away.

“He attracts more attention and that's why the other guys have to be in position to make their plays,” Fichtner said. “Diontae has done a nice job the last couple of weeks.”

Pittsburgh, however, will need more volunteers. James Washington, Rudolph’s teammate at Oklahoma State, has largely disappeared since his good friend took over for Roethlisberger. Washington didn’t have a catch against the Bengals. Washington stressed the need to stay positive and Rudolph called it a “matter of time” before they get it going.

Until then, Rudolph will try to keep making progress on the intermediate routes critics said he couldn’t throw accurately during college because he was consumed with heaving it downfield. It’s something he’s been working on since his first rookie minicamp in the spring of 2018.

“It's a lot of fun when you've done that and they come up and they're more aggressive and you're able to take a shot,” he said.