Shurmur has tough choices to make with cuts next week 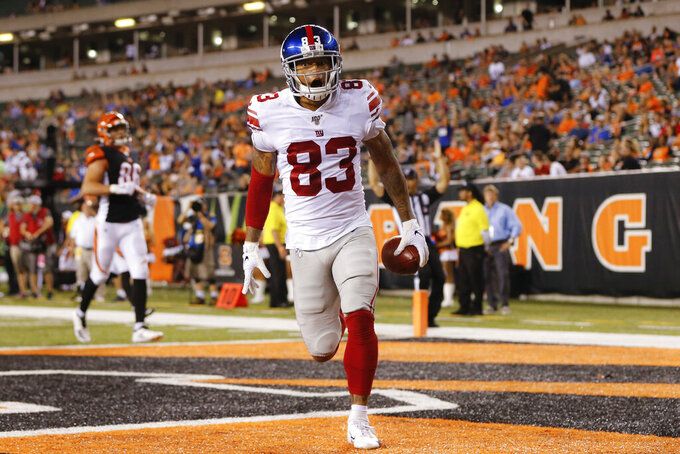 EAST RUTHERFORD, N.J. (AP) — Pat Shurmur had a relatively easy time making the final cuts in his first season as coach of the New York Giants.

Coming off a three-win season, the Giants didn't have a ton of talent on the roster heading into 2018. There were some very good players on the team, but the depth was lacking.

Of players released in the final cuts, only a couple made noteworthy contributions. Defensive lineman Romeo Okwara led the Detroit Lions with 7½ sacks, while safety Andrew Adams had four interceptions with the Tampa Bay Bucs.

Shurmur will be facing much tougher choices next weekend when the Giants (3-0) cut their roster to the mandatory 53-man limit. His roster is deeper and some positions, such as wide receiver, tight end and linebacker, will take some discussion.

Speaking on Friday after the Giants' 25-23 win over the Bengals, Shurmur said every coach wants competition.

"I sort of feel like this year we may end up cutting more guys that are going to be attractive to maybe another team, which tells me that our 90 is better, and also tells me the players are embracing what we are talking about," he said. "The goal is to either make our team or somebody else's."

The hardest decision for Shurmur and his staff may be at wide receiver, even with Golden Tate III out for the first four games for a violation of the rules on using performance enhancers.

Sterling Shepard, who broke a thumb on the first day of camp, is the No. 1 receiver despite not having played a preseason game. Veteran Bennie Fowler seems to be set at No. 2 with six catches for 54 yards and two touchdowns.

That's where the coaches will start looking at special teams. Russell Shepard is excellent in coverage. Golden returned a punt 68 yards for a touchdown against the Bengals and then lost the next one on a fumble. Latimer and Jones can return kickoffs.

It will be a tough decision.

Tight end is another spot with Evan Engram and Rhett Ellison topping the list. There is also holdover Scott Simonson and free agents Garrett Dickerson and CJ Conrad in the mix. That's five for probably three spots.

Shurmur also has to decide on a backup for Saquon Barkley at running back. Wayne Gallman is the likely choice with Paul Perkins, Rod Smith and free agent Jon Hilliman looking for spots.

The easiest choice for Shurmur may be at quarterback. Instead of keeping three as he did last year, he will probably keep Eli Manning and heir apparent and No. 6 overall draft pick Daniel Jones on the roster.

Jones seems ready to play despite three fumbles, including two lost. He has hit 25 of 30 for 369 yards and two touchdowns in the preseason. Manning is 9 of 13 for 86 yards and a touchdown, playing one series in each game.

Co-owner John Mara said last week that Manning is the starter and his hope is the 16-year veteran will play great and keep the job. Shurmur backed up his boss.

Shurmur said Friday nothing has changed because Jones has played so well in the preseason.

"I've said it all along, Eli's our starter and we're getting Daniel ready to play," said Shurmur, who went 5-11 last season. "I think he's done a good job in the preseason, as I've mentioned all along. He's getting better, and he's going to continue to do that so that at whatever time we need him to play, he'll be ready."

It should be interesting to see how it plays out and the depth makes the Giants a little more competitive.