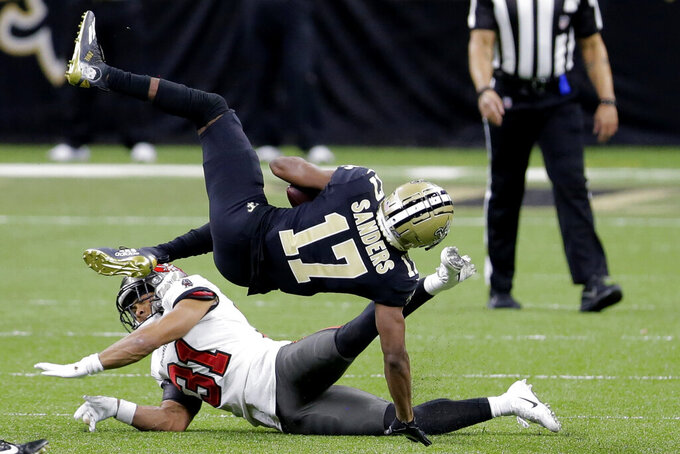 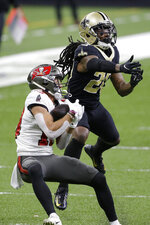 NEW ORLEANS (AP) — Signs point to new era dawning for the New Orleans Saints, even if an opportunity remains to keep together much of the young core that has powered the club to four straight NFC South titles.

The Saints must be ready for Drew Brees to retire after he started at quarterback for 15 years. They also must decide how to approach extension talks with prominent young players such as cornerback Marshon Lattimore, sack leader Trey Hendrickson and right tackle Ryan Ramczyk, among others.

The potential for greater-than-usual roster upheaval this offseason is why Sunday's 30-20 loss to Tampa Bay in the divisional round of the NFC playoffs was particularly disheartening for a number of Saints players.

They won their fourth consecutive NFC South title, only to come up short of a Super Bowl in a fourth straight postseason. When the previous three seasons ended, there was relative certainty about which front-line players were likely to be back. Now, much less so.

“Guys are aware of how contracts and everything like that works and who will be leaving and different things like that,” said defensive tackle Sheldon Rankins, a 2016 first-round draft choice who is scheduled to become a free agent this offseason.

“We definitely felt like this was a year, with the talent we have and the guys we could throw at people, that this was a year where we really got to capitalize and be able to make that run,” Rankins continued. "Obviously, we weren’t able to do it, came up short, but it’s definitely something that we thought about.”

Center Ryan McCoy said Monday that he hadn't watched video cut-ups of Sunday's game as he normally would have because he “couldn't stomach it.”

Still, Rankins sees a strong franchise culture built by coach Sean Payton, and a core of talented players who are relatively certain to be back — including running back Alvin Kamara, receiver Michael Thomas and linebacker Demario Davis — that could help the Saints sustain success going forward.

“The foundation they put in place is beautiful, something that anybody would want to be around,” Rankins said. “I think it bodes well going forward.”

CALLING IT A CAREER?

Brees, who turned 42 last Friday and is the NFL's all-time leader in yards passing, has not made his intentions known publicly. He declined even after Sunday's playoff loss to confirm recent widespread speculation about his plans to retire after this season. But Brees also has given no indication he's seriously considering playing next season either.

The past two seasons have been tough on him physically. He missed five games in 2019 with a throwing hand injury that required surgery. He missed four more this season with multiple fractured ribs and a collapsed lung.

Still, Brees was 9-3 as a starter while completing 70.5 percent of his passes for 2,942 yards and 24 TDs against six interceptions during the regular season. He also won a playoff game against Chicago before his worst game this season — marred by three interceptions and a career-playoff-low 134 yards passing — against the Buccaneers.

Rankins said the notion that Brees might be done in the NFL is “crazy to think about.”

“He’s been doing it at such a high level for so long,” Rankins said. "That hasn’t really sunk in with me just because I know he can still go out there and compete and be one of the best in the league.”

The Saints have been grooming Taysom Hill, who started four games this season while Brees was out, as the club's quarterback of the future. New Orleans also might try to lure Jameis Winston back for another season. Other options could present themselves if other teams choose to move on from prominent veterans with big contracts, similar to the way Indianapolis landed Philip Rivers in 2020.

The Saints have team options to keep Lattimore and Ramczyk, but going that route could create a salary cap hardship. It could benefit the Saints more to reach long-term extensions with both to spread out the 2021 cap hit over subsequent years.

Like Rankins, Saints 2020 sack leader Trey Hendrickson is due to become a free agent. After a relatively quiet first few years of his career since being drafted in 2017, he broke out in his fourth season with 13 1/2 sacks, which tied for second in the NFL. After a season such as that, he might command more of a price than the Saints are willing to pay.

Safety Marcus Williams and linebacker Alex Anzalone are other members of the Saints' 2017 draft class who also are scheduled to become free agents.

The Saints are expected to confront some salary cap challenges this offseason, which could mean either renegotiations or the outright release of some productive veterans.

Linebacker Kwon Alexander has a backloaded contract calling for about $25 million in base salary over the next two seasons. Tight end Jared Cook, defensive tackle Malcom Brown and offensive lineman Nick Easton are other veterans who could be cut if they don't renegotiate more cap-friendly deals.

The same could go for starting cornerback Janoris Jenkins and receiver Emmanuel Sanders, who each have one season remaining on their contracts.