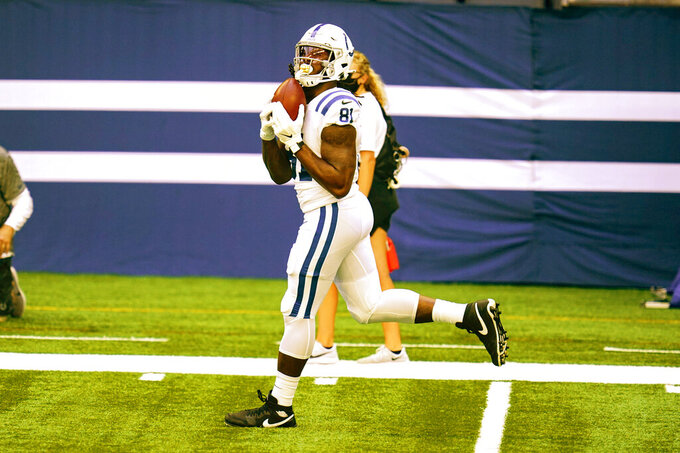 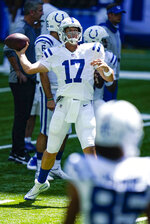 INDIANAPOLIS (AP) — The Indianapolis Colts used the first week of padded practices to get re-acclimated to contact.

They started the second week with a trip to Lucas Oil Stadium for a dress rehearsal for the Sept. 13 season opener at Jacksonville.

The Colts hit. They ran full speed. Occasionally, players wound up on the ground and some even waved to the empty seats as they jogged from the tunnel onto the field.

It was a simulated game at its finest.

“Definitely the most physical we've been the whole camp," Pro Bowl linebacker Darius Leonard said. “The intensity was high. It was something we needed. You don’t want the first game to be the first game you go live. With the great line we have and the great backs we have, it was amazing."

Coach Frank Reich scheduled this workout — and a second one Saturday — for several reasons.

He wanted to see how players reacted to their most intense practice yet and with no offseason workouts or preseason games to evaluate players, Monday's practice provided the next best thing.

Reich also needed the two-hour session on the one-year anniversary of Andrew Luck's surprise retirement to see if players were ready to play a full game in hot conditions. Plus, it gave players a sense of the silence they may encounter at NFL stadiums this season.

“We’ve got to bring our own energy and the last three years, the model has been wherever you're at bring the juice," Leonard said. “Today, there was no one out here, but I’m going to bring my contagious energy anyway. If a guy makes a play long as you’re celebrating, that’s how we continue to bring the juice — with or without fans."

Reich left nothing to chance with the game-like routine.

Players arrived more than two hours before practice, went through warm-up drills and headed to the locker room before returning to the field with their normal music blaring. Replays appeared on the stadium video boards, there was a halftime break and the first eight rows of the lower bowl were marked off — as they will be this season.

Reich even threw in some of the wrinkles the Colts have been working on.

Marlon Mack scored on a long run in the third quarter and rookie running back Jonathan Taylor, the first college player to rush for more than 6,000 yards in three seasons, got a hefty workload with both the starters and the backups.

And 38-year-old quarterback Philip Rivers finally made it onto his new home turf for the first time. The longtime Chargers star looked crisp, confident and in command as he took snaps from Ryan Kelly and hooked up with T.Y. Hilton for a touchdown in the back of the end zone.

Reich, who used a similar offense while working with Rivers in San Diego years ago, liked what he saw from the eight-time Pro Bowler who is attempting to rebound from one of the worst seasons of his career.

Of course, going live does come with a risk.

The Colts lost defensive end Ben Banogu about 50 minutes before the scheduled end of practice with an injured left ankle. Following practice, Reich said he spoke with Banogu and it didn't sound as if he would miss a significant amount of time.

Banogu is expected to be a key part of Indy's pass-rushing rotation.

Otherwise, there were few complaints.

“It was really helpful," Reich said. “I think everyone felt like this was a necessary step to be in this stadium and get ready for the season. Nobody wants to go to Jacksonville and not have been through a game-like scenario."

NOTES: Before practice, Indy announced it had activated tight end Andrew Vollert from the commissioner’s exempt list and put injured receiver Chad Williams on waivers. If Williams is not claimed, he will revert to the Colts' injured reserve list.