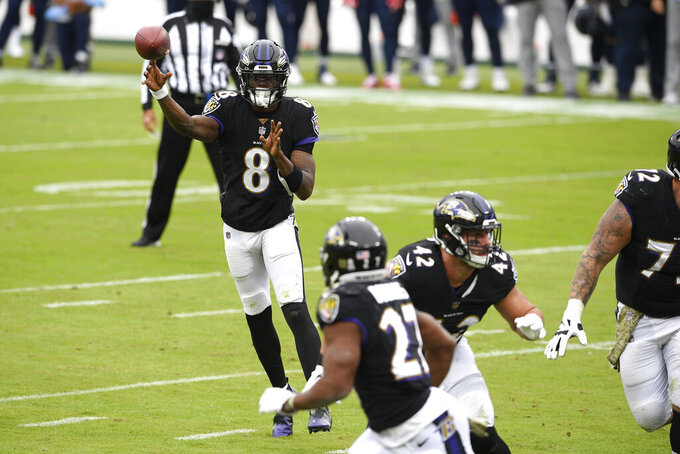 Baltimore Ravens quarterback Lamar Jackson (8) throws a pass to running back J.K. Dobbins (27) on a 2-point conversion play against the Tennessee Titans during the first half of an NFL football game, Sunday, Nov. 22, 2020, in Baltimore. (AP Photo/Nick Wass)

The Baltimore Ravens experienced another outbreak of COVID-19 on Monday, providing an additional burden for a team that's trending downward following a 5-1 start.

With Ingram and Dobbins out for Thursday night's game at Pittsburgh, seldom-used Justice Hill will join Gus Edwards in the Baltimore backfield. Dobbins ran for 70 yards and a touchdown on 15 carries and Ingram gained 2 yards on two attempts Sunday in a 30-24 overtime loss to Tennessee.

The Ravens reopened their training facility Monday afternoon after being closed earlier in the day. This is the second time the Ravens have been impacted by the coronavirus, though Harbaugh insisted that the players and the staff followed protocol before and during the game against the Titans.

“That's probably the thing that gives us a chance to play this game on Thursday night, guys doing a great job of that here in the building and at the game," Harbaugh said.

Cornerback Marlon Humphrey missed the Nov. 8 game against Indianapolis after a positive test, and several players spent that week on the reserve/COVID-19 list.

It's been a rough month for Baltimore (6-4). The Ravens launched November with a home loss against the Steelers, a game in which 2019 All-Pro left tackle Ronnie Stanley sustained a season-ending ankle injury.

Baltimore lost tight end Nick Boyle (knee) for the season in a defeat at New England, and defensive linemen Calais Campbell (calf) and Williams (ankle) were inactive against the Titans.

And so, a team that went 14-2 last season to earn the No. 1 seed in the AFC playoffs now sits in third place in the AFC North after losing three of four. The Ravens trail in the race for a wild-card spot and will need to finish strong to reach the postseason for a third successive year.

“You have to stack wins. Wins come in bunches. You’ve just got to get that one win," said defensive tackle Derek Wolfe, in his first season with Baltimore following an eight-year run with Denver. “You can’t get used to losing. That’s one thing: I know how that feels, and you can’t get used to it.”

The Ravens didn't want to play from behind against Tennessee, as they did in the playoffs last January in a 28-12 loss. They took care of business in that regard, taking a 21-10 lead in the third quarter.

They were outscored 20-3 the rest of the way.

“When we went up, I felt like we just took our foot off the gas," quarterback Lamar Jackson said.

Baltimore's defense crumbled in the fourth quarter and overtime, in part because the absence of Campbell and Williams created a lack of depth up front.

Derrick Henry rambled for 52 yards on seven carries in the fourth quarter and won it in overtime with a 29-yard touchdown run.

Dez Bryant caught four passes for 28 yards, including a 16-yarder on the fourth-quarter drive that produced a field goal to force overtime. Those were his first catches in an NFL game since Dec. 31, 2017, with Dallas.

Bryant adds another target for Jackson, who's had trouble recently connecting with second-year speedster Marquise Brown.

Brown was supposed to flourish this season after recovering from a foot injury that slowed him as a rookie. He got off to a decent start — as did the Ravens — but Brown has only six catches for 55 yards in his last four games and was held without a reception by Tennessee.

“We want him to be a huge part of the offense," Harbaugh said. “We've got to find ways to get that done."

Jackson said, “We just have to give him opportunities to catch the ball, give him little quick gains here and there. The defense is already playing back off of him.’”

Harbaugh said he's “sure hopeful" that Campbell can return from a two-week absence to face the Steelers, and offensive lineman Tyre Phillips (ankle) has been designated to return from injured reserve after missing three-plus games.

7 — That's how many yards Ingram has gained on the ground over the past two games after missing two games with an ankle injury. Ingram ran for 1,018 yards last year but has recently been overshadowed by Dobbins and Edwards.

The Ravens have little hope of catching the Steelers (10-0) in the AFC North, but a victory would be huge for Baltimore before heading into a season-ending, five-game stretch that includes four teams with losing records. The Ravens also have a rematch with the Browns, whom they beat 38-6 in September.