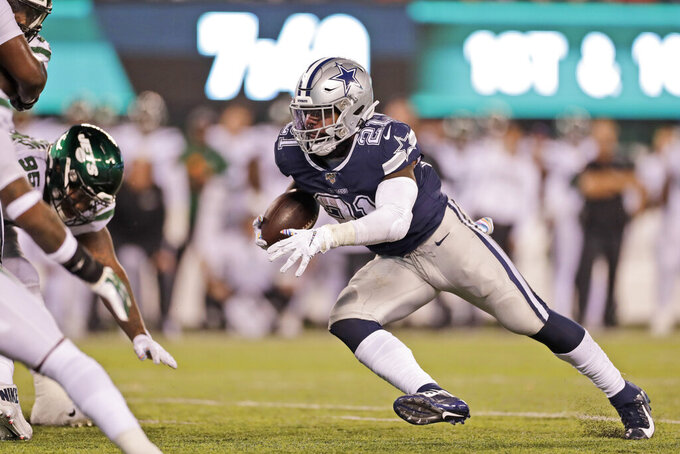 Dallas Cowboys' Ezekiel Elliott, right, runs the ball for a touchdown during the second half of an NFL football game against the New York Jets, Sunday, Oct. 13, 2019, in East Rutherford, N.J. (AP Photo/Adam Hunger) 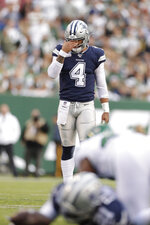 Since this skid came more than a month earlier on the schedule, the Cowboys have plenty of time to salvage their playoff hopes — something they couldn't do in 2017. The urgency is immediate, with a visit Sunday by Philadelphia and the NFC East rivals tied for the division lead at 3-3.

Still, the sense of crisis is considerably higher this time coming off a 24-22 loss to the previously winless New York Jets. It's not much consolation that Dallas was without both starting offensive tackles and slot receiver Randall Cobb from the start and lost No. 1 pass-catcher Amari Cooper to a thigh injury early.

An underachieving defense fell flat again, unable to stop the NFL's worst offense statistically on the way to a 21-3 deficit in the first half, or when it mattered most in the fourth quarter. Second-year New York quarterback Sam Darnold had one of his best games as a pro after missing a month with mono.

Super Bowl talk for a 3-0 team that already had high expectations has been replaced by Jason Garrett talk, as in what's the future of a coach whose contract expires after the season. Owner Jerry Jones brushed off those questions but couldn't hide a sobering thought.

"Ultimately if you're one of the really top teams, which we're not, we are not," said Jones, who watched one of his most difficult losses on his 77th birthday. "I hope that someday this season we could be one of the top teams. We're certainly not tonight."

Elliott had a big second half despite the Cowboys facing a large deficit for the second straight week. Dallas was down 31-3 in the second half against Green Bay, and Elliott all but disappeared.

This time the Cowboys stayed closer, and the two-time rushing champion had 70 yards rushing and 31 yards receiving after halftime. He had a punishing touchdown run and drew a pass interference penalty on a deep throw on the TD drive that gave the Cowboys a chance to tie in the final minute. Elliott finished with 152 scrimmage yards — 105 rushing and 47 receiving.

The secondary left receivers open all over the field in the first half against the Jets, highlighted by Chidobe Awuzie getting beat on a double move for Robby Anderson's 92-yard touchdown catch. Cornerbacks Byron Jones and Anthony Brown left the game with hamstring injuries.

Cornerback Jourdan Lewis might have earned more playing time with just the team's second interception of the season. It was the spark that got the Cowboys back in the game.

Garrett's decision-making. Going for it on fourth-and-2 inside the New York 10 when trailing 7-3 late in the first half wasn't the best move. It looked bad right away considering the Cowboys were without tackles Tyron Smith and La'el Collins and that Cooper had joined Cobb on the sideline. It looked worse later when the final margin was two points.

Jerry Jones said several times after the game he thought the Cowboys were in good shape in terms of injuries. He must be confident Smith and Collins will return against the Eagles after being game-time decisions, and that Cooper can recover quickly from a thigh injury and rejoin Cobb, assuming his back issue improves.

52-6 — That's the combined number of the largest deficits from the past two weeks. The Cowboys are forcing themselves to be nearly perfect in the second half to have a chance to win.

Just one really big one in the first of two meetings with the Eagles. The past two champions in the NFC East figured to fight it out again with the Giants and Redskins rebuilding. They probably thought the records would be better.