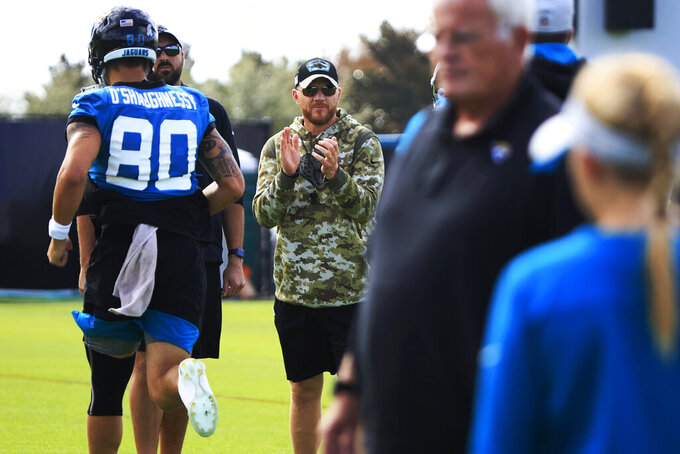 BETTING LINE: Jaguars by 5, according to FanDuel Sportsbook.

TURNOVER DIFFERENTIAL: Texans plus-1; Jaguars minus-19.

TEXANS PLAYER TO WATCH: Rookie QB Davis Mills threw for a career-high 331 yards last week. He completed his first 14 passes to set a franchise record and had Houston down only three at halftime. But he struggled in the second half and fell to 0-7 as a starter.

JAGUARS PLAYER TO WATCH: Maybe, just maybe, RB James Robinson will finally get a sizeable workload. Robinson has had 12 or fewer carries six times in the last seven weeks, a head-scratching decision even though he’s recovering from knee and heel injuries.

KEY MATCHUP: Jacksonville’s defense versus Houston’s Brandin Cooks, who has 27 receptions for 599 yards and three touchdowns in his career against the Jaguars. He’s also 5-0 in those games, getting victories with New Orleans, New England and the Texans.

KEY INJURIES: Texans RB Rex Burkhead will miss the game with a hip injury, but coach David Culley said he should return next week. ... Texans LB Kamu Grugier-Hill is questionable after being placed on the reserve-COVID-19 list Monday. He also has a knee injury that could keep him out even if he comes off that list. … The Jaguars get C Brandon Linder (back) after missing six of the last eight games. … LG Andrew Norwell (back) and RB Carlos Hyde (concussion) are unlikely to play.

SERIES NOTES: The Texans have won seven in a row and 13 of 15 in the series. One more victory would give them their longest winning streak against any opponent in franchise history. … The Jaguars have averaged 12.1 points during the seven-game skid against Houston and didn’t top 25 points.

STATS AND STUFF: Houston has lost three in a row and 11 of its last 12. ... The Texans threw a season-high 49 times last week. ... RB Royce Freeman had a career-high 51 yards rushing last week. ... RB David Johnson had a TD catch in the first meeting with the Jaguars this season. ... Cooks had eight catches for 101 yards last week for his third 100-yard game this season. He had a season-high 132 yards receiving in the first game against Jacksonville. ... Rookie WR Nico Collins had a career-high 69 yards receiving vs. Seattle. ... Rookie TE Brevin Jordan had a touchdown catch last week and has one in two of his last three games. ... DL Jonathan Greenard leads the team with a career-high eight sacks. … The Jaguars fired coach Urban Meyer on Thursday, hours after former kicker Josh Lambo accused Meyer of kicking him during a practice in August. The move also came after rookie QB Trevor Lawrence met with owner Shad Khan on his yacht and later told media members that the team needed less drama. Offensive coordinator Darrell Bevell will serve as interim coach for the final four games. ... Jacksonville has lost five in a row overall, the longest current skid in the league. The Jags also have dropped nine straight against AFC South opponents. … The loser will have the inside track to the No. 2 pick in the NFL draft in April and possibly the top spot if Detroit wins another game.

FANTASY TIP: Both defenses seem like safe plays. The Texans are averaging 9.0 points during their three-game skid. The Jaguars are averaging 9.1 points over their last seven games, with nearly half of their 64 points coming in the fourth quarter.