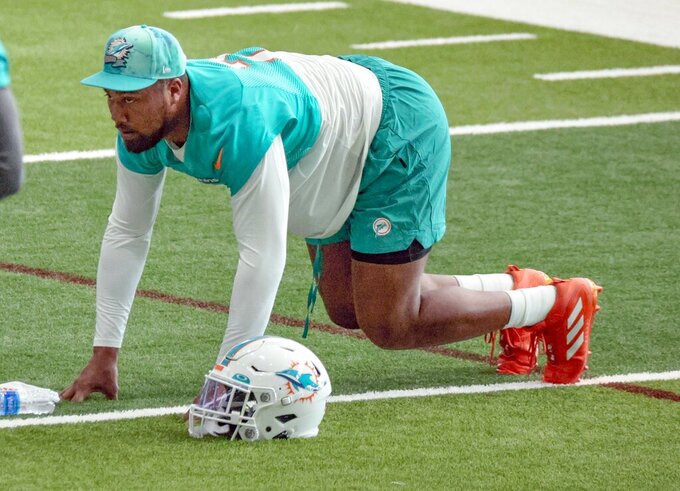 Yes, that is how fans, teammates and coaches will identify him on the field, but Chubb wants that number to symbolize a new outlook.

“And then when I started thinking about it, it’s part two of my life. My whole adult life I’ve been in Denver. It’s part two. It’s a new beginning. It’s a new everything."

Two days after acquiring Chubb in a trade that sent running back Chase Edmonds and a first-round pick to the Denver Broncos, the Dolphins signed their new linebacker to a five-year extension that could be worth as much as $119 million, a person with knowledge of the negotiations said.

Chubb’s deal includes about $63 million in guaranteed money, said the person, who spoke to The Associated Press on condition of anonymity Thursday because the terms had not been revealed publicly.

Among NFL edge rushers, Chubb trails only T.J. Watt of the Steelers and Joey Bosa of the Chargers in guaranteed money.

Chubb and former San Francisco 49ers running back Jeff Wilson Jr., whom the team also acquired via trade at the Tuesday deadline, will make their Dolphins debuts Sunday at the Chicago Bears.

“It’s just almost like riding a bike,” said Wilson, who is rejoining former 49ers running game coordinator and offensive coordinator Mike McDaniel, now the Dolphins head coach. “I’ve been doing this since Day 1. Same run styles, same passes, the same one-on-one matchups to get you in the open field.”

At 5-3, the Dolphins were a good team before adding Chubb.

Their offseason acquisition of Tyreek Hill, the NFL's receiving yards leader, is paying dividends, and quarterback Tua Tagovailoa has taken a huge leap as a passer.

Tagovailoa has the league’s best passer rating at 112.7 and has seemingly secured his place as Miami’s long-term answer at quarterback.

If that wasn’t clear before, it is now with Miami willing to give up a first-rounder in next year’s draft in the trade for Chubb.

Bringing in Chubb, the No. 5 overall pick in 2018 and a key piece of Denver’s stellar defense, sent another message: Miami wants to contend in the AFC.

“Throughout OTAs and throughout training camp, we could see the potential that we had as a team offensively and defensively,” Tagovailoa said, “and we’re not afraid to talk about Super Bowls here.”

Chubb, who is 26, has 5½ sacks this season and 26 in his career. He’s dealt with various injuries and missed most of last season following surgeries on both ankles to remove bone spurs. He also missed most of 2019 with a torn ACL, but went to the Pro Bowl in 2020.

“Listen, injuries happen,” said Dolphins general manager Chris Grier. “But we feel good that at his age and how he plays and the things we do that it was a risk worth taking.”

The combination of Chubb and second-year linebacker Jaelan Phillips, who has three sacks, is expected to help the Dolphins generate pressure without blitzing, which they have struggled to do. Miami has a 19.9 percent pressure rate on non-blitzes, which is 29th in the NFL, according to Next Gen Stats.

“My main thing is just trying to be the best me I can be, show these guys that I’m a hard worker,” Chubb said. “I’m going to try to do everything right, and whatever it takes for this team to win, two is going to be there to do it.”

Grier wasn't as blunt as Tagovailoa in expressing if the Dolphins expect to win a title with this roster, but the sentiment was the same.

“I think for us, it’s just doing a job,” Grier said. "I don’t think any of us, including myself, will be happy unless we ultimately win a Super Bowl, which is what every team is trying to do.”