Sky's not falling: Victory puts Cardinals back on track 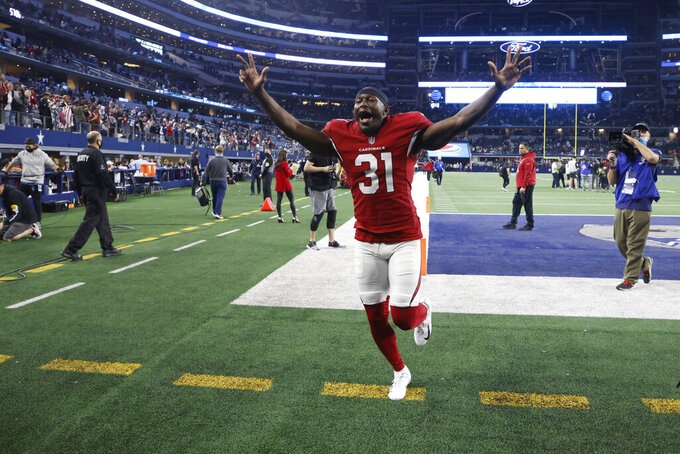 Kyler Murray insisted throughout the Arizona Cardinals' three-week swoon that the team was fine, the sky wasn't falling and the recipe for a turnaround was cleaning up simple mistakes.

The third-year quarterback pretty much nailed it.

The Cardinals bounced back from a month of mediocre football by earning a 25-22 road win over the Dallas Cowboys on Sunday. Both teams are bound for the playoffs in two weeks and could meet again in the NFC bracket depending on what happens during the final week of the regular season.

For the Cardinals, Sunday's win was a validation that they're still a formidable bunch when they play well.

“I think that was part of the process of getting back on track,” Murray said.

The Cardinals weren't perfect against the Cowboys but played a much cleaner game despite missing several key pieces because of injuries and COVID-19. Arizona built a 22-7 lead before hanging on in the final minutes.

“I think we kicked too many field goals, but when you don’t turn the ball over and you play clean, you give yourself a chance,” Murray said.

The Cardinals are still in the running for the NFC West title and a home playoff game. They'll need some help to push into the top spot: Arizona must beat Seattle in Week 18, while the Rams must lose to the 49ers.

Obviously, the Cardinals don't completely control their division destiny. But they can control how well they're playing, and an impressive win over the Cowboys was a good start.

“They’ve been resilient this entire time, no matter what’s been said, or thought, outside of our building,” coach Kliff Kingsbury said. "Those guys have worked their tails off and understand what we can be, and we’ve just got to keep fighting.”

It was a nice all-around performance by Arizona's defense, which held Dallas to just 301 total yards and 45 yards rushing. The Cardinals have had trouble against the run at times this season, but held up well against Ezekiel Elliott.

The running game just doesn't look the same without James Conner, who has missed the past two games with a heel injury. The Cardinals had to settle for some field goals against Dallas and Conner's powerful running style would have been useful in the red zone. Arizona hopes he'll be at full strength by the playoffs.

WR Antoine Wesley. Kingsbury gave Wesley his NFL opportunity and the undrafted receiver has made the most of the chance. Wesley — who also played for Kingsbury at Texas Tech — has scored his first three NFL touchdowns over the past two weeks, including two against the Cowboys. Wesley is no DeAndre Hopkins, but he's helped ease the pain of losing the three-time All-Pro to a knee injury.

“I was probably the only one in the building that knew he could," Kingsbury said. “I’m very familiar with him. I watched him in college. Nobody could cover him.”

OL Josh Jones has a lot of potential and held up pretty well at right tackle on Sunday after the Cardinals had to juggle their offensive line because starting left tackle D.J. Humphries missed the game on the COVID-19 list. The only major issue is that Jones has developed a nasty habit of false starts, picking up four over the past two games.

The Cardinals hope to get several key players back in the next few weeks, including Humphries (COVID-19), Conner (heel), WR Rondale Moore (ankle), CB Marco Wilson (shoulder) and DL Jordan Phillips (knee). They managed to beat the Cowboys without suffering too many more injuries.

It wouldn't be surprising if Arizona decides to sit some starters for the Seattle game in an effort to keep them healthy for the playoffs.

8 — The number of road wins for the Cardinals this season, which sets a franchise record. Arizona lost just once on the road this season — a surprising setback to the Lions — before bouncing back with Sunday's win over Dallas.

The Cardinals can still clinch the NFC West title if they can beat the Seahawks this Sunday and the Rams lose to the 49ers. Arizona got its desperately needed bounce-back win and wants to keep that momentum heading into the playoffs.