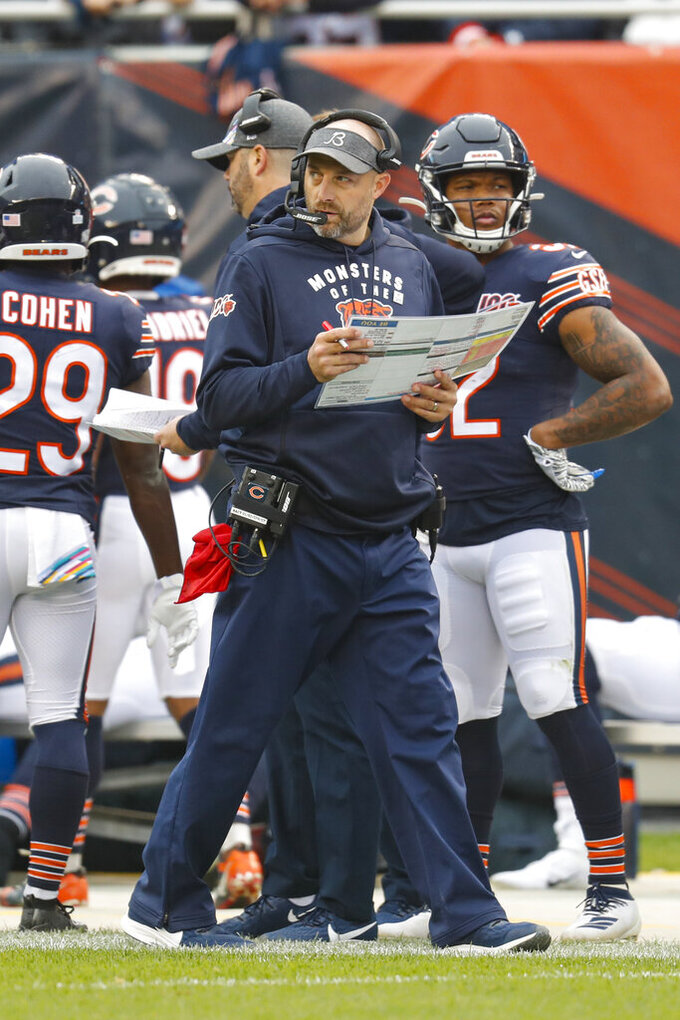 CHICAGO (AP) — Mitchell Trubisky made a couple of bad throws. Anthony Miller had a costly fumble. A blocked punt turned into a safety, and Chicago's defense looked tired in the second half.

At least the Bears were consistent. Each unit committed its share of mistakes.

Chicago flopped in its return from its bye week, looking overmatched in a 36-25 loss to Teddy Bridgewater and the New Orleans Saints on Sunday. Trubisky played for the first time in almost a month after being sidelined by a left shoulder injury, but the third-year quarterback turned in another shaky performance that invited more questions about his future with the team.

The Bears were held to a season-low 17 yards rushing on a franchise-low seven attempts. They scored their first offensive touchdown on Allen Robinson's 7-yard reception with 2:31 left, long after the outcome had been decided. The defense allowed a season-high 424 yards, including 151 on the ground.

"Run game, pass game, offense, defense, it's a trickle-down effect, and everything affects everything else," Trubisky said. "We're not helping out our defense by not staying on the field."

Coach Matt Nagy said he never thought about benching Trubisky, and he remains committed to the No. 2 overall pick in the 2017 draft.

Asked if he would consider having another coach call the offensive plays, Nagy said: "I'm not going to get into all that. If I did, I'm not going to — no one here will know."

Chicago (3-3) had talked tough after it lost 24-21 to Oakland in its previous game on Oct. 6 in London. The defending NFC North champions vowed to turn it around, but they kept going in the same direction against the Saints (6-1).

The trouble started almost immediately. After going three-and-out on the first possession of the game, Pat O'Donnell's punt was blocked by J.T. Gray. O'Donnell alertly knocked the ball out of the back of the end zone for the safety, eliminating the Saints' chance for an early touchdown.

After Miller fumbled on a rare carry for the wide receiver, Bridgewater threw a 7-yard touchdown pass to Josh Hill to make it 9-0 with 3:14 remaining in the first quarter.

Cordarrelle Patterson returned the ensuing kickoff 102 yards for a touchdown, giving the Bears a spark. They took their only lead of the day on Eddy Pineiro's 46-yard field goal with 11:33 left in the first half.

But New Orleans, playing without Drew Brees and leading rusher Alvin Kamara due to injuries, took over from there.

Bridgewater threw another TD pass, a 4-yarder to Taysom Hill, and Latavius Murray rushed for two scores as the Saints ripped off 27 straight points while the Bears offense stalled. Murray finished with 119 yards on 27 carries.

"On our side of the ball, that's just unacceptable," cornerback Prince Amukamara said. "The phrase that's been said is we all have got to look at ourselves in the mirror and I feel like we're losing our identity and we just have to get back to that."

Trubisky was 34 for 54 for 251 yards and two touchdowns, but he put up most of his numbers after New Orleans pulled away. Robinson finished with 10 catches for 87 yards.

"I mean, right now we have no identity," Trubisky said. "We're just searching. We don't have any rhythm. We're not the offense we were last year, and every year is different, every game is different. We've just got to find ways, look within ourselves, and we've got to have guys step up."