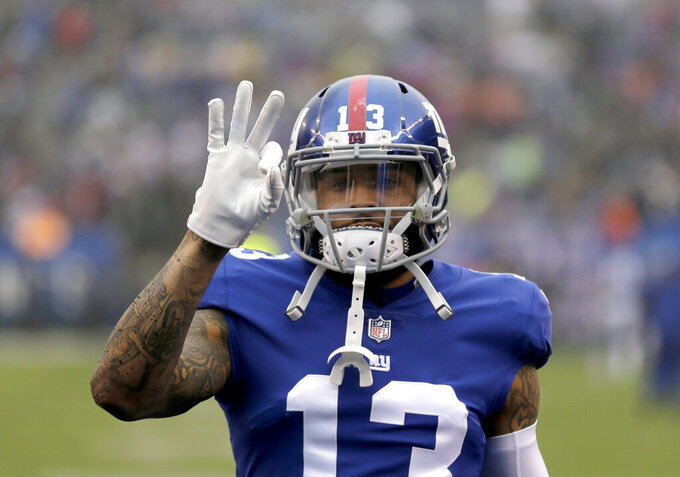 CLEVELAND (AP) — Fans are scrambling to get their hands on tickets, jerseys and make their first Odell Beckham Jr. sighting.

It's only mid-March and Cleveland's in a full-blown football frenzy. Expectations for the upcoming season, which were already enormous before the team traded for Beckham, have spun out of control.

Browns general John Dorsey's trying to rein them in.

"Expectations, I hear a lot about that, but I know this — good football teams, they win in the fall," Dorsey said Thursday, a day after the Browns officially landed Beckham in a franchise-changing trade from the New York Giants. "What we have done is we have added some talent. Now, the chemistry part has to take over with it.

"Teams win in the fall. They do not win in March, and that is good teams."

He's constructed a pretty good one as well — at least on paper.

Dorsey, who has transformed the Browns from winless to contenders in just more than a year, figured to make some moves during the offseason to upgrade his roster. However, when he recently said at the combine that he wasn't prepared to "go for it" it appeared he would wait until the draft to add talent.

That changed with his stunning acquisition of Beckham, one of the NFL's biggest stars, along with Pro Bowl edge rusher Olivier Vernon in a trade from New York as well as signing defensive tackle Sheldon Richardson to a three-year, $36 million free agent contract. Dorsey also made several other moves designed to plug holes.

As has been his way, Dorsey never tipped his hand.

"We lay out certain plans on the time," Dorsey said. "At the end of the day, we have been consistent in saying that we are going to try to create competition at as many positions as we can going into training camp. With the addition of certain players that we have acquired, I think we will be competitive and we will begin to try to be competitive in the AFC North."

The Browns haven't made the playoffs since 2002, when their division was created. For most of the past 20 years, they've been at the bottom, held down by powerful teams in Pittsburgh, Baltimore and Cincinnati.

But with the Steelers and Ravens reduced by offseason departures and Cincinnati starting over, the Browns have been ordained by some as the team to beat in the North.

Dorsey insists his flurry of major moves was not influenced by anything external.

"What we attempted to do here is add some good football players to the team, and then let's go compete and let's see how the group can come together as one and go and achieve the goals that they set for themselves and that the head coach sets for them," he said. "That was not the plan."

The euphoria surrounding the Browns has further convinced Dorsey that Freddie Kitchens is the right coach.

Kitchens' first job as a head coach — at any level — will require him to not only strategize and develop players but manage major personalities in Beckham, quarterback Baker Mayfield and receiver Jarvis Landry.

"Freddie is one of those individuals who I love because he is so straightforward and honest," Dorsey said. "He is direct. He is going to set expectations high. There is that accountability level. He will make players be accountable."

A three-time Pro Bowler and one of the game's most exciting players, Beckham comes to Cleveland with a sparkling resume tainted by some self-centered antics. He can be distracting and divisive.

After signing him to a five-year, $90 million contract in August, the Giants apparently grew tired of Beckham and traded him.

Dorsey is confident Beckham will be everything the Browns hope.

"I know Odell is very passionate, know he is competitive and I know he can help this football team," Dorsey said. "If you can get the chance to acquire a guy like that, you know what? Take a shot at him."

NOTES: Dorsey would not comment directly about interest in S Eric Berry, who was released by Kansas City earlier this week. "I have known Eric Berry for a long time," said Dorsey, who spent four seasons with the Chiefs. "He is a fine, fine person. Of course, we are going to do our research, and if we feel that he fits this organization, of course we will make some calls to his representatives."