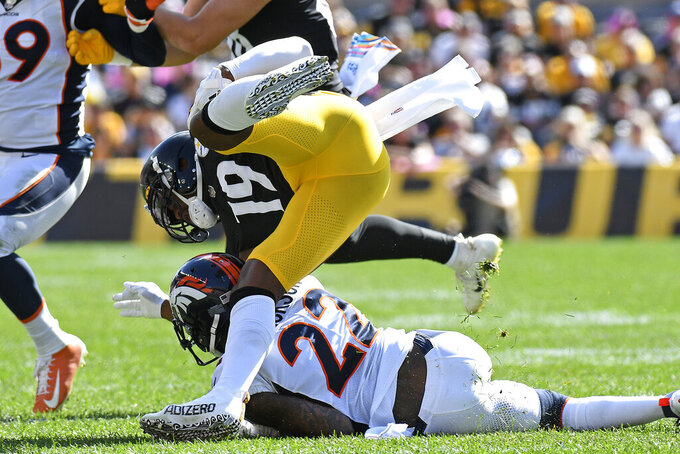 Pittsburgh Steelers wide receiver JuJu Smith-Schuster (19) is upended by Denver Broncos safety Kareem Jackson (22) during the first half of an NFL football game in Pittsburgh, Sunday, Oct. 10, 2021. Smith-Shuster was injured on the play and left the field. (AP Photo/Don Wright)

ENGLEWOOD, Colo. (AP) — The Denver Broncos are haunted by a trifecta of troubles.

They can't punch it in.

It added up to a 27-19 loss at Pittsburgh, where they were beaten by a creaky quarterback they made look young again.

The Broncos (3-2) stretched their NFL-long streak to 24 consecutive games without a touchdown on their opening drive, and it took them seven possessions to find the end zone Sunday.

They once again had trouble converting on third downs (2 for 12). Denver is now dead last in the league with a 28.6% conversion rate.

The Broncos were 1 for 3 in goal-to-go situations, settling for a field goal after reaching the 2 and throwing an interception from the 3.

After a creative call on fourth-and-goal from the 2 that resulted in Kendall Hinton's first career touchdown, Pat Shurmur's unimaginative play call on fourth-and-goal from the 3 in the waning seconds sealed the Broncos' second straight loss. Four receivers lined up against seven drop-back defenders and all were well covered when Teddy Bridgewater's throw to Courtland Sutton was picked off by James Pierre.

No misdirection. No trailing tight end. No throw-them-off-the-scent trickery. Just a hope and a prayer that had no chance and didn't come close.

A day after saying the offense was a concern, however, coach Vic Fangio said Monday he had no problem with his much-criticized offensive coordinator.

"I've got no qualms with Pat other than, you know, our results haven't been good enough, and we've got to find a way to fix that.”

The Broncos began Sunday with an embarrassing delay-of-game penalty on their first drive.

“Yeah, we just lost sight of the play clock there on the change of possession and got surprised by it,” Fangio said. “Shouldn't happen, but it did.”

That sums up the Broncos the last two weeks, when they dared Lamar Jackson to beat them through the air and he did, and they loaded up to stop the run in Pittsburgh and they couldn't.

A team that was last in the league with 55 rushing yards a game burned the Broncos for 147 yards, 122 of them by rookie Najee Harris.

Slow starts have long been the Broncos' bugaboo, but Shurmur is now 0 for 21 on opening drive touchdowns in Denver.

“We just got to have some energy,” Bridgewater said. “We might need to do like the colleges and go goal line in pre-game or something, just bash heads or something to get the blood flowing, the juices flowing.”

Nothing else has worked since the last time they scored a TD on their opening drive, at Houston on Dec. 8, 2019.

One factor in Sunday's slow start might have been the Broncos' late arrival in Pittsburgh, where it's wedding season and the team couldn't find ballrooms for their Saturday walk-through and team meetings, which they held in Denver before catching a late flight out.

Being creatures of habit, a late arrival and early start may have thrown them off-kilter and played a factor, however small, in Kyle Fuller surrendering a 50-yard touchdown on Pittsburgh's opening drive and the Broncos failing to get a first down until the second quarter.

Fourth downs. Or they were. They were 8 of 8 on the season until Bridgewater's first interception as a Bronco.

Denver's secondary, the most expensive in the NFL, has been exposed by the young and unorthodox Jackson and the old and fading Ben Roethlisberger.

Hinton, last year's emergency fill-in when all of Denver's QBs were quarantined, caught his first TD pass and set up Denver for first-and-goal in the final minute with a 23-yard catch.

A week after putting the Baltimore loss on his shoulders, LT Garett Bolles was whistled for holding on a takedown more worthy of the octagon than the gridiron.

59 — yards gained by Chase Claypool on a play in which he found himself lined up against linebacker Von Miller. “Yeah, we were in a zone there,” Fangio said. “And when we’re in a zone, he can end up on anybody, really, and we just didn’t play it well enough across the board.”

Start fast and finish strong against the Raiders this weekend or questions will continue to swirl about Shurmur's job status, and even Fangio's.