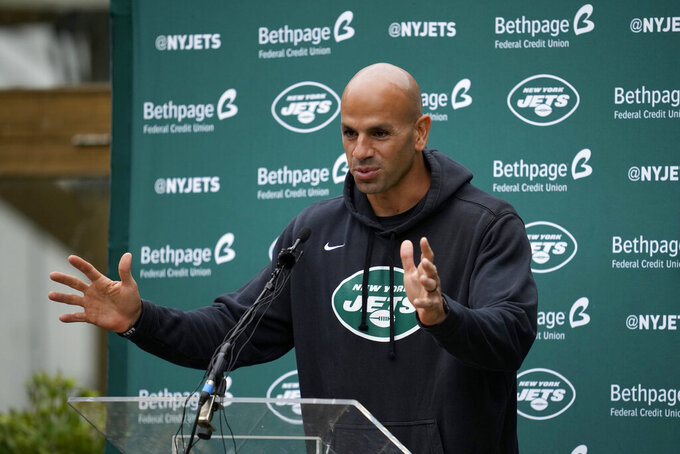 New York Jets' Robert Saleh gives a press conference before an NFL practice session at Hanbury Manor Marriott Hotel and Country Club near the town of Ware, in south east England, Friday, Oct. 8, 2021. The New York Jets are preparing for an NFL regular season game against the Atlanta Falcons in London on Sunday. (AP Photo/Matt Dunham)

They're playing as though they are anyway.

Sounds funny — and sad — but consider this: The Jets have zero points and a measly 79 total yards in the first quarter through five games. They're 2 for 11 on third down in that span. Zach Wilson is 5 of 18 for 34 yards with two interceptions.

“I don’t know what it is,” Wilson said after the Jets' 27-20 loss Sunday to Atlanta in London. “We have got to figure that out over this bye week, how to fix that. I’ve got to play better at the start as well.”

That's on coach Robert Saleh and offensive coordinator Mike LaFleur to solve because it's putting the Jets in early deficits — they've been outscored 30-0 in the opening quarter — and putting added stress on a defense that has already been hit with some key injuries.

A look at the totals through two quarters shows things don't get much better before halftime. New York has scored just 13 points — while opponents have scored 75 — and been outgained in total yardage 1,031-420 in the first half this season. Compare that to the third and fourth quarters, where the Jets have scored 54 points with 915 total yards on 731 passing, 184 rushing.

Granted, the passing yardage is also a product of them needing to catch up late in games, but you get the point.

"Slow starts, it's something we'll get fixed," Saleh said Monday. “We dig a hole and we come to life in the second half. It's just too little too late.”

Wilson followed a solid performance against Tennessee last week with another dud Sunday. He was 19 of 32 for 192 yards and an interception, his NFL-leading ninth.

He also needs some help from LaFleur, a first-team coordinator who's still learning how to run an offense and has repeatedly placed the blame for the Jets' struggles on himself. It appears execution, or lack of it, has been the major culprit for the offensive woes, not lack of preparation.

But it has all added up to what everyone has seen so far on offense this season, which hasn't been much.

Saleh and his coaching staff this week. There are plenty of things the staff needs to improve upon, and the Jets coaches will spend a big part of this week reassessing everything, with the hopes the Jets will come out of their break looking like a team with promise.

“They’re going to study, obviously study the tapes, study what they’re asking of the players,” Saleh said, “and then at the same time, just find ways to get our guys ready to roll and start the game.”

Wilson making “boring” plays. Several times through the first five games, the rookie quarterback has missed short-yardage plays right in front of him — setting his sights further downfield instead of high-percentage throws. Saleh and LaFleur are stressing to Wilson that it's OK to check the ball down, just as long as the Jets keep the ball moving. Wilson has also shown he has been more effective in an up-tempo offense, and perhaps starting a game that way could tilt the first-quarter struggles.

LG Alijah Vera-Tucker. The No. 14 overall pick dealt with a pectoral injury that kept him out for the preseason and hindered his progress, but he has come on strong lately. Vera-Tucker has been one of Pro Football Focus' top-rated offensive linemen the past two weeks, and he allowed no pressures, hits or sacks on 39 pass-blocking snaps against Atlanta.

DT Nathan Shepherd. The 2018 third-rounder has been a regular part of the Jets' defensive rotation, getting six tackles and three quarterback hits. But he also has had a whopping five penalties called against him, and all in the past two games — two against Atlanta and three vs. Tennessee. With the Jets trailing 10-0 early in the second quarter, Shepherd was called for roughing the passer on a third-down play that helped the Falcons score a touchdown.

Saleh said there were no new injuries to report from the game in London. There's hope S Marcus Maye (ankle) and LB Jarrad Davis (ankle) could return for New York's next game.

5 — That's the number of first downs the Jets have had — total — in the first half this season. That's 10 quarters worth of going nowhere.

The Jets will have the players work through Wednesday before giving them four straight days off on their bye week, as required by the collective bargaining agreement. They'll reconvene next Monday and begin preparations for a road game at New England.