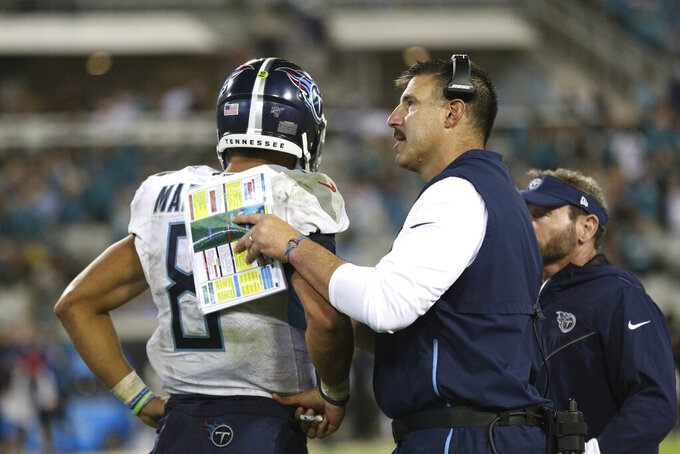 Tennessee Titans quarterback Marcus Mariota (8) gets words of encouragement from head coach Mike Vrabel during an NFL game against the Jacksonville Jaguars, Thursday, Sept. 19, 2019, in Jacksonville, Fla. The Jaguars defeated the Titans 20-7. (Margaret Bowles via AP) 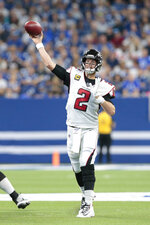 Ryan's six interceptions are a big reason the Falcons (1-2) have a minus-4 turnover differential. His red-zone interceptions have made it even more difficult for the Falcons to overcome their high penalty totals.

Mariota has no interceptions but his inconsistent play and lack of production have been criticized in the Titans (1-2) two straight losses. Mariota threw only one touchdown pass in the two losses, none in last week's 20-7 loss to Jacksonville.

Mariota said offensive coordinator Arthur Smith is "doing a great job of allowing our guys to get open."

"I've just got to complete them," he said.

Titans coach Mike Vrabel shifted focus to fundamentals in the longer 10-day practice slot since the loss to Jacksonville.

The Falcons had 16 penalties in last week's 27-24 loss at Indianapolis. They have 35 penalties in three games, tied with Cleveland for the NFL lead.

Coach Dan Quinn said it is unrealistic to expect the Falcons to beat other teams when they're hurting themselves with turnovers and penalties. He brought in a full crew of officials for this week's practices.

"We've got to get the part where we just get to fight one team," Quinn said. "If we do that, we know what we're capable of, but because we haven't done that, we're in the situation we are where we're sitting at 1-2. ... The urgency for us, for sure, is on point."

Atlanta trailed by a combined 41-3 margin at halftime of its losses to Minnesota and Indianapolis, including 20-3 last week to the Colts. The Falcons finally found their offensive rhythm in the second half last week, when Ryan completed 22 of 23 passes for 216 yards and three touchdowns. His only interception came in the first half.

"When we're all doing it together, we've moved the ball really well throughout the first three games," Ryan said.

Here are some things to know about the Titans' first visit to Atlanta since a 23-17 loss at the Georgia Dome in 2011:

Penalties also are a renewed focus for the Titans. Tennessee set a franchise record last season with an NFL-fewest 82 penalties in a 16-game season. The Titans are coming off a game when they were flagged a season-high nine times for 101 yards, including five holding penalties in the first half.

The Titans have allowed an NFL-worst 17 sacks. Mariota has been sacked more times through three games than any NFL quarterback since 2002. Help is coming. Three-time Pro Bowl left tackle Taylor Lewan's four-game suspension for testing positive for performance enhancers ends this week. The Atlanta defense has only five sacks.

Falcons punter Matt Bosher, inactive last week, could return from a groin strain. His replacement, Matt Wile, was released early this week before being signed to the practice squad. It's a delicate situation for the Falcons, because Bosher also handles kickoffs.

Bosher's injury in pregame warmups two weeks ago forced Matt Bryant to handle kickoffs for the first time in a decade, and only after wide receiver Mohamed Sanu was given practice kicks. If there is any uncertainty about Bosher's injury, Wile could be brought back to the 53-man roster for the game.

The Titans had the second-best defense last season when backed up inside their 20, giving up touchdowns only 44.7 percent of those trips. That has been a major issue for coordinator Dean Pees' unit through three games. The Titans have allowed six TDs on seven chances inside the red zone.