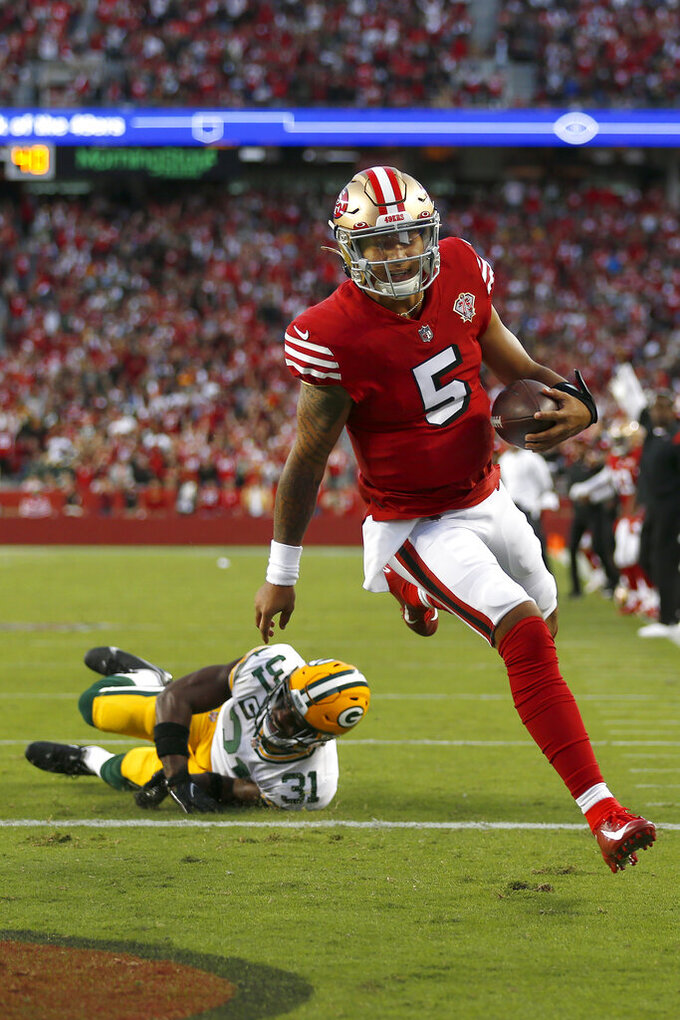 SANTA CLARA, Calif. (AP) — The solution for the San Francisco 49ers' slow starts on offense won't be a quick change at quarterback.

After watching his offense sputter for most of the first half the past two weeks, coach Kyle Shanahan said Wednesday that getting rookie Trey Lance in for more plays in place of starter Jimmy Garoppolo won't help change that.

The Niners have scored just once in the opening quarter all season on a pass from Lance to Trent Sherfield in the opener against Detroit.

San Francisco has been outgained by more than 100 yards in the first quarter of each of the past two games and ranks 31st in yards (98) and 28th in yards per play (3.92) in the opening 15 minutes.

“It really comes down to getting the play run the right way," Garoppolo said. "I think just little details with it. Even if they show us something that we haven’t really planned for as an offense, we still have to be able to execute it."

While Lance threw the early TD pass in the opener, he hasn't gotten much playing time so far this season despite hints that he could be mixed in more extensively.

Lance has played just seven snaps in three games, also running for a TD last week against the Packers.

Garoppolo has been fairly efficient after the slow starts but hasn't delivered the big plays as he has only one deep completion and ranks third lowest on his average depth of target.

“There’s not a quarterback battle right now," Shanahan said. "We’re going with our starting quarterback who I think is playing very well. I’m happy that he is, so Trey is not thrown into any situations he has to do too early. If he ever is thrown into that, then I know Trey will deal with that and he’ll get better as it goes, but we have a luxury where we don’t have to do that yet to Trey or to our team. So, hopefully we won’t have to.”

The Niners did add a cornerback on Wednesday, signing 10-year veteran Buster Skrine to provide depth outside and in the slot. Skrine has played 151 games in his career, spending last season in Chicago. He could need a little time to get up to speed.

San Francisco has issues at cornerback with Jason Verrett out for the season with a knee injury, slot cornerback K'Waun Williams sidelined for at least this week with a calf injury and Josh Norman's status undetermined after he left Sunday's game with a bruised lung that sent him to the hospital.

Norman didn't practice Wednesday and will need to pass additional tests before being cleared to play.

Despite those absences, the Niners weren't able to bring back Richard Sherman, who signed with Tampa Bay on Wednesday after spending the past three seasons in San Francisco. The 49ers had been in contact with Sherman but wanted to wait before making a move.

“We were hoping he was going to be there for a while so when it made sense for both of us, we could do it,” Shanahan said. "But we lost that opportunity because Tampa came through and it just wasn’t the right timing for us.”