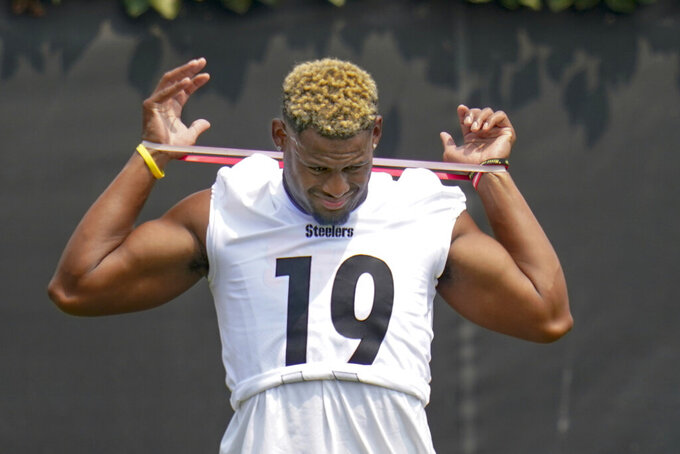 Roethlisberger’s restructured deal helped the Steelers free up enough money to persuade wide receiver JuJu Smith-Schuster to return to the team on a one-year deal. Smith-Schuster decided to stay in Pittsburgh rather than leave in free agency, citing a sense of loyalty.

“For me, I think it was more so the loyalty and staying with the quarterback I’ve been playing with for the last four years,” Smith-Schuster said.

Smith-Schuster, the Steelers’ 2017 second-round pick, said that he turned down opportunities to play in Baltimore and Kansas City.

“Patrick Mahomes is a great quarterback, and he will be for the next decade, but I think it’s just the loyalty to my coaches and my quarterback,” Smith-Schuster said. “If I went to the Ravens, I’d still have loyal fans (in Pittsburgh), the rivalry is big and fans would destroy me. The Chiefs have a great offense, being able to play with Tyreek (Hill) and Travis (Kelce), but at the end of the day, I have to do what’s best for me, and that’s staying home. It makes everything easier on me going into next year, and next year’s free agency is a lot better.”

Smith-Schuster, who signed an $8 million deal, said that staying in Pittsburgh also makes financial sense. The salary cap is expected to take a significant leap next year after going down in 2021. Smith-Schuster said that there could be more lucrative opportunities if he hits the open market next spring. He hasn’t ruled out a long-term return to Pittsburgh, either.

“Everything was different with the cap being low,” Smith-Schuster said. “Next year is obviously a year where the cap is going to be better. This year, I just have to go out there, do what I have to do and put stuff on tape to make my value even better.”

The 24-year-old Smith-Schuster was a Pro Bowl selection in 2018. He is the only NFL player since the 1970 AFL-NFL merger to register at least 250 receptions, 3,300 receiving yards and 21 receiving touchdowns before his 24th birthday.

Last season, Smith-Schuster was one of the NFL’s top receivers out of the slot. This season, he wants to play more on the outside.

“Being able to play outside, you’re adding more to your craft,” Smith-Schuster said. “Year two, the best year I had as a Pittsburgh Steeler, I was playing more outside than inside. It just adds another threat, and with Ben, you don’t know where the ball’s going to go.”

Smith-Schuster set career marks with 111 receptions and 1,426 yards in 2018. Last season, he ranked fifth in the AFC and ninth in the NFL with 97 catches. Smith-Schuster, who finished with 831 yards, was tied for fourth in the conference and ninth in the league with a career-best nine touchdowns. He ranked second in the NFL in third-down receptions, and was tied for second in third-down catches that resulted in a first down.

“I try to lead by example with action,” Smith-Schuster said. “I don’t say a whole lot, and if I do, it’s rare. I’ll let that up to Ben and some of the other guys to speak for the team.”

Smith-Schuster still leads a wide receiver group that is a strength of the offense. Roethlisberger will play his 18th season behind a revamped offensive line, as the Steelers seek to improve a run game, which finished last in the NFL in yards rushing in 2020.

“We have some weapons and the chemistry is already there,” Smith-Schuster said of the receivers. “We’ve had guys that have been on the team two or three years now.”

Claypool said Smith-Schuster played a significant role in his development.

“JuJu looks great, and he’s getting better every year,” Claypool said. “He’s a good leader, he’s a funny dude and he’s relatable. I lean on him whenever I need a good laugh or a piece of advice.”

Smith-Schuster looks to continue and evolve in his fifth NFL season and make another impact during the offseason in free agency.

“I have to play my butt off because I don’t know what’s going to happen next season,” Smith-Schuster said.