Smith strong in 1st start since '18, but it comes in a loss 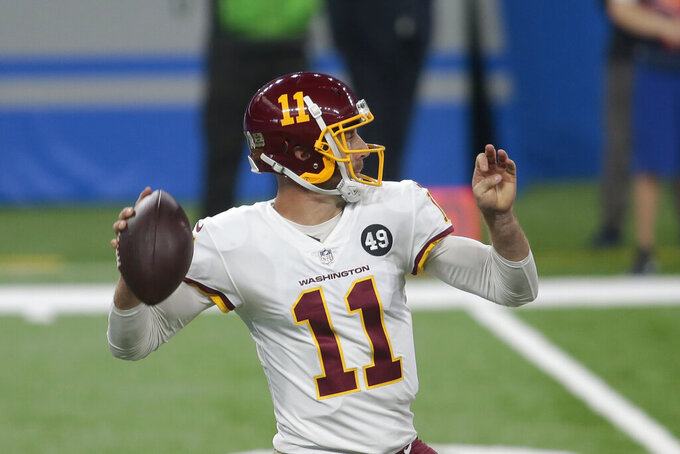 Washington Football Team quarterback Alex Smith looks to throw during the first half of an NFL football game against the Detroit Lions, Sunday, Nov. 15, 2020, in Detroit. (AP Photo/Tony Ding)

His team, on the other hand, fell just short again after another late rally.

Smith's first start since November 2018 nearly finished in storybook fashion when he threw for 390 yards and led Washington back from a 21-point third-quarter deficit. But the Detroit Lions ultimately prevailed 30-27 on Matt Prater's 59-yard field goal on the final play. Smith completed a career-high 38 passes, but his team couldn't completely overcome some missed opportunities in the first half.

Smith appeared twice in relief earlier this season, an inspiring return to the field after he endured a broken leg, 17 surgeries and a life-threatening infection. Detroit was up 24-3 on Sunday before Smith calmly led Washington back.

“I think that was the scary part — is how normal it felt," Smith said. "Felt really normal; a little bit, I've got to pinch myself how lucky I am to feel that way.”

Now the question is whether Smith can guide Washington to a playoff spot, somehow still a possibility despite the team's 2-7 record. NFC East-leading Philadelphia is only 3-5-1.

Washington trailed 20-3 last weekend against the New York Giants before Smith led another big comeback. That one came up short in a 23-20 loss.

Against the Lions. Smith led Washington down the field on the game's first possession and faced second-and-3 from the Detroit 14. Then the next two plays lost a total of 24 yards, leading to a punt.

Washington, the only team in the league that hasn't scored on its opening drive this season, would advance inside the Detroit 35 three more times in the first half. Those drives ended in a field goal, a missed field goal and a fumble. The Lions led 17-3 after two quarters.

“We didn't make plays in the first half,” Washington coach Ron Rivera said. “When you get down to the red zone, you've got to put points on the board.”

There were nevertheless some good signs offensively. Washington finished with 464 total yards and 34 first downs. Much of that was through the air as Smith tried to make up the deficit.

“I thought he played a heck of a football game,” Rivera said. “I think he's getting more and more comfortable back there.”

Washington scored three straight touchdowns, tying the game at 24 with 6:09 remaining in the final quarter. After a Detroit field goal, Smith led a 17-play, 66-yard drive that ended when Dustin Hopkins connected from 41 yards to tie it at 27. That drive was kept going by a pass interference call on fourth down.

Detroit still had 16 seconds left after that kick, and a roughing-the-passer call on rookie Chase Young helped the Lions set up the final field goal by Prater. That spoiled an otherwise impressive day for Smith.

“I got extended time last week coming off the bench, and then another step here this week, starting and taking all the reps,” Smith said. “It felt good. It felt like I saw it well. I didn't feel like I was hindered at all. Felt like I moved around well when I needed to.”