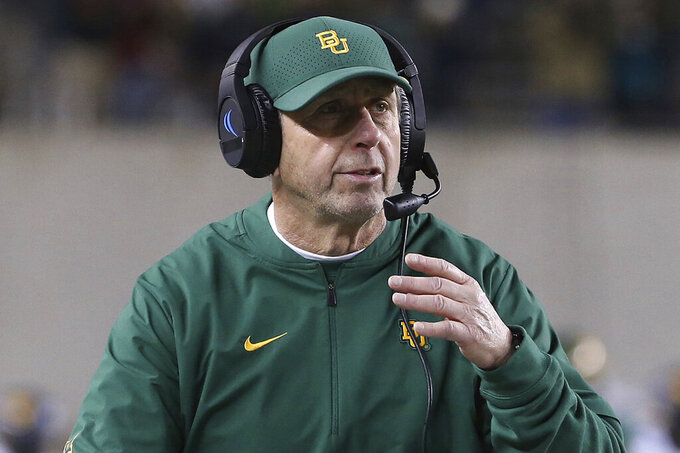 FILE - In this Oct. 31, 2019, file photo, Baylor defensive coordinator Phil Snow walks the sideline in an NCAA college football game against West Virginia in Waco, Texas. Carolina Panthers new defensive coordinator Phil Snow has a monumental task ahead of him, returning the once proud Carolina defense to among the best in the league without retired linebacker Luke Kuechly. Carolina's defense is coming off a season in which they allowed 29.4 points per game, the second-most in the league. (AP Photo/Jerry Larson, File)

The energetic 64-year-old Snow is tasked with rebuilding a once-proud defense that sustained an enormous falloff last year allowing 29.4 points per game — second most in the NFL. He’ll have to do it with an almost entirely revamped defense against the likes of three potential Hall of Fame quarterbacks in the division in Tom Brady, Drew Brees and Matt Ryan.

Toss in the fact Snow is trying to install an entirely new system virtually rather than in person during the ongoing coronavirus pandemic and it may feel a little like all the odds are stacked against him.

But he's taking it in stride.

“Hey, there's really no excuses in this game and nobody wants to hear them — and we don't give them,” Snow said, who followed head coach Matt Rhule to Carolina after working as his defensive coordinator at Baylor and Temple. “It would have been a better situation if we had been on the field the last 2 1-2 months obviously, but it is what it is.”

But Snow expects two-time Pro Bowl defensive tackle Kawann Short to return to a high level of play after missing last season with a shoulder injury. Snow appears confident young cornerback Donte Jackson will bounce back following a season in which he was benched.

The Panthers added a few pieces in free agency, including end Stephen Weatherly, linebacker Tahir Whitehead and versatile defensive back Juston Burris, but for the most part the plan is to built around youth.

The Panthers used all seven draft picks in April on defense, the first team to do that in the Super Bowl era. Snow is counting on big things from them, saying “these rookies are going to have to play.”

Like most NFL coaches, Snow is eager to get on the field and see what his players can do — or at least meet them in person. He's only greeted a few players since his arrival in Carolina.

“I haven't seen these guys move in person, and you'd really like to see each guy move in person so you know what they can and can't do," said Snow, who started coaching at college’s highest level in 1982 with Boise State He's had one previous stint in the NFL as a defensive assistant and linebackers coach with the Detroit Lions from 2005-08.

Carolina will return to a base 4-3 defense under Snow following a failed experiment in the latter years of the Ron Rivera regime. That means Weatherly and last year's first-round draft pick Brian Burns move back to more conventional defensive ends spots. Short and first-round draft pick Derrick Brown will anchor the middle of the line.

Snow said Whitehead will replace Kuechly at middle linebacker, and Shaq Thompson will remain on the outside.

The Panthers focused on acquiring versatile players in the secondary, particularly safeties who can play cornerback as well as and come up and play in the box. Burris and rookie Jeremy Chinn fit that category. He likes that idea because the Panthers won’t have rely on on-field substitutions as much.

Stopping the run will be the first order of business. The Panthers allowed 143.5 yards per game on the ground last season and a whopping 31 touchdowns rushing.

Snow said stopping the run “gives us a chance.”

If there's one saving grace for Snow this year it's that he's not expected to turn things around in one season. Clearly, Carolina's mission is to begin developing younger players, which will take time. Panthers owner David Tepper seems on board with this mission, emphatically telling fans after the season that building a consistent winner doesn't happen overnight.

“There's no substitute for experience,” Snow said. “The way we all learn is we get our butts kicked. In our business, that's how you learn. There are going to be some growing pains.”

He points out that Rhule didn't have much success in his first seasons at Temple and Baylor, but that success soon followed.

“The first years have not been good,” Snow said. “We've gone in and had to change culture. That's not easy to do.”