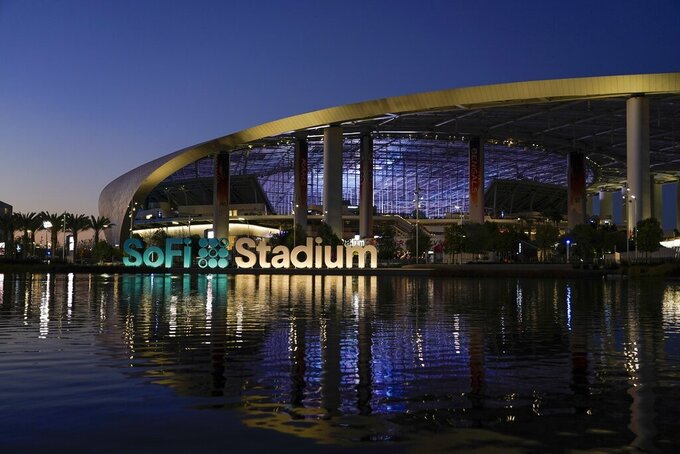 INGLEWOOD, Calif. (AP) — The Super Bowl will come as a culmination of sorts for the NFL’s return to the Los Angeles area, a game featuring the home team that will bring Hollywood glamor to a superstar stadium in Inglewood, where Lakers, Kings and thoroughbreds once thrilled crowds.

“Football was not in LA for a generation,” Rams fan Harrison Bernsen of Los Angeles said as he stood inside SoFi Stadium just before his team beat the San Francisco 49ers for the right to face the Cincinnati Bengals on Feb. 13. “This is how we bring it back in, we use the big games. We host the NFC championship game. We host the Super Bowl. This is our moment. This is LA’s moment.”

Rams owner Stan Kroenke’s sprawling, $5 billion football palazzo that resembles an ocean wave was built to reflect the seaside region around it, and to host the biggest of games.

“When we first drew our first line on paper in 2014, it was for the idea that it would host a Super Bowl someday,” Lance Evans, sports director with HKS Architects and the lead designer of the stadium, said as he sat at the edge of the field. “I can’t wait to see how the NFL, the world stage, the global stage and the fans that are fortunate enough to come and see this building, experience it and the spectacle around it.”

SoFi, which opened mid-pandemic in 2020 and has only had one season of full fan capacity, is staggeringly big — the NFL’s largest stadium in pure size at 3.1 million square feet — while seating more than 70,000, with the ability to accommodate up to 100,000.

Touted as the first indoor-outdoor stadium, its translucent canopy roof diffuses the sunlight and keeps the fans and field cool. Its open sides let in winds from the Pacific Ocean a few miles away.

“When you’re up here, you can feel the air, see the air just brushing through my face,” 49ers fan Rico Iko said as he stood on a high terrace of the stadium. “It’s very Californian, very Los Angeles-like.”

Its proximity to Los Angeles International Airport required SoFi to keep a low profile, so the field is 100 feet below ground, creating what the designers call a “canyon,” which combines with the canopy to make the venue what Evans believes is one of the league’s loudest.

The stadium’s oval, two-sided video board is the largest ever built, hanging improbably over the field with 80 million sparkling pixels beaming 4K replays, stats and advertisements.

“Every seat in the house, you feel like you’re right in the action because of that video board,” Bernsen said.

For the high rollers, including the many celebrities set to take in the Super Bowl, there are 260 luxury suites, beach-club-style “Bungalows” on the end zones, and more than 13,000 posh premium seats, all of them connected to larger clubhouse spaces where well-heeled fans can hang.

Spaces with a similar clubhouse-and-cantina vibe were designed throughout the building, to give more average fans a feeling of leisure and luxury.

After his first visit, one famous fan, the Lakers’ LeBron James, called it “the best stadium in the world.”

It will be the eighth Super Bowl in the LA area, which hosted the first one at Los Angeles Memorial Coliseum. Others were played in Pasadena at the Rose Bowl, including the Rams’ loss to the Pittsburgh Steelers in 1980.

The last one came in 1993. The following year, the Rams and Raiders would both leave, and LA would become an NFL ghost town.

Feints and false starts would mark pro football’s return. Few thought it would take so long.

A 1996 attempt at a move by the Seattle Seahawks was thwarted by the league, which approved an expansion team for LA in 1999 that ended up becoming the Houston Texans instead.

In the decade that followed, Southern California was primarily used as a bargaining chip for NFL owners trying to get their cities to fund new stadiums.

In 2008, developer Ed Roski proposed and commissioned designs for an $800 million stadium complex he dubbed “Grand Crossing,” for its location in the City of Industry with easy freeway access to much of the region.

In 2011, AEG, the company that built what was then known as Staples Center, proposed a $1.7 billion stadium, Farmers Field, near downtown LA adjacent to the arena.

But neither of the ventures ever had a team attached, and the league never embraced them.

Enter Kroenke, who had a major edge his competitors lacked: an NFL team in his deep pockets, and the ears of his fellow owners.

He bought a 60-acre plot in Inglewood, then partnered with Stockbridge Capital, owner of an adjacent 237 acres where Hollywood Park horse race track sat empty. He quietly began work on the site in 2015.

One last competitor would emerge. The Chargers and Raiders jointly proposed a stadium, a $1.8 billion project on a former landfill and golf course in Carson in LA County’s South Bay.

In 2016, NFL owners sided with Kroenke, approving his project and a Rams move, with the Chargers having an option to leave San Diego and join them, which they took.

Formal groundbreaking took place in 2017 on the City of Champions Revitalization Project, which used a nickname for Inglewood that hadn’t applied to it in many years.

To many, Inglewood was then best known as the place that Dr. Dre, who will perform during the Super Bowl halftime, declared was “always up to no good” in 1999′s “California Love.”

The city of about 100,000 people just south of Los Angeles is the site of the Forum, home to the NBA’s Lakers in their 1980s heyday, and to the NHL’s Kings before both moved to Staples Center. Hollywood Park once hosted Breeders Cups and saw some of Seabiscuit’s most storied victories.

A lake that greets game-goers on the SoFi property is a tribute to the one that horse players once gathered round in the track’s infield.

Its walking paths and picnic tables are open for free to the public year-round, one of the perks, along with promises of an economic and employment boom, that the stadium tried to provide Inglewood, a largely low-income community where few residents can afford even a regular season NFL ticket.

Some saw rents spike beyond their means and had to leave when the stadium went up. Homeless encampments near the stadium were recently cleared as the Super Bowl approached.

And the building boom shows no signs of slowing. The NBA’s Clippers are erecting an arena in Inglewood. NFL offices, entertainment venues and retail stores and restaurants are blooming around SoFi, which will soon host Wrestlemania and the college football national championship game, and is all-but-certain to host World Cup games and Olympic events in the coming years.