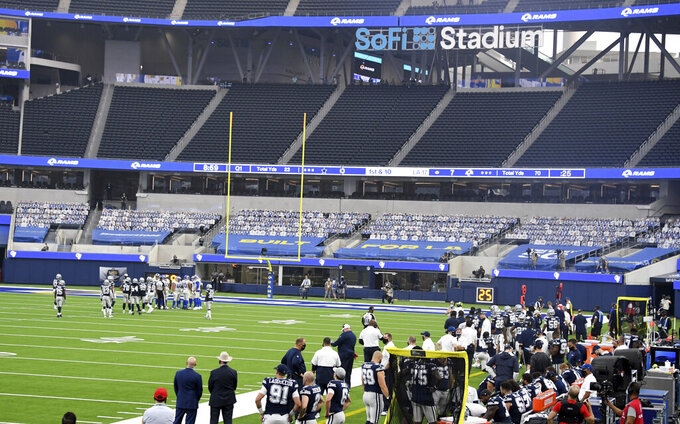 Los Angeles Rams and the Dallas Cowboys in the first half during a NFL football game on opening night at SoFi Stadium in Inglewood on Sunday, September 13, 2020. (Keith Birmingham/The Orange County Register via AP)

NEW YORK (AP) — One of the NFL's two new stadium sites will serve as a voting center as the Los Angeles Chargers and Rams are making SoFi Stadium a venue for election support.

The NFL also announced Tuesday on Voter Registration Day it is joining with two groups to recruit workers for polling places and to get out the vote.

The Rams and Chargers increase to 14 the number of NFL franchises allowing their sites to be used for the upcoming election. A voting center outside their stadium will open Oct. 30, and a vote by mail drop box will be available starting Oct. 5.

“With 41 days until the election — and the voting period officially starting in some states — we encourage everyone in the NFL family, including fans, to register if they are eligible to do so,” said Kenneth Edmonds, NFL vice president of government affairs. "The clubs who have made their facilities available to host polling activities help to make it even easier for fans to participate in our democratic process and make their voices heard in the upcoming elections.”

The league itself has joined the Civic Alliance’s “Election Day of Service,” a national movement to help recruit 250,000 new poll workers. And the NFL has launched a campaign entitled “NFL Latinos Vote” for Latino fans.

The NFL is encouraging employees and fans to serve as poll workers on Election Day. Protocols during the COVID-19 pandemic have reduced capacity at existing polling places due to social distancing. Many recent poll workers, half of whom are over age 60, have or are expected to opt out of serving this year.

The Civic Alliance notes election experts across the country are expressing concern there might not be enough poll workers to meet the demand. As many as 500,000 new poll workers need to be identified to keep polls open this November, the organization estimates.