Some wonder if Brown will blow up the Patriots, too 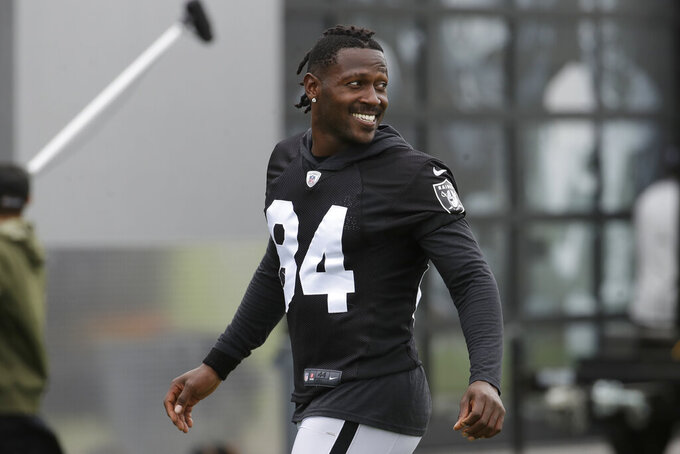 As far as critics are concerned — along with fans of the Steelers, Raiders and even some Patriots backers — A.B. is TNT.

Antonio Brown didn't play a down on opening weekend but grabbed the headlines nonetheless for forcing his way out of Oakland and landing with the defending champion Patriots eight months after quitting on the Steelers.

"Seeing him catch balls from Tom Brady would be beautiful," NBC analyst Tony Dungy said. "But he's going to have to change if this is going to work."

Brown's penchant for drama followed him from Pittsburgh to Oakland, where he spent his summer recovering from frostbitten feet in a cryotherapy mishap, fighting with the league over his desire to wear an outlawed helmet, feuding with his general manager and constantly posting updates to his saga on social media.

"I really think this sent the wrong message," Dungy said. "I know coaches want to win, but I'm disappointed in Robert Kraft. I think at some point you say, just as an organization, 'We are not going to do this.'"

Brown couldn't sign until Monday, so he missed New England's 33-3 wipeout of the Steelers , a dismantling that suggests the Patriots don't need much help defending their latest title.

While Belichick gives newcomers a clean slate, Brown has "always been a 'me' guy," Harrison said. "I'm not a big believer he's going to come in and fit in the 'Patriot Way.'"

Other notable Week 1 decisions, when Odell Beckham Jr.'s Browns debut was most notable because he was wearing a $250,000 watch during the game:

Every year there's angst in the preseason over a new NFL rule, and come opening weekend the fuss seems rather frivolous. This time, it was the league's new pass interference policy allowing coaches to challenge both calls and non-calls.

In the preseason, there were 15 challenges to flags that were thrown for pass interference and zero were overturned. Of the 29 challenges for non-calls, seven resulted in a penalty upon review.

The rule stemmed from officials' failure to flag a blatant penalty in the NFC championship, and the lack of a flag for pass interference or roughness helped the Rams beat the Saints and advance to the Super Bowl.

While it's likely to come into play this season and have a major impact on a game's outcome, the new rule was largely inconsequential on opening weekend.

Coaches went 1 for 4, with the Buccaneers' Bruce Arians lodging the only successful P.I. challenge.

Arians threw his flag after an incomplete deep pass from Jameis Winston to Mike Evans in the first quarter, saying 49ers cornerback Richard Sherman should have been flagged. Upon review, the officials agreed and penalized Sherman.

The Packers (for a non-call), the Vikings (for a call) and the Seahawks (just because) all lost P.I. challenges.

Indy's loss to Kansas City in the playoffs on Jan. 12 turned out to be Andrew Luck's final game , but at the time, Colts fans feared it was Adam Vinatieri's farewell after he missed an extra point and a 23-yard field goal.

Vinatieri returned at age 46, but his 24th NFL season got off to a horrible start Sunday with the worst game of a storied career that features four Super Bowl rings.

Vinatieri missed an extra point and two field goals for the first time in his career, which spans 386 games, including playoffs. The misses came from 26 and 49 yards in regulation of the Colts' 30-24 overtime loss to the Chargers.

"I feel lousy because the guys played their butts off against a really good Chargers team and they played well enough to win," Vinatieri said. "I didn't help them out."

IN STAFFORD WE TRUST

Top overall pick Kyler Murray wouldn't have had the chance to rally Arizona from an 18-point fourth-quarter deficit to tie Detroit 27-27 were it not for a blunder by the Lions coaching staff.

A livid Matthew Stafford was caught by television cameras appearing to twice say, "Trust me!" after the sideline called a timeout as the play clock was winding down before a third-and-5 play in the fourth quarter.

Stafford found J.J McKissic on a screen pass that likely would have iced it were the play not blown dead.