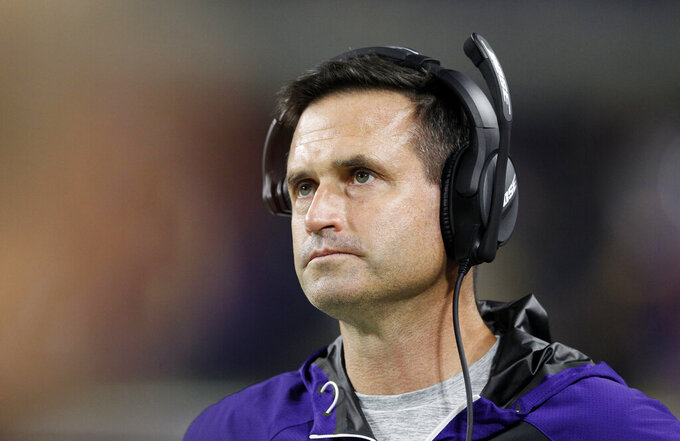 FILE- In this Dec. 1, 2016, file photo, Minnesota Vikings interim head coach Mike Priefer watches from the sideline during the second half of an NFL football game against Dallas Cowboys in Minneapolis. Former Vikings assistant Priefer will handle special teams for new Cleveland Browns coach Freddie Kitchens. Priefer, who was suspended three games by Minnesota in 2014 for an insensitive remark, released a statement Friday, Jan. 11, 2019, saying he is coming to Cleveland. (AP Photo/Andy Clayton-King, File)

CLEVELAND (AP) — The Freddie Kitchens Era, although still not official, is rolling along.

While his agent continued to hammer out details for him to become Cleveland's new coach, Kitchens continued to piece together his staff with the Browns. On Friday, former Vikings coordinator Mike Priefer announced he will handle special teams for Kitchens.

Kitchens and the Browns reached agreement earlier this week, but as of Friday night the team had still not confirmed his hiring. There don't appear to be any major obstacles to prevent Kitchens from being named the team's 17th full-time coach.

Priefer, who was suspended three games by Minnesota in 2014 for an insensitive remark, released a statement saying he's coming to Cleveland to work for Kitchens. Priefer spent the previous eight seasons coaching special teams with the Vikings.

"I am excited to work with Coach Kitchens, John Dorsey and the entire Browns organization," Priefer said. "I will always remember my time spent with the Vikings and deeply appreciate everyone that I was able to work with during my time there."

Priefer has some Cleveland roots. He was born in Cleveland and his father, Chuck, began his coaching career in Northeast Ohio before getting to the NFL as a special teams coach.

Priefer also has some baggage.

The Vikings have suspended him without pay for the first three games in 2014 after an independent investigation into claims by former punter Chris Kluwe showed that Priefer made a homophobic remark during the 2012 season. Priefer later and had his suspension was reduced to two games.

"I regret what has occurred and what I said," Priefer said four years ago. "I am extremely sorry but I will learn from this situation and will work on educating others to create more tolerance and respect."

By all accounts, Priefer has been a model citizen since and he's proven to be a solid coach. He's been in the NFL for 17 years, also working in Denver and Kansas City as a coordinator for special teams units that have consistently ranked high in the league.

Priefer will replace Amos Jones, who is not coming back to the Browns after one wobbly season as special teams coordinator. The Browns' kicking game struggled under Jones and the team's return game was average at best.

Kitchens also met on Friday with fired Arizona Steve Wilks about becoming his defensive coordinator. The 49-year-old Wilks was dismissed after going 3-13 season. He's got a strong defensive background and previously ran Carolina's defense in 2017.

Wilks served as the Panthers' defensive backs coach from 2012-14 and was promoted to assistant head coach in 2015-16. He's also been a secondary coach in Chicago and San Diego.

Former Denver coach Vance Joseph was scheduled to visit the Browns over the weekend, but he was hired by new Cardinals coach Kliff Kingsbury on Friday.