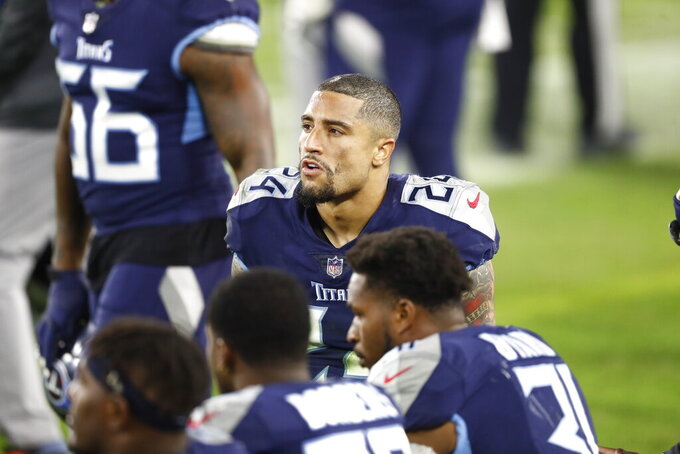 Tennessee Titans strong safety Kenny Vaccaro (24) sits on the sideline in the second half of an NFL football game against the Indianapolis Colts Thursday, Nov. 12, 2020, in Nashville, Tenn. (AP Photo/Wade Payne)

NASHVILLE, Tenn. (AP) — Coming into this season, the Tennessee Titans had only two punters since 1998. Now they've gone through three, plus two long snappers, in as many games.

All that instability showed Thursday night.

Trevor Daniel, signed to the practice squad last weekend, managed only 17 yards on his first punt days after delivering packages for FedEx. He never had a chance on his second as the Indianapolis Colts blocked the kick and returned it for a touchdown in a 34-17 victory over Tennessee.

The loss dropped the Titans to 6-3 with their third loss in four games, and coach Mike Vrabel promised everything will be re-evaluated even as he defended special teams coordinator Craig Aukerman.

“We’ll look at what we’re doing and try to do what’s best for the team like we always do,” Vrabel said. “We all have jobs to do, and we have to try to do them better.”

With the loss, the Titans fell into a tie with Indianapolis atop the AFC South. Their first goal coming into the season was winning the division for the first time since 2008 to earn a home playoff game.

Now, Vrabel said they will take a couple of days off to heal up and figure out what's going wrong on special teams, why a high-scoring offense is suddenly sputtering and how come the defense can't get off the field.

“We've got to play complementary football in all three phases, and that doesn’t happen for 60 minutes right now,” Vrabel said.

Gostkowski became the first Titans kicker to miss eight field goals in a season since Joe Nedney in 2001 — with seven games still remaining. The last kicker for this franchise to miss nine or more was Tony Zendejas with 12 in 1989.

The Titans are already on their second long snapper of the season, and Daniel became the third different punter and holder, with three-time Pro Bowl punter Brett Kern on injured reserve due to an injured wrist.

Tennessee led 17-13 at halftime. Then everything turned.

In the second half, Daniel's first punt gave the Colts the ball at the Tennessee 27. Later, after the Titans went three-and-out, the Colts blocked Daniel's next punt and scooped up the ball for a TD. Gostkowski had the missed field goal, then the Titans turned it over on downs.

Derrick Henry ran for 103 yards, and Corey Davis, playing a day after his older brother, Titus, died of a rare kidney cancer, caught five passes for 67 yards. But A.J. Brown dropped a deep pass from Tannehill in the first half after beating a defender.

The Tennessee defense held Indianapolis to 4 of 12 on third downs, yet the Colts converted three of five fourth downs through the first three quarters.

Ryan Tannehill, who was 15 of 27 for 147 yards with one touchdown, said the Titans have to start playing better, plain and simple.

“We’re just not consistent as a team playing complementary football, playing off of each other,” Tannehill said. “We’re just not making enough plays. We’re going to have to clean that up and get healthy.”

The Titans lost their bye last month when dealing with the NFL's first COVID-19 outbreak of the season. Now they have the weekend off before playing five of their final seven on the road, and Tannehill said they need to clear their minds and return ready to work Monday.

“We can’t wait around any longer,” he said. "We have to take it up a notch and be ready to play our best football every Sunday from here going forward. The onus is on us to take a critical look at ourselves and do whatever it takes to clean it up and make plays on Sundays.”