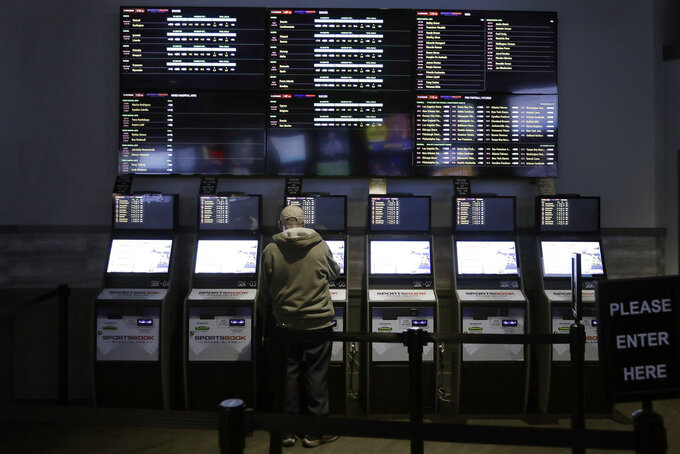 In this Nov. 18, 2019 photo, a patron visits a betting kiosk in the sports betting area of Twin River Casino in Lincoln, R.I. Legalized sports betting's rapid march across the U.S. could face some bigger tests in 2020. Less than two years after a U.S. Supreme Court ruling opened the door to sportsbooks outside Nevada, they have been legalized in states that are home to about one-third of the nation's population. (AP Photo/Steven Senne)

LINCOLN, R.I. (AP) — The line for the ticket windows at a Rhode Island casino's sportsbook stretched to the door on one afternoon last month: Gamblers were cashing in their winnings from betting on the victorious New England Patriots the day before and placing new wagers for that night.

“This happens pretty much every Monday,” said Craig Sculos, vice president and general manager at Twin River Casino Hotel, just north of Providence. “The building takes on this unique rhythm.”

The casino adds extra staff at its sportsbook on Mondays. And since it's the only New England state that has launched sports betting, Rhode Island is the closest place for Patriots fans to legally bet on their team.

This could be the scene in more states in the years ahead. Legalized sports betting has caught on quickly since a U.S. Supreme Court ruling in 2018 allowed for it to be legalized in every state; 2020 will be a test of whether that rapid expansion continues.

Sports wagers can be made legally in 13 states, while sportsbooks have been legalized in another half-dozen where they're not yet running. In all, about one-third of the nation's population lives in a state where legal sports betting has been authorized.

In 2019, the first legal sports bets were made in Arkansas, Indiana, Iowa, New York and Oregon, joining eight states where betting was already running.

Voters in Colorado and lawmakers in Illinois, Montana, New Hampshire, North Carolina and Tennessee also legalized it this year, but the programs have not yet launched. The same is true in the District of Columbia and Puerto Rico. A bill that cleared the Michigan Legislature this month also is expected to be signed into law.

The next sportsbook to open could be in New Hampshire. The state's lottery commission approved having DraftKings, one of the biggest players in sports betting, set up mobile wagering as soon as January.

Whether to legalize sports betting is expected to be debated in 2020 in a number of states, including Connecticut, Massachusetts, Missouri and Ohio — all states where efforts this year fell short.

In Georgia, state Sen. Brandon Beach has been pushing for years to legalize horse racing as a way to promote economic development. He's now trying to get momentum for a constitutional amendment to allow casino betting, horse racing and sports betting in a state that doesn’t have any legalized gambling outside the lottery. He wants to use the revenue to beef up a lottery-funded college scholarship program.

“If we’re going to look at sports betting, we’ve got to look at the whole thing,” said Beach, a Republican.

The Georgia effort is getting pushback from the Faith and Freedom Coalition, which has its headquarters there. The socially conservative group says all forms of gambling can lead to addiction, bankruptcy and crime.

“It causes all of us to pay, whether or not we play,” spokeswoman Virginia Galloway said.

So far, the three most populous states — California, Texas and Florida — have not legalized sportsbooks.

But the industry is watching them, along with the fourth-largest, New York, where bets can be made only in person at four upstate casinos located far from the New York City area's massive population. Whether those four casinos can add online betting without an amendment to the state constitution is under debate.

In California, a group of Native American tribes has proposed a ballot measure for next year. The proposal would cut out rival card rooms and would not provide for online bets. Lawmakers also can propose their own plan for the ballot.

Like in New York, advocates in Florida disagree about whether legalizing sports betting would require voter approval. In Texas, it's clear that a constitutional amendment would be needed. A bill to put one on the ballot didn't get far in 2019, and the legislature isn't scheduled to meet in 2020.

“For those big states, it just takes longer,” said Jake Williams, a vice president at Sportradar, a company that contracts with sports leagues for services including providing data.

As with other gambling offerings, states vary widely on what they're allowing.

In New Mexico, lawmakers never explicitly allowed sportsbooks, but two Native American tribal casinos are offering it, with bets being taken only on site. In Arkansas, bets are being taken only at Oaklawn Racing Casino Resort.

By contrast, bets can be made practically everywhere in the nine states where online sports betting is happening. Online wagering has been allowed but not started in another five states plus the District of Columbia.

But the programs work in different ways. In New Jersey and Indiana, anyone who is eligible and within the state's border can sign up online and start betting. In Iowa, Nevada and some other states, bettors must first register in person at casinos.

Tax rates range from less than 7% of the books' winnings in Iowa and Nevada to more than 30% in Pennsylvania. In states such as Delaware and Oregon, where the lottery owns sports betting, the state's share is even higher.

“We’re seeing an incredible amount of diversity," said Chris Grove, a managing director with Eilers & Krejcik Gaming. “I suspect that will persist."

From July (the start of most states' fiscal years) through October, sports betting generated about $50 million in state tax revenue across the country according to an Associated Press analysis of data from the states.

New Jersey accounted for more than $15 million of that, making sports betting more lucrative for the state than in Nevada, which lost its monopoly after the Supreme Court decision. But states including Rhode Island and West Virginia are falling short of their own projections for revenue.

Rhode Island state Senate President Dominick Ruggerio, a Democrat, the biggest advocate for legalized sports betting in the legislature, is unsure whether the state will hit its $22.7 million target and worries about potential competition from nearby states. But even if it falls short of projections, sports betting is bringing the state revenue it didn't have before, Ruggerio added.

Sculos, the Rhode Island casino executive, views sports betting as another amenity rather than a windfall for casinos or the states where they’re located. But it has drawn people to the casino who had never before visited.

Sculos visited the sportsbook on a recent Sunday when it was full of gamblers clapping and cheering.

“Because all of the television screens are lit up for the NFL games, you have no idea what they're clapping and cheering about, but they were having just the best time,” he said. “That environment is really unique. You see it a little bit at a craps table and a roulette table, but craps might have 10, 12, 15 people standing around it. We could have over 200 people here at once. ... It's a fun place to be.”